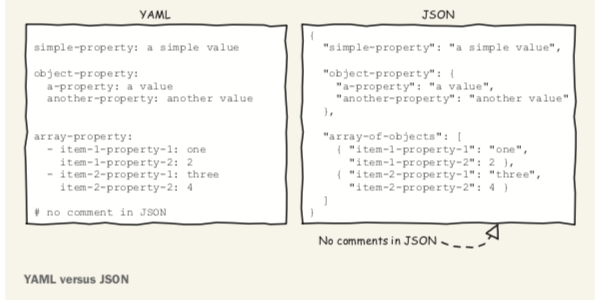 If you are concerned about better parsing speed then storing the data in JSON is the option. I had to parse the data from a location where the file was subject to modification from other users and hence I used YAML as it provides better readability compared to JSON. And you can also add comments in the YAML file which can't be done in a JSON file.

JSON encodes six data types: Objects (mappings), Arrays, Strings Numbers, Booleans and Null. It is extremely easy for a machine to parse and provides very little flexibility. The specification is about a page and a half.

YAML allows the encoding of arbitrary Python data and other crazy crap (which leads to vulnerabilities when decoding it). It is hard to parse because it offers so much flexibility. The specification for YAML was 86 pages, the last time I checked. YAML syntax is obviously influenced by Python, but maybe they should have been a little more influenced by the Python philosophy on a few points: e.g. “there should be one—and preferably only one—obvious way to do it” and “simple is better than complex.”

The main benefit of YAML over JSON is that it’s easier for humans to read and edit, which makes it a natural choice for configuration files.

These days, I’m leaning towards TOML for configuration files. It’s not as pretty or as flexible as YAML, but it’s easier both for machines and humans to parse. The syntax is (almost) a superset of INI syntax, but it parses out to JSON-like data structures, adding only one additional type: the date type.

3
Why yaml is popular? Is there anything else that does better.
0
What's YAML standards for? I just Google and however I cannot find the answer
0
yaml_parse works also with JSON ? what other formats I could use?
2025
How to read a file line-by-line into a list?
1609
How do I write JSON data to a file?
981
How can I parse a YAML file in Python
645
How can I use pickle to save a dict (or any other Python object)?
162
Pickle or json?
71
How is it that json serialization is so much faster than yaml serialization in Python?
51
Should I use YAML or JSON to store my Perl data?
See more linked questions