How do I install pip on macOS or OS X?

Ask Question
Asked 9 years, 7 months ago
Modified 4 months ago
Viewed 2.8m times
1672
This question's answers are a community effort. Edit existing answers to improve this post. It is not currently accepting new answers or interactions.

I spent most of the day yesterday searching for a clear answer for installing pip (package manager for Python). I can't find a good solution.

How do I install it?

then pip3 --version to check.

pip's documentation lists the supported mechanisms to install it: https://pip.pypa.io/en/stable/installation/#supported-methods

It is generally recommended to avoid installing pip on the OS-provided python commands, and to install Python via the official installers or using something like Homebrew or pyenv.

If you're using an end-of-life version of Python, you can use get-pip.py instead.

Old answer (outdated, and results in a broken installation)

If you need admin privileges to run this, try:

Or the following if you have it installed as Python 3

Another GIF image you said? Here you go!

The following used to work in 2019 and before

All you had to do was:

2019: ⚠️easy_install has been deprecated. Check Method #2 below for the preferred installation!

⚡️ OK, I read the solutions given above, but here's an easy solution to install pip.

The macOS comes with the Python environment installed. But to make sure that you have Python installed open the terminal and run the following command.

If this command returns a version number that means Python exists. This also means that you already have access to easy_install considering you are using macOS or OS X.

ℹ️ Now, all you have to do is run the following command.

After that, pip will be installed and you'll be able to use it for installing other packages.

P.S. I ended up blogging a post about it. QuickTip: How Do I Install pip on macOS or OS X?

easy_install has been deprecated. Please use get-pip.py instead.

I'm surprised no-one has mentioned this - since 2013, python itself is capable of installing pip, no external commands (and no internet connection) required.

This will create a similar install to what easy_install would.

You can install it through Homebrew on OS X. Why would you install Python with Homebrew?

The version of Python that ships with OS X is great for learning but it’s not good for development. The version shipped with OS X may be out of date from the official current Python release, which is considered the stable production version. (source)

Homebrew is something of a package manager for OS X. Find more details on the Homebrew page. Once Homebrew is installed, run the following to install the latest Python, Pip & Setuptools:

This Python (v3) also installs pip3. In order to use only 'pip', add an alias:

macOS comes with Python 2, but not with pip. Anyway, it's better to manage it with Homebrew. You must install it before.

WARNING: for a modern macOS (2019) this can install Python 3, and for Python 2 you really need to do: brew install python@2

If you install Python 3, pip will be installed automatically.

As of 2019, now to use pip version 3, use pip3. Or you can execute: python3, to use version 3. When you install packages with pip3 they will be separated from Python 2.

For older versions: You need only to upgrade pip, but before that you need create a virtual environment to work with Python 3. You can use a project folder or any folder:

To deactivate the environment:

pip is available on OS X via easy_install.

Open a terminal and type:

When prompted for a password, enter your normal login password. After the installation has completed, you should be able to use pip as expected.

Note: this works for other Python packages as well

The simplest solution is to follow the installation instruction from pip's home site.

Basically, this consists of:

For those who have both Python 2 and Python 3 installed, here's the solution:

Additionally, if you want to install pip for Python 3.6:

Installing a separate copy of Python is a popular option, even though Python already comes with macOS. You take on the responsibility to make sure you're using the copy of Python you intend. But, the benefits are having the latest Python release and some protection from hosing your system if things go badly wrong.

Now confirm that we're working with our newly installed Python:

...should show a symbolic link to a path with "Cellar" in it like:

Pip should be installed along with Python. You might want to upgrade it by typing:

Formerly, I've used get-pip.py to install pip. But, the docs warn that get-pip.py does not coordinate with package managers and may leave your system in an inconsistent state. Anyway, there's no need, given that pip is now included with Python as of 2.7.9.

Note that pip isn't the only package manager for Python. There's also easy_install. It's no good to mix the two, so don't do it.

Finally, if you have both Python 2 and 3 installed, pip will point to whichever Python you installed last. Get in the habit of explicitly using either pip2 or pip3, so you're sure which Python is getting the new library.

Make sure you are in the same directory as get-pip.py or you supply the correct path for that file.

For details, you can visit: Installation - pip documentation

Then pip will work.

On the recent version (from Yosemite or El Capitan I believe... at least from Sierra onward), you need to run brew postinstall python3 after brew install python3 if you use Homebrew.

According to the official Homebrew page:

On 1st March 2018 the python formula will be upgraded to Python 3.x and a python@2 formula will be added for installing Python 2.7 (although this will be keg-only so neither python nor python2 will be added to the PATH by default without a manual brew link --force). We will maintain python2, python3 and python@3 aliases.

So to install Python 3, run the following command:

Then, the pip is installed automatically, and you can install any package by pip install <package>. 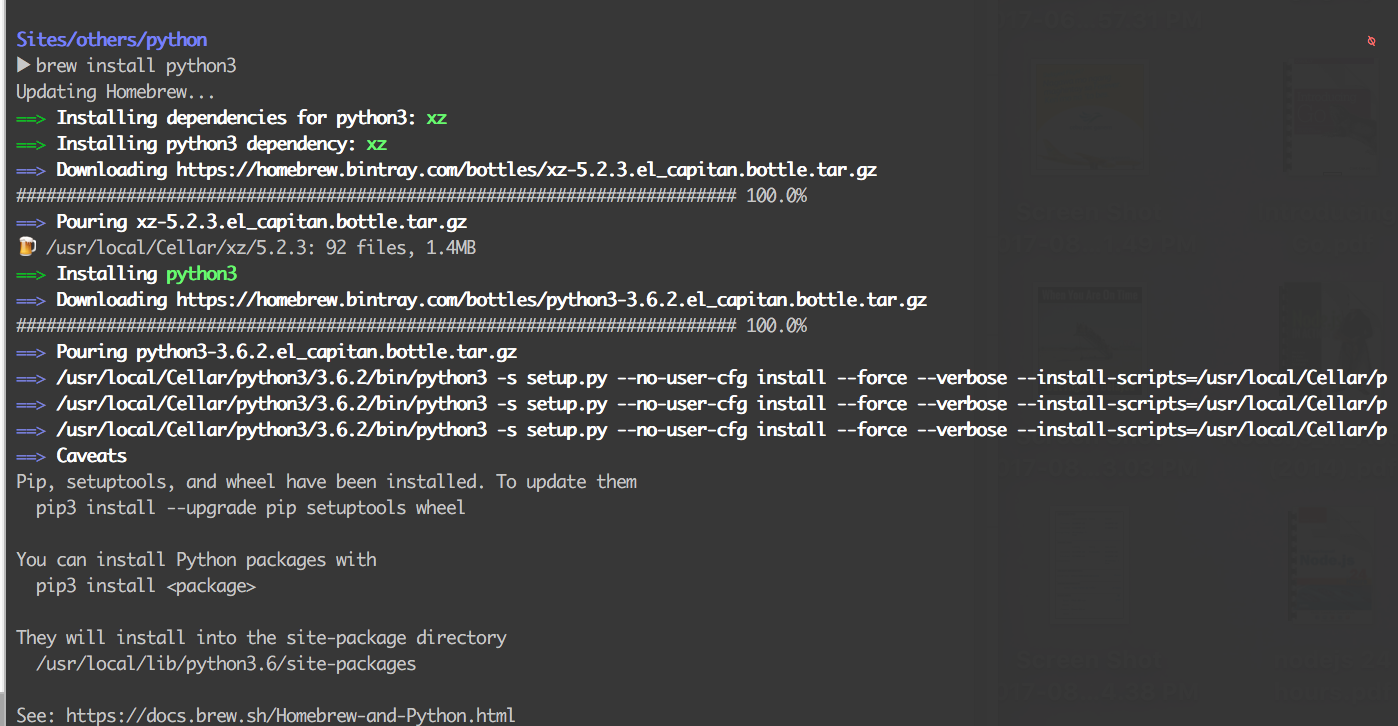 then you can execute

Then update your PATH to include the py27-pip bin directory (you can add this in ~/.bash_profile:

pip will be available in a new terminal window.

Install Python 3 first, and then use pip3 to install packages.

Python 3 will be installed, and pip is shipped with it. To use pip to install some package, run the following

Notice it's pip3 because you want to use Python 3.

Then run the following:

Install without the need for sudo

If you want to install pip without the need for sudo, which is always frustrating when trying to install packages globally, install pip in your local folder /usr/local like this:

Use the tar file.

Once you download, go to the downloaded folder and run

Once you do that, you will have easy_install.

Use the below then to install pip:

If you do not have wget, just open the URL in the browser, https://bootstrap.pypa.io/get-pip.py, and then save as get-pip.py.

I recommend Anaconda to you. It's the leading open data science platform powered by Python. There are many basic packages installed. Anaconda (conda) comes with its own installation of pip.

23
mac os zsh: command not found: pip
0
Upgrading pip uninstalled my pip and now I can't reinstall it on Mac OS X
1
Installing python3-pip / flask on macOs Mojave 10.14.5
176
pip: no module named _internal
147
Can't install via pip because of egg_info error
60
Why is Python easy_install not working on my Mac?
151
Difference between 'python setup.py install' and 'pip install'
115
What are the risks of running 'sudo pip'?
25
No such file or directory: '/usr/local/bin/pip'
35
pyserial: No module named tools
See more linked questions