While installing hadoop in my local machine , i got following error

can some one help me to resolve this error , than changing port number

If install Hadoop on Mac OSX, make sure turn on Remote Login under System Preferences then File Sharing. This worked on my machine. 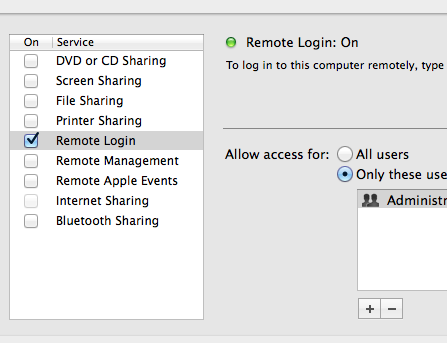 It will solve your problem.

Do you have sshd installed? You can verify that with:

For detailed information you can visit this link.

I had ssh command on my Ubuntu but got the error as you have. After full installation all was resolved.

Check if this port is open. Maybe your SSH demon is not running. See if sshd is running. If not, then start it.

I did all the suggestion above and it did not work. Then I restart the ssh service and it works. This is what I do:

Now I can connect to my localhost. Hope it helps

I use a Mac, this worked for me:

Choose Remote Login, make sure it is on and remember to add required users. 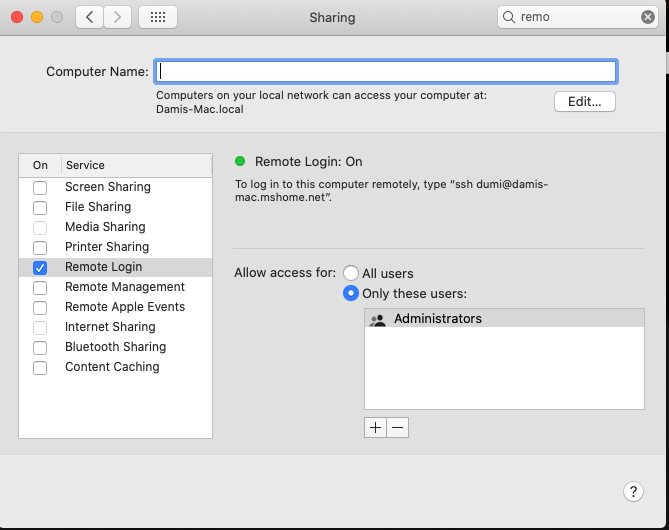 Got it from here

Make sure that /etc/hosts.allow contains:

OR - some other variant

INSURE that the first line in the file DOES NOT begin with ALL:ALL:DENY

NOTHING will be able to communicate with the host... on any port.

If you restart service then it will work

For my case(ubuntu 14.04, fresh installed), I just run the following command and it works!

For what its worth I got the following error trying to ssh into my local machine, running Ubuntu 16.04 Xenial, from a vm.

It got immediately fixed with:

Take note, Before fix: 'which sshd' returned nothing and 'which ssh' returned

And After the fix: 'which sshd' returned

It might be caused by some of the following:

On mac go to system settings->network->sharing and allow remote login.

You should be good.

What worked for me is:

I tried all the above mentioned solutions but somehow this directory /var/run/sshd was still missing for me. I have Ubuntu 16.04.4 LTS. Hope my answer helps if someone has the same issue. ubuntu sshxenial

My port number is different. i tried using

this worked for me

If you still face problems, try the following:

Actually i solved this, I just installed shh daemon.

A way to do is to go to terminal

Problem will be resolve. Thanks

if you are using centOS or Red Hat, you should first update SElinux. Execute the following statement

then you need to execute

If you're certain that you have installed ssh, then it's possible that ssh and/or sshd has been terminated or the server service hasn't been started. To check whether these processes are running use:

It's likely that ssh would be active and running but sshd would not. To enable them:

NB; - some systems have a restart option but mine didn't

See the sshd_config(5) manpage for details

What ports, IPs and protocols we listen for

You may should edit your /etc/hosts. For example if my hostname is ub0, but the hostname in /etc/hosts is localhost, it may occur

Because the hostname in /etc/hosts is localhost not ub0.

So, you should be careful the hostname when building up distributed clusters.

you need to check the configuration in sshd_config ListenAddress 0.0.0.0 update this and restart the sshd service that will resolve the issue.

if you are able to ping and not able to ssh, then it is a firewall. The firewall on 18.4 (not sure about other versions) in on by default and only allow port 8080.

Here how you fix it

Check file /etc/ssh/sshd_config for Port number. Make sure it is 22.

Not the answer you're looking for? Browse other questions tagged linux hadoop ssh or ask your own question.