I recently upgraded to Cordova 2.9.0 from 2.3.0. After following all the upgrade instructions, I was able to get the app to launch in the simulator. However, in Xcode I see the following errors:

This is my config.xml file:

For future searchers (like me!), I had a similar problem trying to add the console plugin to my project. The missing step for me after installing the plugin was to make sure the source files of the plugin (CDVlogger.m) 'target membership' settings included my application names.

Similar question with answer that worked for me:

remove ./plugins/ios.json to make sure the plugins are rebuilt.

I had the same issue. I just downloaded the cordova 3.0 command line tool using node's package manager. I then used the tool from Terminal to create my project, add platforms to it, and build it like this.

After this I saw those same errors in Xcode when I tried to run it in the simulator. It seems by default now PhoneGap does not include any plugins in the project so even if there in your config file they probably won't be in the plugins folder. You have to add them manually or via the command line tool. I used the command line tool because I thought it was easier like so.

After doing this I ran myApp in the simulator again and everything worked fine. There are some good instructions on the command line tool here:

I would like to think if PhoneGap 3.0 needs Logger, Device, and Network Status that it would include those plugins automatically but in my case it did not. Hope this helps.

Edit: In the config.xml for iOS version in Xcode, you'll also need to make this change to get the Logger plugin to work correctly. The following is the default.

Change above to this

Now all your console functions should work without throwing errors.

I was having the same issue with the device information plugin using Phonegap 3.0.0. To solve this I simply had to uninstall and reinstall the plugin and then rebuild my project.

I went back to using the old <plugin> format. Although it is deprecated, it's the only way that works for me.

In my case...the solution was add this line of code for all plugin that i use.. in my config.xml

Came across this issue myself. Found the only solution was running cordova prepare after adding the plugins via CLI. prepare copies the necessary files across to the XCode project within the platforms folder.

I think this should be done as part of the build command, or the plugin add command if the project is present. Maybe it's a bug, maybe it's deliberate, but I couldn't find much documentation on it.

happened to me on phonegap 3.5 with Xcode 6

Probably not the best solution - because you lose your xcode settings - But it fixed the problem.

I also had this problem. I simply created the directory myself (platforms/ios/appname/Plugins/org.apache.cordova.console) and copied the missing files (CDVLLogger.h and CDVLLogger.m) to this directory. Then the compilation went through successfully.

I am using cordova version 3.5

I had the very same problem with the SQLitePlugin. I tried some of the proposed solutions in this post but none of them exactly worked for me. Then I tried to remove the platform/ios dir (I am developing for an iPhone), added the ios platform again (ionic add platform ios) and rebuilt the project. Suddenly, everything worked like a charm. I didn't had to create a new project nor had to remove the plugins.

We opened the project in Xcode, and looked in the Project navigator sidebar.

Under the virtual "Plugins" folder we noticed that the files for some plugins were missing from this folder. 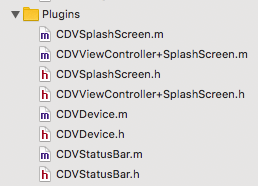 The solution was to right-click on Plugins and select Add Files to "ProjectName"...

Then we navigated into the plugin's folder and added all the .swift and .m and .h files there.

Doing this created new references in the file platforms/ios/[ProjectName].xcodeproj/project.pbxproj so we kept those changes.

Mass Saving of Plugins on an Existing Project

If you have a pre-existing project and you want to save all currently added plugins in the project, you can use:

Not the answer you're looking for? Browse other questions tagged ios xcode cordova or ask your own question.