I've been given this task by my wife, so it's top priority :-)

I have a collection of points (actually Northings & Eastings, but it doesn't really matter). I want to take those points and create a set of vectors that represent the outline, so I can plot on Google earth.

A possible solution I came up with, is to compute vectors between every point, and discard every vector that is overlapped by another vector. I haven't implemented this yet (not really sure how), but I wondered if there are other ways.

The algorithm only has to run a couple of times, so if it takes an hour per run and gigs of RAM it's not an issue.

It seems like what you're looking for a polygon such that

This defines a feasible set of candidate polygons with respect to your point set.

One objective function could be "Among these polygons, choose the one with the minimum number of vertices." That would be the convex hull of your point set. Other answers address that approach, so I won't say anything more about it.

But that is not the only objective function you could choose. For example, you could instead have a trade-off between having fewer vertices, having less total area, and having less-sharp angles at vertices. I don't know of any existing named algorithms for that problem, but it's definitely an interesting one.

One approach could be to start by finding the convex hull, then "pull in" edges to interior vertices in the locations where the cost of the extra vertex is outweighed by the benefit of having less total area. 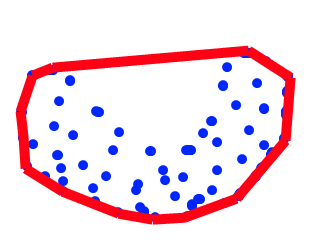 Would become this, by pulling in the edge along the top: 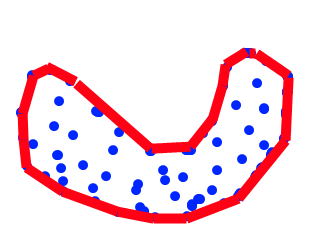 This second polygon might be a more "natural" fit for the point set, even though it is not the convex hull of the point set.

You're probably looking for the Convex Hull of the points; there are a variety of algorithms for finding that.

Not the answer you're looking for? Browse other questions tagged algorithm computational-geometry or ask your own question.

605
Algorithm to return all combinations of k elements from n
1534
What is the best algorithm for overriding GetHashCode?
483
What's the Hi/Lo algorithm?
1154
Ukkonen's suffix tree algorithm in plain English
1750
Image Processing: Algorithm Improvement for 'Coca-Cola Can' Recognition
961
How to find time complexity of an algorithm
2
Any good nearest-neighbors algorithm for similar images?
1971
What is the optimal algorithm for the game 2048?