Some commonly used android layouts such as RelativeLayout and LinearLayout (when weights are nonzero) have onMeasure() implementations that measure their children twice, resulting in exponential running time when nested. This is easily verifiable by emitting Log entries from a leaf View's onMeasure()... it gets called 2depth times.

Can someone give a clear and specific description as to why this is? Most importantly, is this exponential behavior due to an important part of the overall contract, or is it just an implementation detail that might be optimized away? If it is believed to be unavoidable, please give an example that requires it.

Such an example would greatly help me and others who are grumbling that the "keep your layouts shallow" mandate is burdensome and who are wondering whether this is being driven simply by not-yet-optimal algorithms in the core libraries, or whether there really is a fundamental difficulty blocking a fix.

Perhaps a minimal example would consist of a Button inside a LinearLayout inside another LinearLayout (with match_parent and weight=1 everywhere, to trigger the full exponential behavior), with some additional parameters or circumstances making it clear that all four of the calls to Button.onMeasure() are indeed meaningful and necessary.

My first guess would be that only two linear-time traversals are really needed-- the first traversal to gather everyone's preferred sizes, the second traversal to distribute slack and/or shrinkage. Other layout engines in the world, such as those for Tex and Swing and HTML, seem to be able to routinely handle very deep hierarchies having lots of alignment constraints and stretches, without any exponential blowup, and I imagine that's how they work.

Please note, I don't want answers explaining how the exponential blow-up occurs-- I understand that, and there have been several posts already where that has been asked and answered:

My question is whether the recursive double-measuring is fundamentally necessary/justified, and if so, I'd like a clear explanation/example showing why.

Edit 2013/8/22: I think maybe my question is still not getting across. I'll try to clarify and explain my motivation, more boldly this time.

Layout is not an exponentially hard problem, as evidenced by efficient layout engines in the world, such as those for Tex and Swing and HTML.

So, what happened with LinearLayout, and how should the android developer community proceed in response? I am asking not in the spirit of laying blame, but rather to understand and decide how to best move forward.

I can think of 4 possibilities:

(4) isn't a serious option for me personally. Furthermore it seems clear to me that changing the behavior of LinearLayout at this point is impractical, so I don't believe (2) is a serious option either.

That leaves (1) and (3). I'm capable and willing to do either of those personally, but which one? Obviously (1) is far preferable if it's possible-- so, is it possible? That seems to be the crucial blocking question that needs to be answered in order to determine how to move forward.

I have spent some time in the core code and the doc and it's not becoming clear, so that is why I'm asking the question here.

In terms of measuring children twice, it's my understanding that this is what happens with LinearLayouts particularly when weights are involved. The best explanation I've found for this comes from RomainGuy in one of his presentations.

He has a slide about this and briefly speaks to it at 17:45. Feel free to rewind to get a bit of context though. You can find the video I'm referencing here: Devoxx'10 - Dive Into Android

Basically what he says is that on the first pass they calculate the total width or height depending on orientation of the LinearLayout, add the weights of the children, and find out how much space is left over, then on the second pass with that information they are able to properly divvy out all the remaining space to all the children. Simple enough.

I'd also like to point out though that yes, while it's very true that shallow layout hierarchies have less of a performance hit, if you are adding just 1 or 2 extra layers, you probably aren't going to see a big performance impact for the user. Once it's laid out, it's done. Even in ListView's if you properly use the given "convertView", and set up ViewHolder's, you're going to get good performance.

I'd encourage you to use DDMS and do a layout dump of some of Google's apps. They are very complex, and often times surprisingly deep, but they still get good performance. Don't be stupid with your layouts, but if it saves you time, adding an extra layout isn't the end of the world.

A parent View may call measure() more than once on its children. For example, the parent may measure each child once with unspecified dimensions to find out how big they want to be, then call measure() on them again with actual numbers if the sum of all the children's unconstrained sizes is too big or too small (that is, if the children don't agree among themselves as to how much space they each get, the parent will intervene and set the rules on the second pass).

It seems they view the measurement pass as a dialog between parent and children. In other words they opted for maximum flexibility instead of optimization. It still seems like they could optimize the base layouts though.

I came here tonight to ask this. It's disappointing that nobody else even seems to understand your question. After thinking about it for a couple more hours, I think I might know the answer. 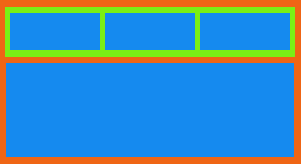 1) The red LinearLayout would measure the heights of green LinearLayout and the large blue widget on the bottom, then compare their weights, divide any leftover vertical space accordingly, and measure the children again. (The important thing to know here is that "measuring" a view actually sets its size.)

2) The green LinearLayout would then measure the widths of its three children, compare their weights, divide the horizontal space, and "measure" again.

Now, you would think that LinearLayout would be smart enough to optimize away many of its calculations. For example, there is no logical reason for the green layout to measure the width of its children when determining its own height. And if its children all have a height of fill_parent, then it shouldn't need to perform any calculations at all.

But the API doesn't allow LinearLayout to be that smart. The fundamental problem is that there is no way to measure only one dimension of a view. You can get them separately after they've been measured, but the actual measurement is done by View#onMeasure(int, int). The arguments to that method are encoded with View.MeasureSpec, and there's no way to encode "ignore this dimension." So the green LinearLayout stupidly calculates both dimensions of all its children when the red layout measures it, then repeats the entire process again when it does its own layout. The widths will not have changed the second time around, but they must still be recalculated because, again, there's no way to tell the layout or its children to measure only one dimension.

So to answer your question... no, it doesn't necessarily need to be this way, at least for many common use cases. This is a deficiency of the Android API.

If Google were to add new methods to View to measure dimensions separately, the default implementation would have to rely on onMeasure(int, int), which could be even worse for performance. But if there are any unused bits in the View.MeasureSpec encoding, then it might be possible to add an "ignore" flag that would allow future versions of LinearLayout to be better optimized.

The problem in my opinion is the measure cache. As far as I could see the cache only works if there was a layout of the view in the middle, so when you perform two consecutives measures of a child (even with the same exact measure specs) in the same "onMeasure" all the children and their sub-children are measured again. If the measure cache worked fine, the second measure should be much faster as it would take the cached values and it wouldn't cause all the children hierarchy to be measured again.

4240
How to close/hide the Android soft keyboard programmatically?
3108
How to stop EditText from gaining focus when an activity starts in Android?
788
Can I underline text in an Android layout?
285
Linear Layout and weight in Android
3008
Is there a unique Android device ID?
1438
What is the difference between gravity and layout_gravity in Android?
2199
What is 'Context' on Android?
1015
What's "tools:context" in Android layout files?
3935
Proper use cases for Android UserManager.isUserAGoat()?