Draw on screen border in Commodore 64

Ok. I hope it does not get closed because I have this curiosity since 25 years and I would love to understand the trick.

In the commodore 64 the border was not addressable by the 6569 VIC. All you could do was to draw pixels in the central area, the one where the cursor moved. The border was always uniform, although you could change its color with poke 53280,color if i remember correctly.

Nevertheless I clearly remember games intros where the border was featured with graphics, like it was fully addressable. I tried to understand how it worked but never got to the point. legends say it was a clever use of sprites, which could, under some circumstances, be drawn on the border, but I don't know if it's an urban legend.

edit: just read this from one of the provided links

Sprites were multiplexed across vertical raster lines (over 8 sprites, sometimes up to 120 sprites). Until the Group Crest released Krestage 3 in May 2007 there was the common perception that no more than 8 sprites could appear at one raster line, but assigning new Y coordinates made it reappear further down the screen.

This is evil.... you beat the raster and reposition the sprite before it gets there...

Firstly only sprites can be displayed in the border area or a repeating 8 bit pattern (8 pixels wide) which is read from the last byte of the video bank, usually $3fff. Note you can only see these sprites or 8 bit pattern when you trick the VIC chip into "not displaying" the borders. See below.

The borders have a higher priority than sprites, so normally when a sprite is drawn in a border area the border covers the sprite. With a bit of VIC chip trickery you can turn the borders off.

You can turn the top and bottom borders off quite easily (I'll explain below), and the side borders off with very critical timing.

Firstly a little bit of info on how the VIC chip works on a c64.

The VIC chip draws the screen from the top left to the top right, then down a line, and from left to right again until the entire screen is drawn. It performs this redraw 50 times a second (for PAL units) or 60 times a second for (NTSC units).

Another cool feature of the VIC chip was used to fix a problem when using hardware scrolling. Basic vertical scrolling was achieved by using a hardware register to move the screen 0-7 pixels vertically. Once you reached limit (0 or 7 depending on the direction of the scroll) you would move each character block (8x8 pixel) one block vertically and draw the new data to be displayed at the top (or bottom depending direction). This works very well, except that every 8 pixels of scrolling you would see data "pop" onto the screen. To remedy this, you could make the border area grow by 8 pixels vertically by clearing bit 3 in register $d011. This is called 24 row mode. By default the screen was set to 25 rows of 8x8 pixel characters. In 24 row mode, you could still draw characters to the bottom row, they would just be hidden by the border.

So the trick to turning off the top and bottom borders is to:

2) wait for the raster to reach a vertical position between $f2 and $fa (the 8 pixels between where the border starts in both 24 row mode and 25 row mode).

3) Set the screen to 24 row mode... moving the vertical start of the border above the current raster position

Step 3) tricks the VIC chip into thinking that it has already started drawing the border, so it never starts drawing it. Voila, the top and bottom borders are open.

Regarding side borders you can do the same thing with different registers, but as the horizontal movement of the raster is a lot quicker then the vertical movement the timing needs to be much tighter. And there is another issue to take into account called jitter. <-which I won't explain here. Search the web for "Stable Raster C64" for an in depth explaination of that issue.

Note that what Krestage 3 did (as mentioned in the question) is different.

One level of the trick is to mess with the border when the bottom of the "paper" (work-area rectangle, the thing inside the border) is just being drawn. This lets you have sprites in the upper and lower border.

A higher level is to mess with it at the right-hand edge of the paper, in every raster line, all as explained in JohnD's answer above. This lets you have sprites in the left and right border.

None of this lets you have more than 8 sprites in one line. That's just Krest magic.

By far the best resource (I know of) for the VIC chip is "The MOS 6567/6569 video controller (VIC-II) and its application in the Commodore 64" by Christian Bauer and a useful addendum is "The memory accesses of the MOS 6569 VIC-II and MOS 8566 VIC-IIe Video Interface Controller" by Marko Mäkelä.
Caveat lector: these are somewhat technical, and you might find them easier to understand after you've programmed some VIC effects yourself.

If the links ever die, just google up the articles by title, they're endlessly replicated.

You can open upper and lower borders with a simple BASIC program:

Im going to take a stab in the dark here (havent done this myself). I found this on wikipedia.

The c64demo section explains that:

Effects thought impossible were achieved in demos, mostly due to undocumented side-effects pertaining to the MOS Technology VIC-II chip. Some examples for VIC-trickery:

One of the mentioned hacks was:

Sprite scrollers were placed in the border. By tricking the hardware not to draw the border around the screen, sprites could be moved into this area and displayed.

Of course, the interesting part of the question is how its done. I would suggest looking in some demo database which includes source code in search for a demo that employs the hack.

From what I understand, this is only possible for sprites.

Sprites are allowed to be in the border area, and the border gets drawn overtop. Through some trickery, the border can be removed.

The Microsoft flight simulator drew on the border. For one, we can achieve border drawing effects by changing the border color at the right time. LOGO for example had a split screen mode for the Turtle graphics, where the screen was switched between HiRes graphics above and a few lines of text below. The frame was also differently colored. So it is easy to do a horizon effect, green pastures below and blue sky above (as in the Flight Simulator) which effect extends to the frame.

When you run the wild frame flicker program, like

then you get the color to change at every 10-20 pixels or so. That's the fastest change you can get, I think. So you can draw a horizontal line on the border. 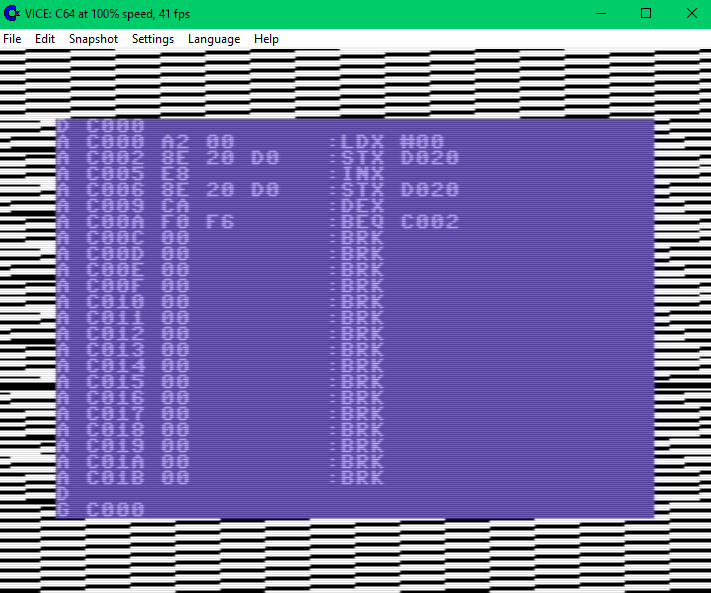 And you can time this by using the same vertical line register in the VIC at $D012 and the bit 7 of $D011, You can read the current scan line from that register. But if you write to it, and you enable the low bit in the register $D01A then the VIC will signal and IRQ when the scan hits that line. So that's how the split screen effect is accomplished.

Here is an example. First I set up my interrupt routine:

And here is my actual interrupt routine now:

With the following glorious result: 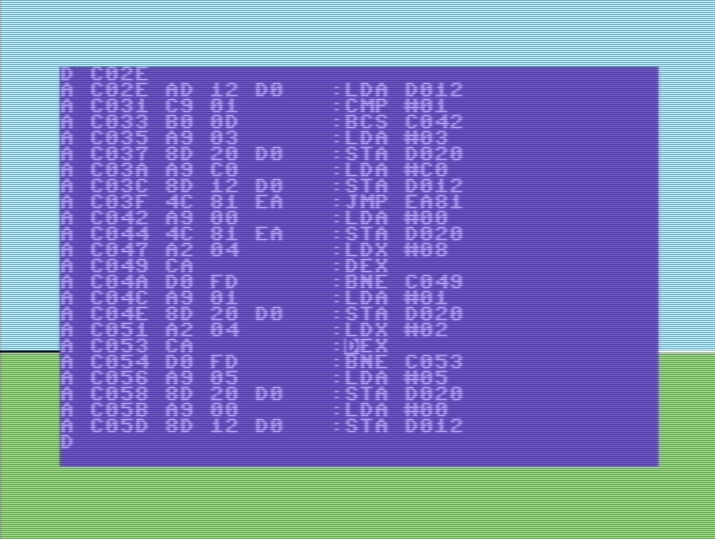 Graphics in border: Either sprites OR using the $3FFF effect (which is actually NOT sprites at all). To go into in detail needs much more space and time than I have available here.

You can also get sprites to border in basic: BASIC Sprites in Border

iirc, there was also some way to confuse the video chip so, that it draws 26th line of text.

Not the answer you're looking for? Browse other questions tagged retro-computing c64 commodore or ask your own question.