I have two character vectors of IDs.

I would like to compare the two character vectors, in particular I am interested in the following figures:

I would also love to draw a Venn diagram.

Here are some basics to try out:

Similarly, you could get counts simply as:

I'm usually dealing with large-ish sets, so I use a table instead of a Venn diagram:

Yet an another way, with using %in% and boolean vectors of common elements instead of intersect and setdiff. I take it you actually want to compare two vectors, not two lists - a list is an R class that may contain any type of element, while vectors always contain elements of just one type, hence easier comparison of what is truly equal. Here the elements are transformed to character strings, as that was the most inflexible element type that was present.

Like it was mentioned, there are multiple choices for plotting Venn-diagrams in R. Here is the output using gplots. 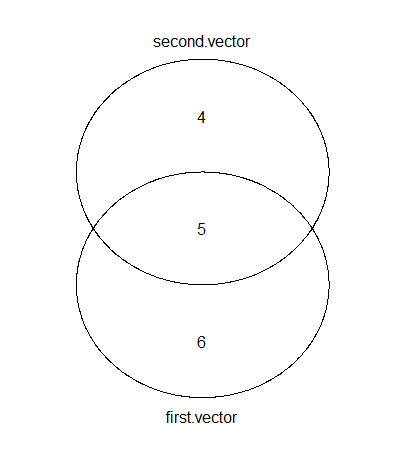 With sqldf: Slower but very suitable for data frames with mixed types:

Using the same example data as one of the answers above.

The match function returns a vector with the location in B of all values in A. So, cat, the second element in A, is the third element in B. There are no other matches.

To get the matching values in A and B, you can do:

To get the non-matching values in A and B:

Further, you can use length() to get the total number of matching and non-matching values.

If A is a data.table with field a of type list, with entries themselves as vectors of a primitive type, e.g. created as follows

and B is a list with vector of primitive entries, e.g. created as follows

if you just want the entry in a

if you want the matching indicies of a

if instead B is itself a data.table with the same structure as A, e.g.

and you're looking for the intersection of the two lists by one column, where you require the same order of vector elements.

Note that you can't do something as easy as

to join A&B because you cannot key on a field of type list in data.table 1.12.2

even if A and B are identical, as the == operator hasn't been implemented in R for type list

Not the answer you're looking for? Browse other questions tagged r venn-diagram or ask your own question.

0
R: find the number of common elements of two lists
0
compare dataframes and extract matching rows
28
Venn Diagrams with R?
3
comparing two variables in the same column in R
2
All vs all set intersection for list values

324
How to access the last value in a vector?
302
Concatenate a vector of strings/character
944
Drop data frame columns by name
57
Venn diagram proportional and color shading with semi-transparency
724
How can we make xkcd style graphs?
816
data.table vs dplyr: can one do something well the other can't or does poorly?
7
Get the list of items in Venn diagram
21
Venn Diagram with Item labels
0
Making a Venn diagram comparing column combinations between two data frames