Creating a shadow copy using the “Backup” context in a PowerShell

I am in the process of writing a PowerShell script for backing up a Windows computer using rsync. To this end, I am attempting to use WMI from said script to create a non-persistent Shadow copy with writer participation (as is apparently recommended for backups).

I found out from another question (Accessing Volume Shadow Copy (VSS) Snapshots from powershell) a way to create a shadow copy in general, but the example given there uses "ClientAccessible" as the context parameter, which results in the creation of a persistent Shadow Copy, without writer participation.

While searching for a solution, I have found that I could use the following command to obtain a list of contexts, which I assume are understood by WMI:

It does the list have a context named "Backup", which is conveniently what I want. I proceeded to attempt creating a non-persistent shadow copy using that context:

However, this seems to fail and the content of the $shadow variable is set to

According to the relevant documentation (Create method of the Win32_ShadowCopy class), the return value means "Unsupported shadow copy context."

I couldn't find any relevant documentation as to why this context is unsupported or whether it is possible to use it at all. I have also tried the "FileShareBackup" and "AppRollback" contexts without success.

I assume I am either missing something obvious, or that for some reason, WMI really doesn't support anything else than "clientAccessible" when creating shadow copies, or that this is OS-dependent (I am testing this on Windows 7, 64-bit)

How can I get this to work?

This one is tricky, because you have to use x64 version of Powershell (located under system32 not wow64)

The Shadow Copy Context are the .properties of the object.

Also I used the static method in my screenshots below.

so in the example there, you would want to use $class.Properties to see what you can use as a Shadow Context. 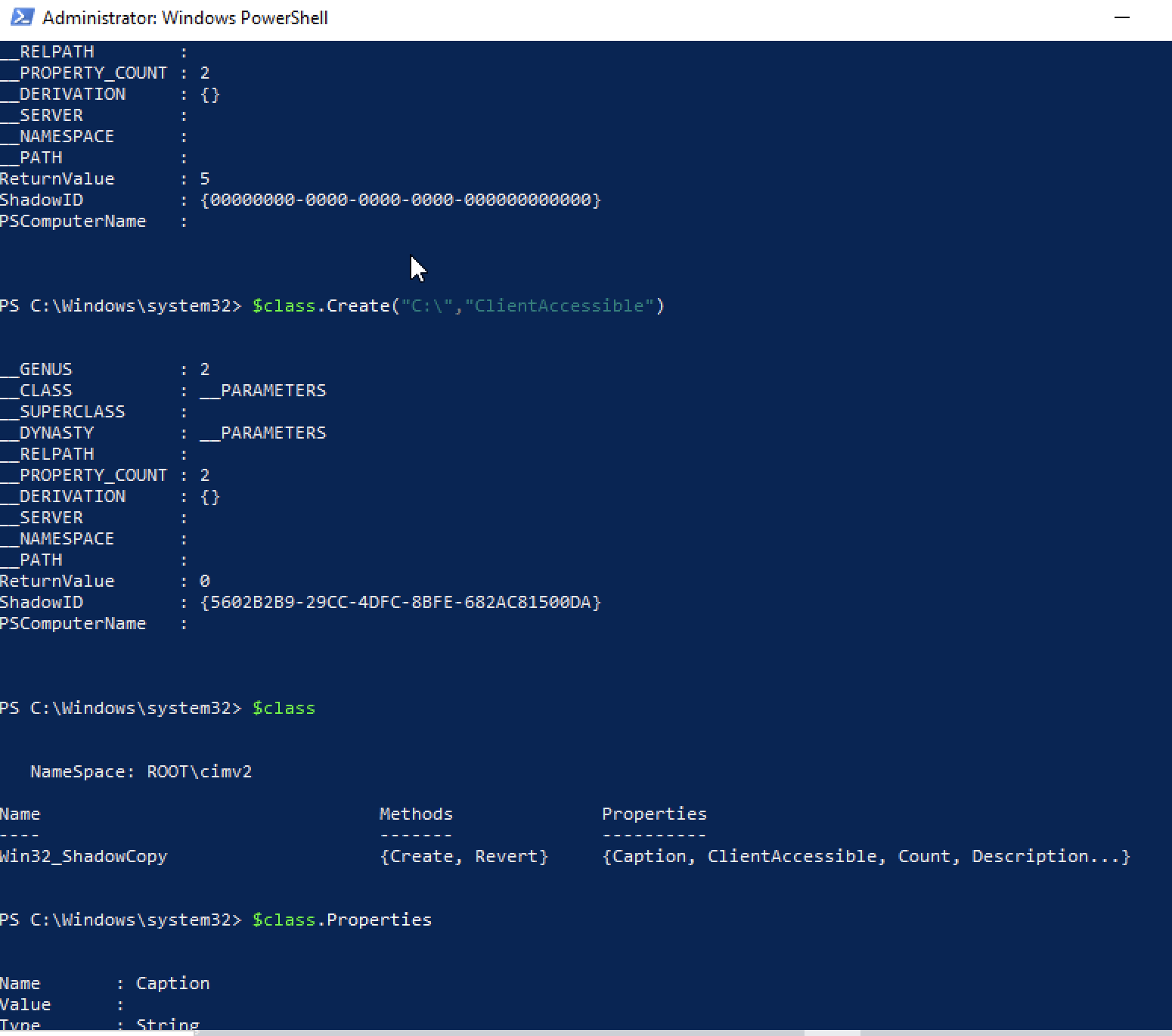 So Shadow Context is 'Caption, Count, Description' and anything else under the 'Name:' value of .Properties. I do not see 'Backup' as one of the options.

Your $shadow has a 5 on return value looking at the error message, your shadow id has all zeros , you would need to add a 1 or a 2 to the end of the volume shadow copy in the registry using binary or dword.

find the folder in the registry named volsnap in your regedit search .volsnap.sys is found in the C:\Windows\System32\drivers directory. The file size is 52,352 bytes.The volsnap file contains Microsoft's digital signature make sure its the correct bytes.

This confirms its authenticity. volsnap.sys appears to be a file that was compressed by an EXE-Packer. This technique is often used by trojans to keep the file size small and also hamper debugging efforts.

However, this in itself is not sufficient reason to presume malicious intent, since even well-intentioned, professional software producers take advantage of compressed files. For this reason, 2% of all experts consider this file to be a possible threat. The probability that it can cause harm is high. Please consider the additional Comments from other users.

not exactly as shown.you may have to try different wording I'm not sure if $will work, if not, try the js standalone version.

Not the answer you're looking for? Browse other questions tagged powershell backup wmi shadow-copy or ask your own question.