How do I edit an incorrect commit message in SourceTree without touching the command line?

Here are the steps to edit the commit message of a previous commit (which is not the most recent commit) using SourceTree for Windows version 1.5.2.0: 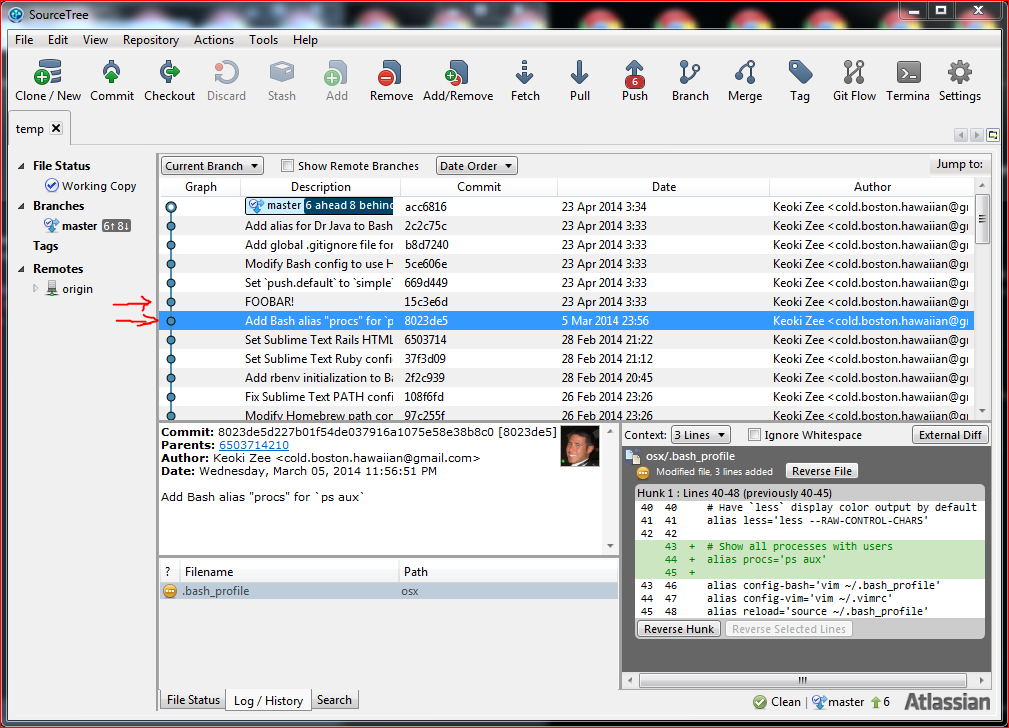 Right-click on the selected commit and click Rebase children...interactively: 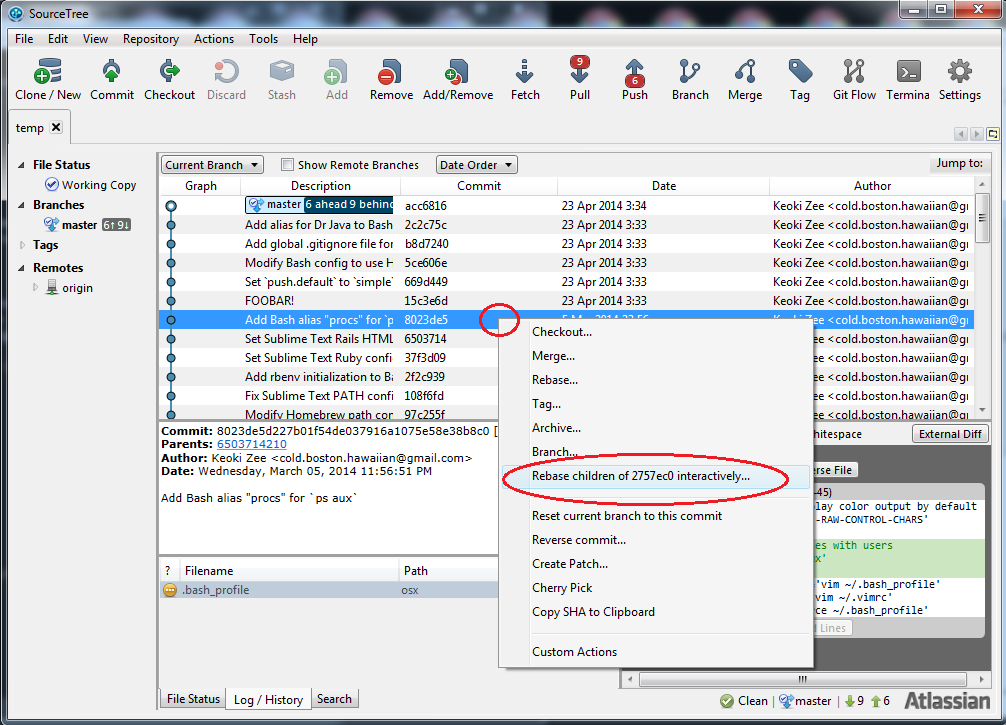 Select the commit that you want to edit, then click Edit Message at the bottom. In this case, I'm selecting the commit with the message "FOOBAR!": 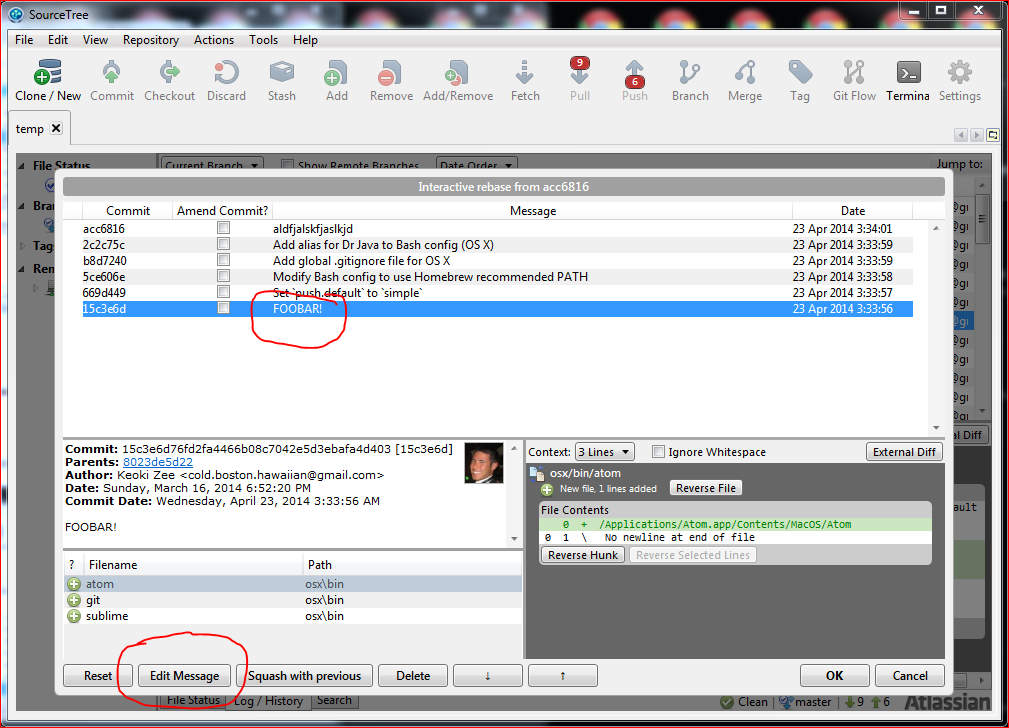 Edit the commit message, and then click OK. In my example, I've added "SHAZBOT! SKADOOSH!" 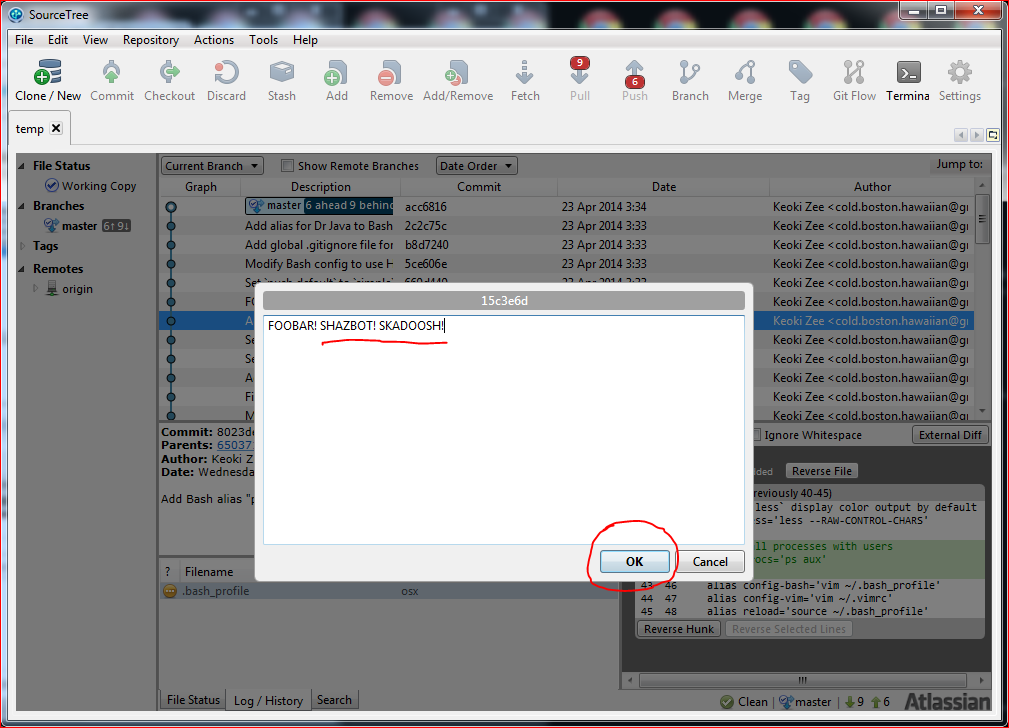 When you return to interactive rebase window, click on OK to finish the rebase: 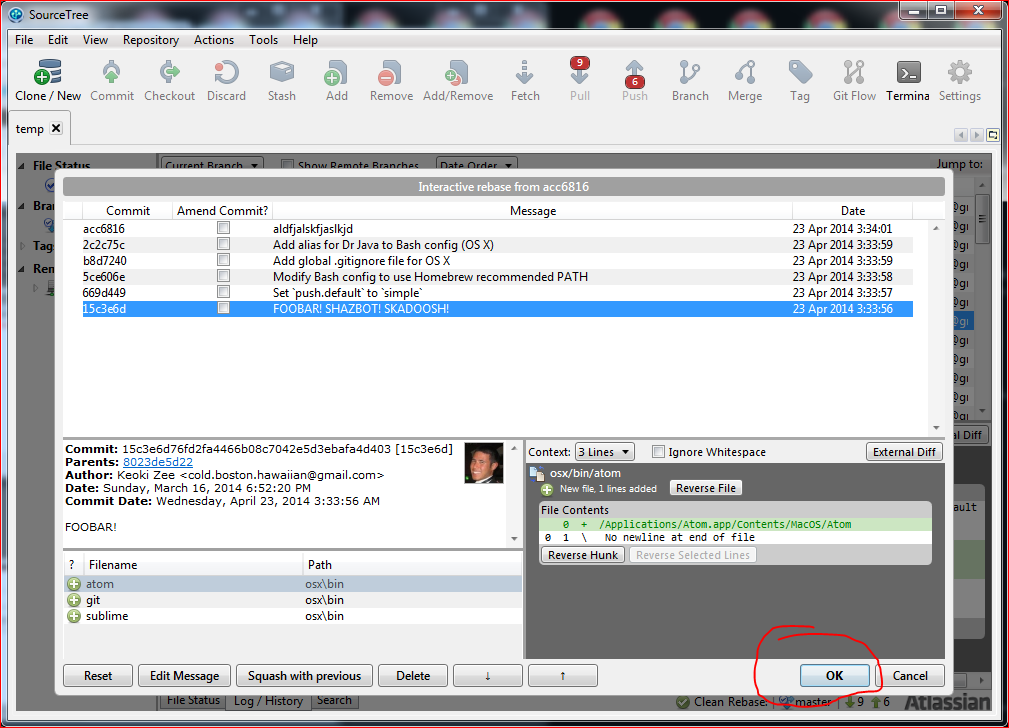 At this point, you'll need to force-push your new changes since you've rebased commits that you've already pushed. However, the current 1.5.2.0 version of SourceTree for Windows does not allow you to force-push through the GUI, so you'll need to use Git from the command line anyways in order to do that.

Click Terminal from the GUI to open up a terminal. 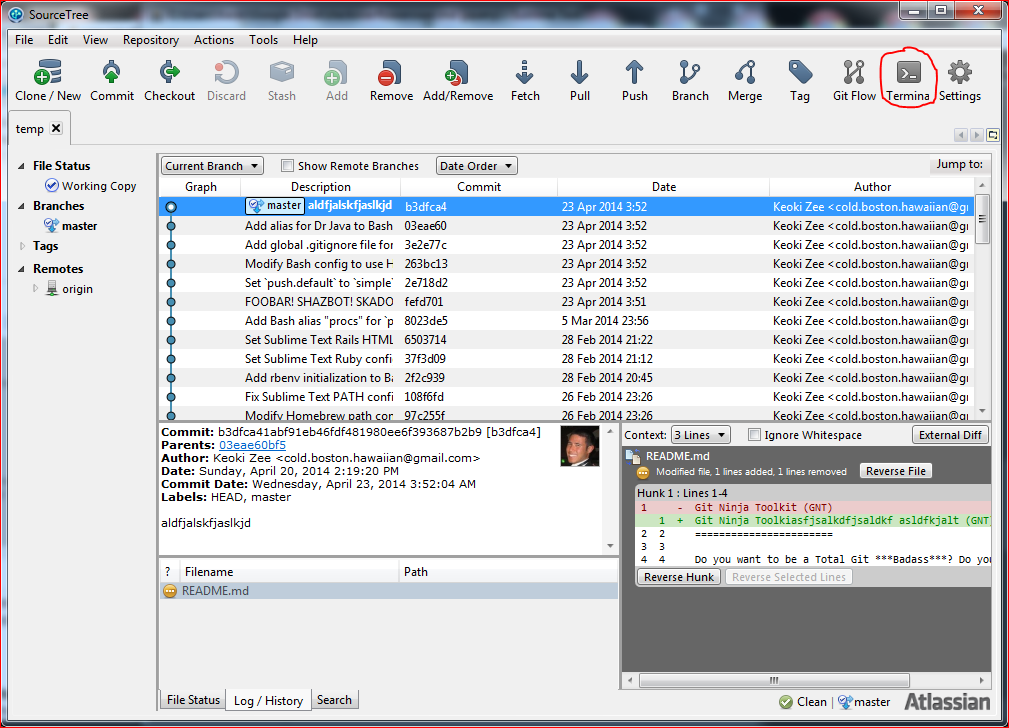 From the terminal force-push with the following command,

where <branch> is the name of the branch that you want to push, and -f means to force the push. The force push will overwrite your commits on your remote repo, but that's OK in your case since you said that you're not sharing your repo with other people.

Note: this answer was originally written with regard to older versions of SourceTree for Windows, and is now out-of-date.

See my new answer for the current version of SourceTree for Windows, 1.5.2.0. I'm leaving this answer behind for historical purposes.

as I'm on Windows I don't have a command line tool nor do I know how to use one :( Is it the only way to get that sorted out? The GUI doesn't cover all the git's functions? — Original Poster

Regarding Git GUIs, no, they don't cover all of Git's functions. They don't even come close. I suggest you check out one of the answers in How do I edit an incorrect commit message in Git?, Git is flexible enough that there are multiple solutions...from the command line.

SourceTree might actually come with the msysgit bash shell already, or it might be able to use the standard Windows command shell. Either way, you open it up form SourceTree by clicking the Terminal button:

You set which terminal SourceTree uses (bash or Windows) here: 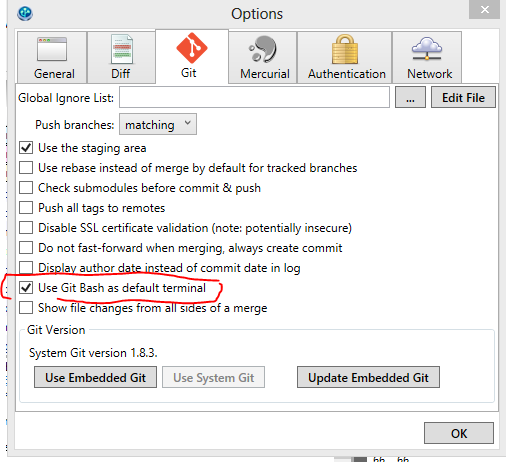 One way to solve the problem in SourceTree

That being said, here's one way you can do it in SourceTree. Since you mentioned in the comments that you don't mind "reverting back to the faulty commit" (by which I assume you actually mean resetting, which is a different operation in Git), then here are the steps:

if it's not possible because it's already pushed to Bitbucket, I would not mind creating a new repository and starting over.

Be aware, though, that because you did a hard reset to the faulty commit, then force pushing causes you to lose all work that come after it previously. If that's okay, then you might need to use the following command at the command line to do the force push, because I couldn't find an option to do it in SourceTree:

This also assumes that BitBucket will allow you to force push to a repo.

You should really learn how to use Git from the command line anyways though, it'll make you more proficient in Git. #ProTip, use msysgit and turn on Quick Edit mode on in the terminal properties, so that you can double click to highlight a line of text, right click to copy, and right click again to paste. It's pretty quick.

If the comment message includes non-English characters, using method provided by user456814, those characters will be replaced by question marks. (tested under sourcetree Ver2.5.5.0)

So I have to use the following method.

CAUTION: if the commit has been pulled by other members, changes below might cause chaos for them.

Step1: In the sourcetree main window, locate your repo tab, and click the "terminal" button to open the git command console.

[Situation A]: target commit is the latest one.

1) In the git command console, input

2) If the target commit has been pushed to remote, you have to push again by force. In the git command console, input

[Situation B]: target commit is not the latest one.

1) In the git command console, input

It is to squash the latest n commits. e.g. if you want to edit the message before the last one, n is 2. This command will open a vi window, the first word of each line is "pick", and you change the "pick" to "reword" for the line you want to edit. Then, input :wq to save&quit that vi window. Now, a new vi window will be open, in this window you input your new message. Also use :wq to save&quit.

2) If the target commit has been pushed to remote, you have to push again by force. In the git command console, input

Finally: In the sourcetree main window, Press F5 to refresh.

I just had to use your instructions while working with SourceTree, so thank you!

Was surprised because GitKraken does this with one step.

share|improve this answer
answered Feb 6 at 10:58

Not the answer you're looking for? Browse other questions tagged git atlassian-sourcetree or ask your own question.

7667
How to modify existing, unpushed commit messages?
100
How do I edit an incorrect commit message with TortoiseGit?
2
How to amend a specific commit message in Git?
2
Source tree commit attempt fails with cannot amend public changesets error
0
Is it possible to edit Github commits history?

7667
How to modify existing, unpushed commit messages?
4223
How do I push a new local branch to a remote Git repository and track it too?
802
How can I push a specific commit to a remote, and not previous commits?
2555
Message 'src refspec master does not match any' when pushing commits in Git
2141
How do you push a tag to a remote repository using Git?
1839
Is there a way to cache GitHub credentials for pushing commits?
667
Resetting remote to a certain commit
877
How to revert a merge commit that's already pushed to remote branch?
946
Changing git commit message after push (given that no one pulled from remote)