I want to encapsulate my form fields in a directive so I can simply do this:

How do I access the myForm in my directive so I can do validation checks, e.g. myForm.Email.$valid?

Then it will be available as the 4th argument to your link function:

You may only need access to the NgModelController though:

It contains a form with several inputs (name, email, age, and country). Name, email and age are directives. Country is a "regular" input.

For each input is displayed an help message when the user does not enter a correct value. 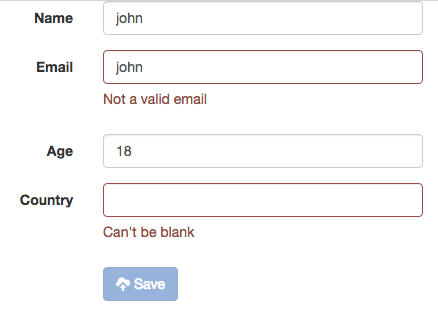 Edit 2: I'll leave my answer, as it might be helpful for other reasons, but the other answer from Mark Rajcok is what I originally wanted to do, but failed to get to work. Apparently the parent controller here would be form, not ngForm.

You can pass it in using an attribute on your directive, although that will get rather verbose.

Essential parts of the directive:

We've asked Angular to bind the scope value named in the form attribute to our isolated scope, by using an '='.

Doing it this way decouples the actual form from the input directive.

Note: I tried using require: "^ngForm", but the ngForm directive does not define a controller, and cannot be used in that manner (which is too bad).

All that being said, I think this is a very verbose and messy way to handle this. You might be better off adding a new directive to the form element, and use require to access that item. I'll see if I can put something together.

OK, here's the best I could figure out using a parent directive, I'll explain more in a second:

This stores the form in the parent directive scope (myForm), and allows child directives to access it by requiring the parent form (require: '^myForm'), and accessing the directive's controller in the linking function (myForm.getForm()).

I was trying to get it to work using an attribute on the form element. If this worked, you'd only have to add the directive to the same element as ngForm.

However, I was getting some weird behavior with the scope, where the myFormName variable would be visible within $scope, but would be undefined when I tried to access it. That one has me confused.

Starting with AngularJS 1.5.0, there is much cleaner solution for this (as opposed to using the link function directly). If you want to access a form's FormController in your subcomponent's directive controller, you can simply slap the require attribute on the directive, like so:

Next, you'll be able to access it in your template or directive controller like you would any other scope variable, e.g.:

Note that for this to work, you also need to have the bindToController: true attribute set on your directive. See the documentation for $compile and this question for more information.

Relevant parts from the documentation:

Require another directive and inject its controller as the fourth argument to the linking function. The require property can be a string, an array or an object:

Made your 'What I'd prefer' fiddle work! For some reason you could see the "$scope.ngForm" string in a console.log, but logging it directly didn't work, resulting in undefined. However, you can get it if you pass attributes to the controller function.

99
Dynamic validation and name in a form with AngularJS
23
Angularjs get form field validity inside directive
29
AngularJS: Fields added dynamically are not registered on FormController
15
Using 'require' in angular component
9
Is there any way to check the whole page is dirty or not?
0
Access angularj form object via ng-click without passing model name
0
Accessing parent formController in angular directive controller
0
getting the name of the form tag from an HTML element within a directive
0
dymanic value passing in templateUrl in angularjs
-2
Is it possible to put an entire form into ONE AngularJs directive?
See more linked questions