What is different between ER Diagram and Database Schema?

A database schema is usually a relational model/diagram. it shows the link between tables: primary keys and foreign keys.

In database diagram the relation between an apple and a apple tree would be: A foreign key "ID__TRE" which cannot be null in the table "APPLE" is linked to a primary key "ID_TRE" in the table "TREE". 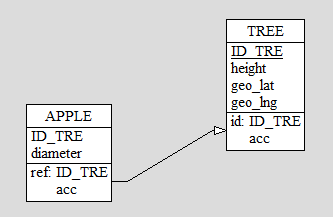 An entity relationship diagram. Shows links between the entities and the kind of relation between them. We are not talking about tables or keys there! Usually the entity relationship diagram follows Merise model. Database manager and developer as myself usually build an entity relationship model before conceiving the relational model/diagram.
The set of symbol in Merise are:(0-1, 0-n, 1-1, 1-n). The first number 0 or 1 describes whether the other part of the association is required for an object to exist. If it is zero, it means it can exists without being associated. If it is One it means that the object only exist in relation with an other object (e.g an apple need a tree to exist --> 1, a tree needn't apple to exists -->0) The second character tell us how many objects are accepted in the other part of the association. If it is 1, then only one object can exists in the relation, if it is n, a infinite number of object can be linked (e.g.: an apple can have one tree --> 1, a tree can have multiples apples --> n)

With Entity relationship the relationship will be described as : An apple has to belong to at least one tree to exists and can belong to only one tree(1-1). A tree needn't an apple to exist but it can have an infinite number of apples (0-n).

In fact both description mean the same but one is database oriented while the other is modelling oriented. Some modelling software such as DB-MAIN convert automatically an ER diagram to the relational diagram.

A database schema is a description of the actual construction of the database. It is an all-encompassing term that refers to the collective of tables, columns, triggers, relationships, key constraints, functions and procedures. It can refer to a document that describes all of this (such as an XML Schema) or as an abstraction of database makeup itself ("It would be difficult to change the schema of the database at this point"). It does not refer to rows inserted into the schema, or data itself. You would insert data into an existing schema.

An Entity Relationship Diagram is a visualization of the relationships between tables in a database. At the very least, it includes table names visualized as squares connected by lines that represent primary and foreign key constraints. It often includes the column names and symbols that include information about what kind of relationship exists between the columns (one-to-one, one-to-many, many-to-many).

DATA SCHEMAS bear some resemblance to ERDs, but they should NOT be considered either equivalent or interchangeable. If you make an ERD which can be used as a data schema... be open to the possibility you DIDN'T make an ERD ! ;-)

DATA schemas are diagrams used to describe to a DBA how data will be stored in a database (relational or non-relational).

BOTH diagrams serve quite DIFFERENT purposes: ERD: to make mere mortal end-users (and business owners) UNDERSTAND the model of a given business solution; and DATA SCHEMA: a "blueprint" used by DBAs to BUILD databases, and by DEVELOPERS to CONSUME the data in that database.

Not the answer you're looking for? Browse other questions tagged entity-relationship database or ask your own question.

4615
What is the difference between “INNER JOIN” and “OUTER JOIN”?
945
How do I quickly rename a MySQL database (change schema name)?
160
Difference between database and schema
228
Create a new database with MySQL Workbench
274
Difference Between Schema / Database in MySQL
679
Difference between scaling horizontally and vertically for databases
407
Authentication plugin 'caching_sha2_password' cannot be loaded