Database design for a survey [closed]

I need to create a survey where answers are stored in a database. I'm just wondering what would be the best way to implement this in the database, specifically the tables required. The survey contains different types of questions. For example: text fields for comments, multiple choice questions, and possibly questions that could contain more than one answer (i.e. check all that apply).

I'd appreciate any ideas and suggestions.

I think that your model #2 is fine, however you can take a look at the more complex model which stores questions and pre-made answers (offered answers) and allows them to be re-used in different surveys. 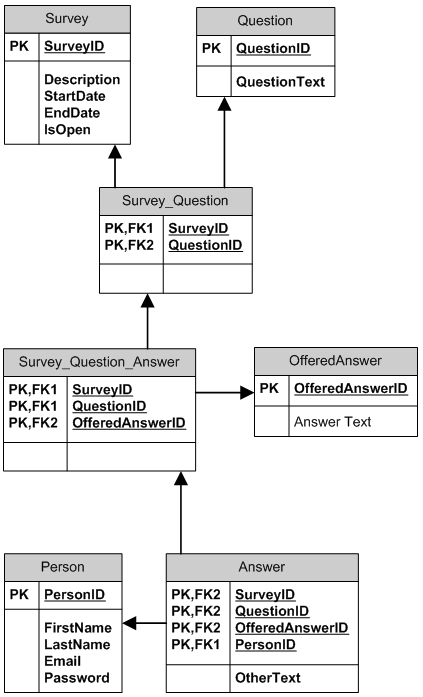 My design is shown below.

The script and the mysql workbench.mwb file are also available at
https://github.com/durrantm/survey 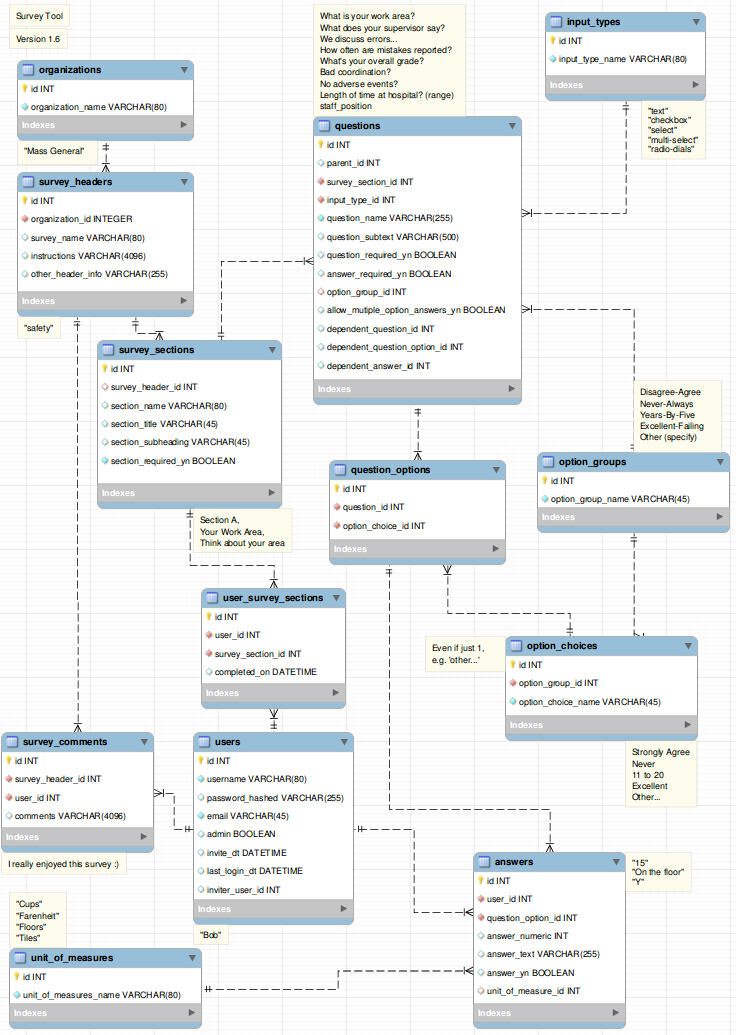 Definitely option #2, also I think you might have an oversight in the current schema, you might want another table:

Each question is going to probably have a set number of answers which the user can select from, then the actual responses are going to be tracked in another table.

Databases are designed to store a lot of data, and most scale very well. There is no real need to user a lesser normal form simply to save on space anymore.

As a general rule, modifying schema based on something that a user could change (such as adding a question to a survey) should be considered fairly smelly. There's cases where it can be appropriate, particularly when dealing with large amounts of data, but know what you're getting into before you dive in. Having just a "responses" table for each survey means that adding or removing questions is potentially very costly, and it's very difficult to do analytics in a question-agnostic way.

I think your second approach is best, but if you're certain you're going to have a lot of scale concerns, one thing that has worked for me in the past is a hybrid approach:

This is absolutely a lot more work to implement, so I really wouldn't advise this unless you know for certain that this table is going to run into massive scale concerns.

The second approach is best.

The simple things to do are:

We have had log tables in SQL Server Table with 10's of millions rows.

For a table with only 4 columns it shouldn't be a problem, even with a good few million rows. Of course this can depend on what database you are using. If its something like SQL Server then it would be no problem.

You'd probably want to create an index on the QuestionID field, on the tblAnswer table.

Of course, you need to specify what Database you are using as well as estimated volumes.

Looks pretty complete for a smiple survey. Don't forget to add a table for 'open values', where a customer can provide his opinion via a textbox. Link that table with a foreign key to your answer and place indexes on all your relational columns for performance.

Number 2 is correct. Use the correct design until and unless you detect a performance problem. Most RDBMS will not have a problem with a narrow but very long table.

Having a large Answer table, in and of itself, is not a problem. As long as the indexes and constraints are well defined you should be fine. Your second schema looks good to me.

Given the proper index your second solution is normalized and good for a traditional relational database system.

I don't know how huge is huge but it should hold without problem a couple million answers.

You may choose to store the whole form as a JSON string.

Not sure about your requirement, but this approach would work in some circumstances.

Not the answer you're looking for? Browse other questions tagged sql database-design or ask your own question.

225
Schema for a multilanguage database
216
How can you represent inheritance in a database?
0
Would DB performance be better to store all responses from the user in the same row or multiple rows
428
SQL query return data from multiple tables
3
Which layout is better for this database table?
1
Best way to maintain data integrity in a survey database
1
how to create a drop down menu for the answers of a survey app in php