I got some commits in my repository:

Where E is the most recent commit I made. Now I want to get rid of the changes I made with feature C but I want to keep the changes added with D and E.

I hope you can help me.

Interactive rebase is your friend!

As others have said:

When you get editor up as a result of issuing the above, take a look at the comment in the opened file:

The key bit for you is If you remove a line here THAT COMMIT WILL BE LOST.

So, delete the lines that reference the commits you want to be rid of, save and close, and git will handle the rest (you may have to fix some conflicts depending on the nature of the commit and the revert you're trying to delete).

It's important to note that if you have already pushed your code and others have pulled it, the above will not work as the commits will find their way back in there the next time someone who has your branch checked out does a push. The interactive rebase deletes the commits to the extent that there is no record of them, so the other clones do not know they have been deleted. Next time they push, they'll try and re-instate them as the local clones "see" that the origin does not have the objects (commits) that you have deleted.

If you only want to "get rid of the changes" (as specified in your question body) as opposed to actually "removing a commit" (as specified in the title), an easy option is adding a new commit, doing exactly the opposite of what the earlier commit did.

It's not foolproof and it can result in conflicts due to changes done since, but it doesn't alter history, allows you to document the reversal and its reasons, and plays well with other working copies.

git revert is the tool used to make such evil twins of a set of commits.

then move commit C to be the first at the bottom, you will have

you save and exit, then

this will undo commit C.

this is called rebasing: you want the -i switch.

If you only have changes locally, you're probably best off following a rebasing answer. If you've published the changes anywhere then you don't want to rebase because that will change history, meaning that everyone else will also have to rebase or you'll get your offending commit merged back in again.

If other people have your commits, the cleanest thing to do is to revert the offending change, not to excise it altogether. Use git revert COMMIT_ID to create a new commit that undoes the changes you applied in COMMIT_ID.

If you use TortoiseGit in Windows, you can right-click on the Git folder then click TortoiseGit > Show log. You can view all of the commits done before and then check the commit you'd want to revert to.

Click on the commit and you can see the changed files below. Click right on the files to be reverted and then click revert to parent revision. 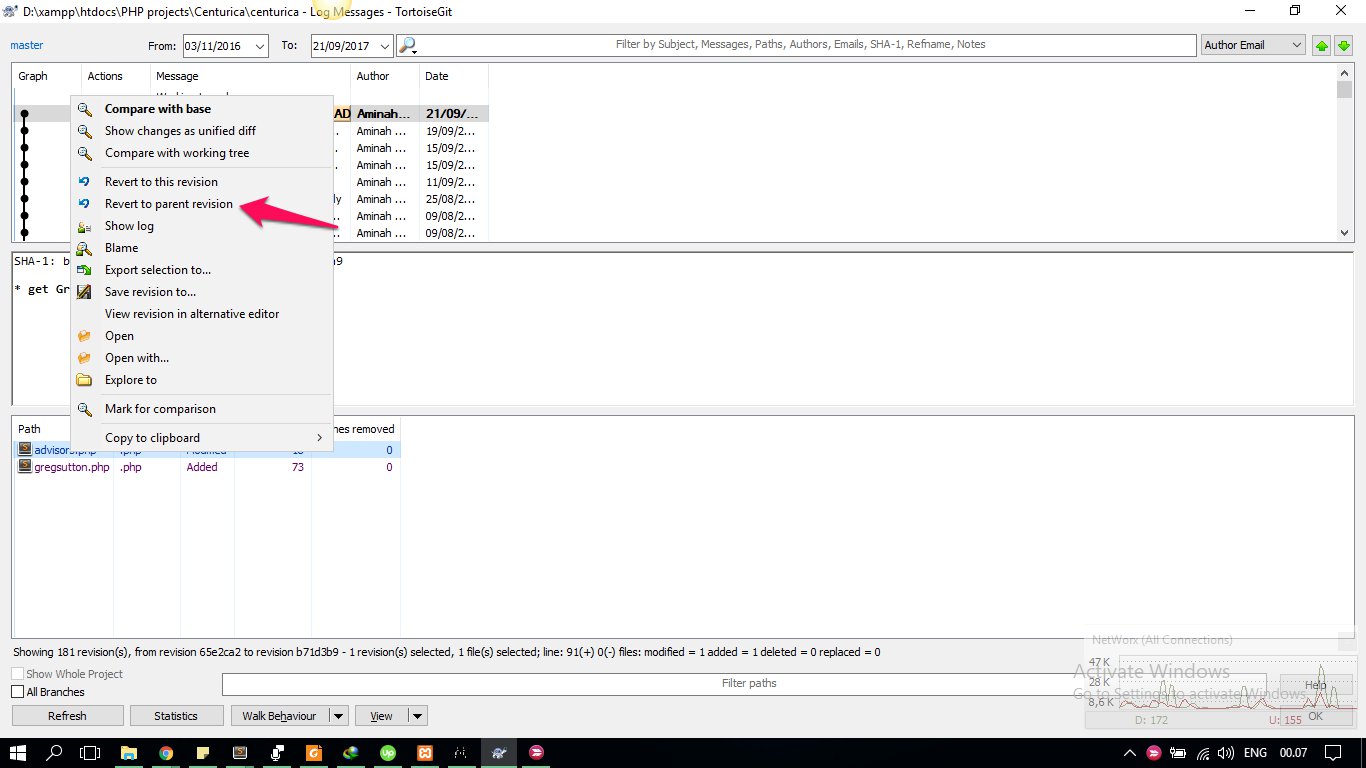 By far the best solution is to use git revert. This will make a new commit that undoes the changes in a specific SHA. This is a very safe way to remove a commit, and can be easily merge with other or remote branches.

you will have the list of your 3 last commit messages

exit rebase console, you will see that your commit is no more in the log and their files are staged.

0
Create a new project starting from a specific commit and preserving history
0
Avoid/removing git commit without loosing other commits changes
0
Use Git to store temporary development commit to delete later without showing in history
398
Remove specific commit
246
How to remove selected commit log entries from a Git repository while keeping their changes?
190
How to use Git Revert

5802
How do I discard unstaged changes in Git?
7720
How do I remove local (untracked) files from the current Git working tree?
10607
How do I undo 'git add' before commit?
24613
How do I undo the most recent local commits in Git?
3562
Remove a file from a Git repository without deleting it from the local filesystem
7318
How do I make Git forget about a file that was tracked, but is now in .gitignore?
6048
Move the most recent commit(s) to a new branch with Git
7618
How do I revert a Git repository to a previous commit?
4448
How do I update or sync a forked repository on GitHub?
1679
Can I delete a git commit but keep the changes?