What is the difference between a thread's context class loader and a normal class loader?

That is, if Thread.currentThread().getContextClassLoader() and getClass().getClassLoader() return different class loader objects, which one will be used?

Each class will use its own classloader to load other classes. So if ClassA.class references ClassB.class then ClassB needs to be on the classpath of the classloader of ClassA, or its parents.

The thread context classloader is the current classloader for the current thread. An object can be created from a class in ClassLoaderC and then passed to a thread owned by ClassLoaderD. In this case the object needs to use Thread.currentThread().getContextClassLoader() directly if it wants to load resources that are not available on its own classloader.

This does not answer the original question, but as the question is highly ranked and linked for any ContextClassLoader query, I think it is important to answer the related question of when the context class loader should be used. Short answer: never use the context class loader! But set it to getClass().getClassLoader() when you have to call a method that is missing a ClassLoader parameter.

When code from one class asks to load another class, the correct class loader to use is the same class loader as the caller class (i.e., getClass().getClassLoader()). This is the way things work 99.9% of the time because this is what the JVM does itself the first time you construct an instance of a new class, invoke a static method, or access a static field.

When you want to create a class using reflection (such as when deserializing or loading a configurable named class), the library that does the reflection should always ask the application which class loader to use, by receiving the ClassLoader as a parameter from the application. The application (which knows all the classes that need constructing) should pass it getClass().getClassLoader().

Any other way to obtain a class loader is incorrect. If a library uses hacks such as Thread.getContextClassLoader(), sun.misc.VM.latestUserDefinedLoader(), or sun.reflect.Reflection.getCallerClass() it is a bug caused by a deficiency in the API. Basically, Thread.getContextClassLoader() exists only because whoever designed the ObjectInputStream API forgot to accept the ClassLoader as a parameter, and this mistake has haunted the Java community to this day.

That said, many many JDK classes use one of a few hacks to guess some class loader to use. Some use the ContextClassLoader (which fails when you run different apps on a shared thread pool, or when you leave the ContextClassLoader null), some walk the stack (which fails when the direct caller of the class is itself a library), some use the system class loader (which is fine, as long as it is documented to only use classes in the CLASSPATH) or bootstrap class loader, and some use an unpredictable combination of the above techniques (which only makes things more confusing). This has resulted in much weeping and gnashing of teeth.

When using such an API, first, try to find an overload of the method that accepts the class loader as a parameter. If there is no sensible method, then try setting the ContextClassLoader before the API call (and resetting it afterwards):

There is an article on infoworld.com that explains the difference => Which ClassLoader should you use

Thread context classloaders provide a back door around the classloading delegation scheme.

Take JNDI for instance: its guts are implemented by bootstrap classes in rt.jar (starting with J2SE 1.3), but these core JNDI classes may load JNDI providers implemented by independent vendors and potentially deployed in the application's -classpath. This scenario calls for a parent classloader (the primordial one in this case) to load a class visible to one of its child classloaders (the system one, for example). Normal J2SE delegation does not work, and the workaround is to make the core JNDI classes use thread context loaders, thus effectively "tunneling" through the classloader hierarchy in the direction opposite to the proper delegation.

This confusion will probably stay with Java for some time. Take any J2SE API with dynamic resource loading of any kind and try to guess which loading strategy it uses. Here is a sampling:

Adding to @David Roussel answer, classes may be loaded by multiple class loaders.

From javin paul blog in javarevisited : 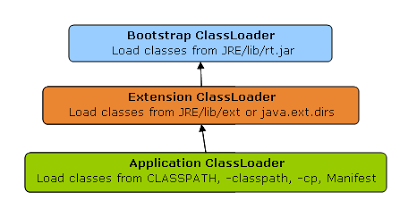 According to visibility principle, Child ClassLoader can see class loaded by Parent ClassLoader but vice-versa is not true.

Not the answer you're looking for? Browse other questions tagged java multithreading jvm classloader or ask your own question.

5
Use of Thread's ContextClassLoader
385
How to really read text file from classpath in Java
13
Difference between Thread.currentThread() classLoader and normal classLoader
6
@OrderBy causes java.lang.ClassCastException: antlr.CommonToken cannot be cast to antlr.Token
5
context class loader
6
Can't access resource in a JAR on all computers
4
Scope of Java class static member
7
what class loader is used?
2
NoClassDefFoundError on existing class
2
Read an xml file from a servlet
See more linked questions