Simplest way to do grouped barplot

I have the following dataframe:

I'm trying to make a grouped bar chart, species as height and then 2 colours for catergory.

here is my code:

Now what I want, is to not have to label the two bars twice and to group them apart, I've tried changing the space value to all sorts of things and it doesn't seem to move the bars apart. Can anyone tell me what I'm doing wrong? 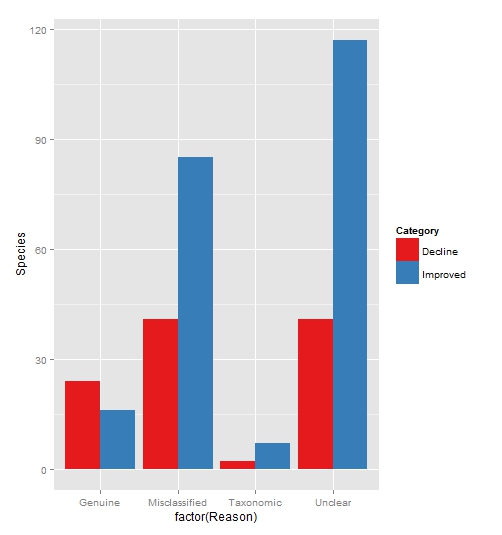 Not a barplot solution but using lattice and barchart: 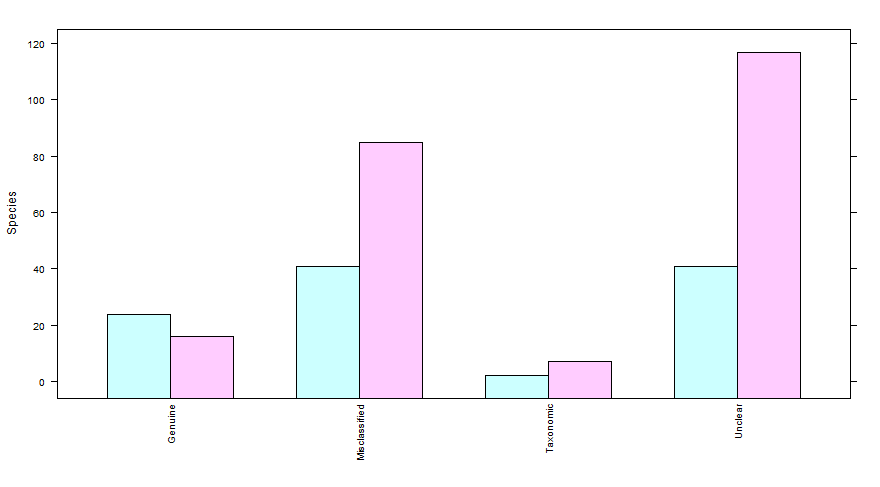 There are several ways to do plots in R; lattice is one of them, and always a reasonable solution, +1 to @agstudy. If you want to do this in base graphics, you could try the following: 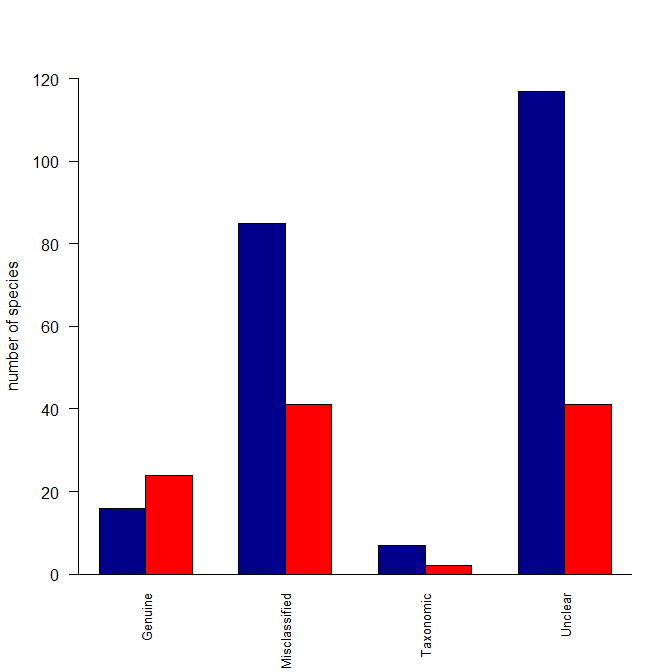 Here's what I did: I created a matrix with two columns (because your data were in columns) where the columns were the species counts for Decline and for Improved. Then I made those categories the column names. I also made the Reasons the row names. The barplot() function can operate over this matrix, but wants the data in rows rather than columns, so I fed it a transposed version of the matrix. Lastly, I deleted some of your arguments to your barplot() function call that were no longer needed. In other words, the problem was that your data weren't set up the way barplot() wants for your intended output.

I wrote a function wrapper called bar() for barplot() to do what you are trying to do here, since I need to do similar things frequently. The Github link to the function is here. After copying and pasting it into R, you do

The one convenience is that it will put a legend on the plot using the names of the levels in your categorical variable (e.g., "Decline" and "Improved"). If each of your levels has multiple observations, it can also plot the error bars (which does not apply here, hence errbar=FALSE 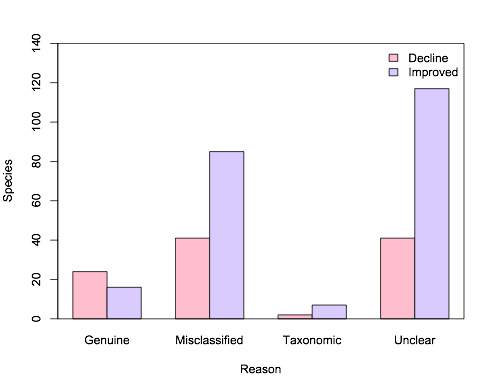 Not the answer you're looking for? Browse other questions tagged r bar-chart or ask your own question.

-1
Grouped bar chart in R with 4 bars for each group
0
Create Grouped Bar Chart with ggplot
0
Create a histogram for age distribution that has different colors for sex
2
grouped barplot: order x-axis & keep constant bar width, in case of missing levels
2
How to show number of occurrences on Y axis in ggplot2
0
Grouped bar plot in R
1
Grouped bar chart: ggplot
1
Error In Bar plot - incorrect number of names
0
How to plot the amount of basket sizes in each day?
0
How to draw a grouped barplot for two different columns?
See more linked questions