EDIT: Thanks for the link to the wiki, I think that since its already started there, its easier to go there to check it out. However the question here is also good, so people who are not around the msdn forums get to know about the wiki and where it is.

Do you have a Sample of Rx Code that could help people understand it better?

Now that the Rx framework has been released, I think that many of us are interested in getting the bits and trying them out. Sadly there really aren't many examples out there (after an exhaustive search I'm almost convinced Rx was meant only to do easy Drag on wpf apps).

I can't recall exactly where it was that I read or heard (I've been looking at many blogs and videos) that the Rx team seems to be interested in doing the 101 series...when they get enough time to do it... which pretty much sucks for those who want to understand it and play with it now (and I mean, what self-respected developer doesn't feel like a kid with a new toy when a new tech. like this comes up).

I've personally been giving a try now, but wow there are some crazy concepts in it... just to have methods names like Materialize and Zip makes me think of Teleporters and stuff from Back to the Future.

So, I think it would be nice if the ones with greater understanding, helped to build a collection of examples, ala 101 Linq Examples that goes from basic usage to more complex stuff, and pretty much cover all of the methods and their use, in a practical way (perhaps with a little bit of theory too, specially since these kind of concepts probably required it)

I think its great that MS devs take time to give us material like that, but I also think this community is good enough to start building our own material, dont you?

I actually had similar thoughts a couple days ago. We started our own "101 Rx Samples" as a post in the Rx MSDN forum, but we have since moved it to a Wiki format. Please feel free to come over and add your own samples!

To start with - Here is a simple drawing application, so that when the user drags, we draw a red line from the initial mouse down position to the current location, and also a blue spot at the current location. This is the result of my last week's hack on Rx 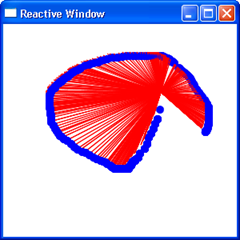 And here is the source code.

Another useful resource may be the Reactive Extensions (Rx) Koans: 55 progressive examples to help you learn Rx

I'm reading http://www.introtorx.com, which like the name suggests appears to be a concise introduction. There appear to be quite a lot of (very basic) examples, step-by-step, mostly using the console to print stuff out.

Here's my variation on the drag & drop sample by Wes Dyer, for Windows Forms (I'd make EnableDragging an extension method, probably):

A bit late, but if somebody new stumbles upon this question, http://rxmarbles.com/ provides a very nice way to visualise the operators.

And a Stock Viewer example on Github All StreamProviders, StreamAggregate, and Views run in their own threads. This is also a typical threading model of real-world stock viewing applications.

This example can also be a simple performance test skeleton for WPF DataGrid. It calculates ticks/second processed and displays it on the View.

Not the answer you're looking for? Browse other questions tagged c# .net system.reactive reactive-programming or ask your own question.

252
How do you configure an OpenFileDialog to select folders?
247
Globally catch exceptions in a WPF application?
452
What is the purpose of a question mark after a type (for example: int? myVariable)?
118
What is the difference between an interface and a class, and why I should use an interface when I can implement the methods directly in the class?
90
What's the status of current Functional Reactive Programming implementations?
5
RxJS is to events as promises are to async
391
Do zombies exist … in .NET?
1447
Why not inherit from List<T>?
2
Correct way of long running API calls in RX.net and WPF