How to test that no exception is thrown?

I know that one way to do it would be:

Is there any cleaner way of doing this? (Probably using Junit's @Rule?)

I have noticed this question garners interest from time to time so I'll expand a little.

When you're unit testing it's important to define to yourself what you consider a unit of work. Basically: an extraction of your codebase that may or may not include multiple methods or classes that represents a single piece of functionality.

Or, as defined in The art of Unit Testing, 2nd Edition by Roy Osherove, page 11:

A unit test is an automated piece of code that invokes the unit of work being tested, and then checks some assumptions about a single end result of that unit. A unit test is almost always written using a unit testing framework. It can be written easily and runs quickly. It's trustworthy, readable, and maintainable. It's consistent in its results as long as production code hasn't changed.

What is important to realize is that one unit of work usually isn't just one method but at the very basic level it is one method and after that it is encapsulated by other unit of works. 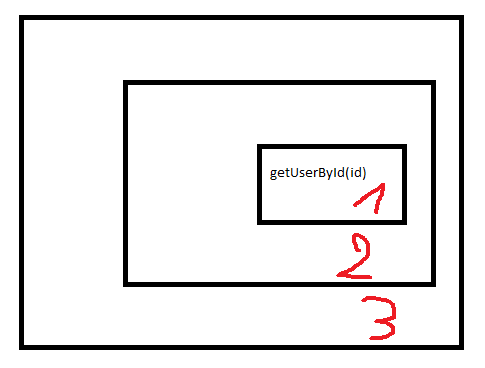 Ideally you should have a test method for each separate unit of work so you can always immediately view where things are going wrong. In this example there is a basic method called getUserById() which will return a user and there is a total of 3 unit of works.

The first unit of work should test whether or not a valid user is being returned in the case of valid and invalid input.
Any exceptions that are being thrown by the datasource have to be handled here: if no user is present there should be a test that demonstrates that an exception is thrown when the user can't be found. A sample of this could be the IllegalArgumentException which is caught with the @Test(expected = IllegalArgumentException.class) annotation.

Once you have handled all your usecases for this basic unit of work, you move up a level. Here you do exactly the same, but you only handle the exceptions that come from the level right below the current one. This keeps your testing code well structured and allows you to quickly run through the architecture to find where things go wrong, instead of having to hop all over the place.

At this point it should be clear how we're going to handle these exceptions. There are 2 types of input: valid input and faulty input (the input is valid in the strict sense, but it's not correct).

When you work with valid input you're setting the implicit expectancy that whatever test you write, will work.

Such a method call can look like this: existingUserById_ShouldReturn_UserObject. If this method fails (e.g.: an exception is thrown) then you know something went wrong and you can start digging.

By adding another test (nonExistingUserById_ShouldThrow_IllegalArgumentException) that uses the faulty input and expects an exception you can see whether your method does what it is supposed to do with wrong input.

You were trying to do two things in your test: check for valid and faulty input. By splitting this into two method that each do one thing, you will have much clearer tests and a much better overview of where things go wrong.

By keeping the layered unit of works in mind you can also reduce the amount of tests you need for a layer that is higher in the hierarchy because you don't have to account for every thing that might have gone wrong in the lower layers: the layers below the current one are a virtual guarantee that your dependencies work and if something goes wrong, it's in your current layer (assuming the lower layers don't throw any errors themselves).

I stumbled upon this because of SonarQube's rule "squid:S2699": "Add at least one assertion to this test case."

I had a simple test whose only goal was to go through without throwing exceptions.

What kind of assertion can be added to test this method? Sure, you can make a try-catch around it, but that is only code bloat.

The solution comes from JUnit itself.

In case no exception is thrown and you want to explicitly illustrate this behaviour, simply add expected as in the following example:

Test.None.class is the default for the expected value.

If you import org.junit.Test.None, you can then write:

Asserts that all supplied executables
do not throw exceptions.

Asserts that execution of the
supplied executable/supplier
does not throw any kind of exception.

Asserts that execution of the supplied executable
throws an exception of the expectedType
and returns the exception.

For JUnit versions before 5:

JUnit 5 introduced assertDoesNotThrow() assertion, so I'd prefer to use it instead of adding an additional dependency to your project. See this answer for details.

Java 8 makes this a lot easier, and Kotlin/Scala doubly so.

We can write a little utility class

and then your code becomes simply:

If you dont have access to Java-8, I would use a painfully old java facility: aribitrary code blocks and a simple comment

And finally, with kotlin, a language I've recently fallen in love with:

Though there is a lot of room to fiddle with exactly how you want to express this, I was always a fan of fluent assertions.

This is correct in principle but incorrect in conclusion.

Java allows exceptions for flow of control. This is done by the JRE runtime itself in APIs like Double.parseDouble via a NumberFormatException and Paths.get via a InvalidPathException.

Given you've written a component that validates Number strings for Double.ParseDouble, maybe using a Regex, maybe a hand-written parser, or perhaps something that embeds some other domain rules that restricts the range of a double to something specific, how best to test this component? I think an obvious test would be to assert that, when the resulting string is parsed, no exception is thrown. I would write that test using either the above assertDoesNotThrow or /*comment*/{code} block. Something like

I would also encourage you to parameterize this test on input using Theories or Parameterized so that you can more easily re-use this test for other inputs. Alternatively, if you want to go exotic, you could go for a test-generation tool (and this). TestNG has better support for parameterized tests.

What I find particularly disagreeable is the recommendation of using @Test(expectedException=IllegalArgumentException.class), this exception is dangerously broad. If your code changes such that the component under test's constructor has if(constructorArgument <= 0) throw IllegalArgumentException(), and your test was supplying 0 for that argument because it was convenient --and this is very common, because good generating test data is a surprisingly hard problem--, then your test will be green-bar even though it tests nothing. Such a test is worse than useless.

If you are unlucky enough to catch all errors in your code. You can stupidly do

Although this post is 6 years old now, however, a lot has changed in the Junit world. With Junit5, you can now use

JUnit5 adds the assertAll() method for this exact purpose.

To test a scenario with a void method like

to not throw an exception:

If you want to test that whether your test target consumes the exception. Just leave the test as (mock collaborator using jMock2):

If you want to test your exception consumption logic, things get more complex. I suggest delegating the consumption to a collaborator which could be mocked. Therefore the test could be:

But sometimes it's over-designed if you just want to log it. In this case, this article(http://java.dzone.com/articles/monitoring-declarative-transac, http://blog.novoj.net/2008/09/20/testing-aspect-pointcuts-is-there-an-easy-way/) may help if you insist tdd in this case.

This may not be the best way but it definitely makes sure that exception is not thrown from the code block that is being tested.

I faced the same situation, I needed to check that exception is thrown when it should, and only when it should. Ended up using the exception handler to my benefit with the following code:

You can expect that exception is not thrown by creating a rule.

You can do it by using a @Rule and then call method reportMissingExceptionWithMessage as shown below: This is Scala code.

Stumbled over this issue since I created some generic methods like

In https://newbedev.com/sonarqube-issue-add-at-least-one-assertion-to-this-test-case-for-unit-test-with-assertions some annotation stuff is proposed.

The solution is much more simple. It's enough to rename the "checkGeneric" method to "assertGeneric".

You can create any kind of your own assertions based on assertions from junit, because these are especially designed for creating user defined asserts intendet to work exactly like junit ones:

Now testing the so called scenario methodMustNotThrow and log all failures in a junit style:

Generally speaking there is possibility to instantly fail anything the test in any scenarios, in any place where it makes sense by calling fail(someMessage), which is designed exactly for this purpose. For instance use it in a try/catch block to fail if anything is thrown in the test case:

This is the sample of the method we test, supposing we have such a method that must not fail under specific circumstances, but it can fail:

The above method is a simple sample. But this works for complex situations, where the failure is not so obvious. There are the imports:

The following fails the test for all exceptions, checked or unchecked:

Not the answer you're looking for? Browse other questions tagged java unit-testing exception junit junit4 or ask your own question.

1
how to test I need try catch
0
How to verify in Mockito if the entity class setter is not called
21
How can I test if a particular exception is not thrown?
8
How to use PHPUnit to test a method that calls other methods of the same class, but returns no value
3
Integration test fails all unit tests succeed, whats the conclusion?
2
How to do unit tests correctly
1
Unit Testing valid inputs to a method
2
How to Assert No exception thrown TestNG java
0
Can we verify, no excpetion occured in a method from unit testing
-1
How to get the Exception from a test target method if it's been caught
See more linked questions