Simplest and understandable example of volatile keyword in Java

I'm reading about volatile keyword in Java and completely understand the theory part of it.

But, what I'm searching for is, a good case example, which shows what would happen if variable wasn't volatile and if it were.

Below code snippet doesn't work as expected (taken from here):

Volatile --> Guarantees visibility and NOT atomicity

Volatile is not a substitute for synchronization

Use volatile only when you are updating the reference and not performing some other operations on it.

will not be thread safe without use of synchronization or AtomicInteger as incrementing is an compound operation.

Why program does not run indefinitely?

Well that depends on various circumstances. In most cases JVM is smart enough to flush the contents.

Correct use of volatile discusses various possible uses of volatile. Using volatile correctly is tricky, I would say "When in doubt, Leave it out", use synchronized block instead.

synchronized block can be used in place of volatile but the inverse is not true.

For your particular example: if not declared volatile the server JVM could hoist the keepRunning variable out of the loop because it is not modified in the loop (turning it into an infinite loop), but the client JVM would not. That is why you see different results.

When a field is declared volatile, the compiler and runtime are put on notice that this variable is shared and that operations on it should not be reordered with other memory operations. Volatile variables are not cached in registers or in caches where they are hidden from other processors, so a read of a volatile variable always returns the most recent write by any thread.

The most common use for volatile variables is as a completion, interruption, or status flag:

Volatile variables can be used for other kinds of state information, but more care is required when attempting this. For example, the semantics of volatile are not strong enough to make the increment operation (count++) atomic, unless you can guarantee that the variable is written only from a single thread.

Locking can guarantee both visibility and atomicity; volatile variables can only guarantee visibility.

You can use volatile variables only when all the following criteria are met:

Debugging tip: be sure to always specify the -server JVM command line switch when invoking the JVM, even for development and testing. The server JVM performs more optimization than the client JVM, such as hoisting variables out of a loop that are not modified in the loop; code that might appear to work in the development environment (client JVM) can break in the deployment environment (server JVM).

This is an excerpt from "Java Concurrency in Practice", the best book you can find on this subject.

Consider this code, first without the volatile keyword:

Ideally, this program should print hello until the Return key is pressed. But on some machines it may happen that the variable running is cached and you cannot change its value from the shutdown() method which results in infinite printing of the hello text.

Thus, by using the volatile keyword, it is guaranteed that your variable will not be cached and the code will run fine on all machines.

Using the volatile keyword is a good and safer programming practice.

I have modified your example slightly. Now use the example with keepRunning as volatile and non volatile member :

Variable Volatile: Volatile Keyword is applicable to variables. volatile keyword in Java guarantees that value of the volatile variable will always be read from main memory and not from Thread's local cache.

Volatile Field: An indication to the VM that multiple threads may try to access/update the field's value at the same time. To a special kind of instance variables which has to shared among all the threads with Modified value. Similar to Static(Class) variable, Only one copy of volatile value is cached in main memory, So that before doing any ALU Operations each thread has to read the updated value from Main memory after ALU operation it has to write to main memory direclty. (A write to a volatile variable v synchronizes-with all subsequent reads of v by any thread) This means that changes to a volatile variable are always visible to other threads. 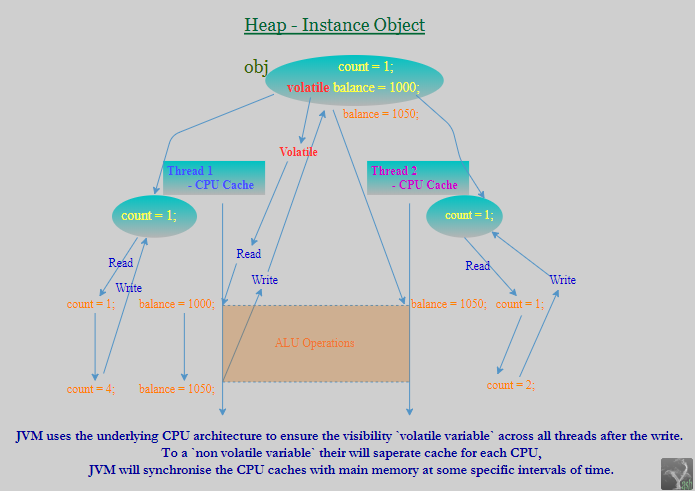 Here to a nonvoltaile variable if Thread t1 changes the value in t1's cache, Thread t2 can't access the changed value untill t1 writes, t2 read from main memory for the most recent modified value, which may lead to Data-Inconsistancy.

Shared Variables: Memory that can be shared between threads is called shared memory or heap memory. All instance fields, static fields, and array elements are stored in heap memory.

Synchronization: synchronized is applicable to methods, blocks. allows to execute only 1-thread at a time on object. If t1 takes control, then remaining threads has to wait untill it release the control.

If you are running in a single-processor or if your system is very busy, the OS may be swapping out the threads which causes some levels of cache invalidation. Not having a volatile doesn't mean that memory will not be shared, but the JVM is trying to not synchronize memory if it can for performance reasons so the memory may not be updated.

Another thing to note is that System.out.println(...) is synchronized because the underlying PrintStream does synchronization to stop overlapping output. So you are getting memory synchronization "for free" in the main-thread. This still doesn't explain why the reading loop sees the updates at all however.

Whether the println(...) lines are in or out, your program spins for me under Java6 on a MacBook Pro with an Intel i7.

Can anyone explain volatile with example ? Not with theory from JLS.

I think your example is good. Not sure why it isn't working with all System.out.println(...) statements removed. It works for me.

Is volatile substitute for synchronization ? Does it achieve atomicity ?

In terms of atomicity, however, the answer is "it depends". If you are reading or writing a value from a field then volatile provides proper atomicity. However, incrementing a volatile field suffers from the limitation that ++ is actually 3 operations: read, increment, write. In that case or more complex mutex cases, a full synchronized block may be necessary. AtomicInteger solves the ++ issue with a complicated test-and-set spin-loop.

When a variable is volatile, it is guaranteeing that it will not be cached and that different threads will see the updated value. However, not marking it volatile does not guarantee the opposite. volatile was one of those things that was broken in the JVM for a long time and still not always well understood.

volatile is not going to necessarily create giant changes, depending on the JVM and compiler. However, for many (edge) cases, it can be the difference between optimization causing a variable's changes to fail to be noticed as opposed to them being correctly written.

Basically, an optimizer may choose to put non-volatile variables on registers or on the stack. If another thread changes them in the heap or the classes' primitives, the other thread will keep looking for it on the stack, and it'll be stale.

volatile ensures such optimizations don't happen and all reads and writes are directly to the heap or another place where all threads will see it.

Lot's of great examples, but I just want to add that there are a number of scenarios where volatile is required so there is no one concrete example to rule them a.

Check it out for more Java volatile examples.

Please find the solution below,

The value of this variable will never be cached thread-locally: all reads and writes will go straight to "main memory". The volatile force the thread to update the original variable for each time.

Please refer this link http://java.dzone.com/articles/java-volatile-keyword-0 to get more clarity in it.

The volatile keyword tells the JVM that it may be modified by another thread. Each thread has its own stack, and so its own copy of variables it can access. When a thread is created, it copies the value of all accessible variables in its own memory.

try out this example with and without volatile.

Objects that are declared as volatile are usually used to communicate state information among threads,To ensure CPU caches are updated, that is, kept in sync, in the presence of volatile fields, a CPU instruction, a memory barrier, often called a membar or fence, is emitted to update CPU caches with a change in a volatile field’s value.

The volatile modifier tells the compiler that the variable modified by volatile can be changed unexpectedly by other parts of your program.

The volatile variable must be used in Thread Context only. see the example here

Not the answer you're looking for? Browse other questions tagged java multithreading concurrency volatile or ask your own question.

4181
What are the differences between a HashMap and a Hashtable in Java?
417
What is object serialization?
285
Volatile vs Static in Java
343
Java heap terminology: young, old and permanent generations?
15
The code example which can prove "volatile" declare should be used
6
Java threading/volatile
6
Complete example for use of volatile key word in Java?
2
Merging two sorted linked list of unequal length
2
The behaviour of making a non-volatile reference to a volatile object in Java
2
Why Volatile variable isn't used for Atomicity
See more linked questions

4181
What are the differences between a HashMap and a Hashtable in Java?
1999
Java inner class and static nested class
766
What is the volatile keyword useful for?
3526
What is the difference between public, protected, package-private and private in Java?
2283
What's the simplest way to print a Java array?
2411
How do I declare and initialize an array in Java?
285
Volatile vs Static in Java
290
Difference between volatile and synchronized in Java