I have been scouring the internet for days, I have a problem similar to this.

I need to retrieve the console output in raw (plain) text. But if I can get it in HTML that is fine too, I can always parse it. The only thing is that I need to get it during the build step, which is a problem since the location where it should be available is truncated...

I have tried retrieving the console output from the following URL's (relative to the job):

The two text ones are plain text and would be perfect if not for the truncation, same goes for the HTML one... exactly what I need - only its truncated....

I am sure it is possible to retrieve this information somehow, since when viewing /consoleFull there is a real-time update of the console, without truncating or buffering.

However, upon examining that web page, instead of finding the content I desired, I found this code where it should have been (I did not include the full pages code, since it would be mostly irrelevant, and I believe those answering would be able to find out and know what should be there on their own)

Specifically, I am hoping there is a way for me to get the content from text whatever it may be. I am not familiar with this language and so am not sure how I might be able to get the content I want. Plugins won't help since I want to retrieve this content as part of my script during the build step

You did pretty much good investigation already. I can only add the following: all console related plug-ins I know are designed as a post build actions.

The Log Trigger plugin provides a post-build action that allows Hudson builds to search their console log for a given regular expression and if found, trigger additional downstream jobs.

So it looks like there is no straightforward solution to your problem. I can see the following options:

1. Use tee or something similar (applicable to shell build steps only)

This solution is far from being universal, but it can provide quick access to the latest console output, produced by a command or set of command.

Using synonyms on the system level other Jenkins build steps can modified in order to produce console output. File with console output can be referenced through Jenkins or using any other way.

You can just do a quick fix for internal usage or provide a patch introducing specific system-wide setting.

Code in your example is used to request updates from the Jenkins server. As you may expect the server side can return piece of information starting with some offset. Let me show. 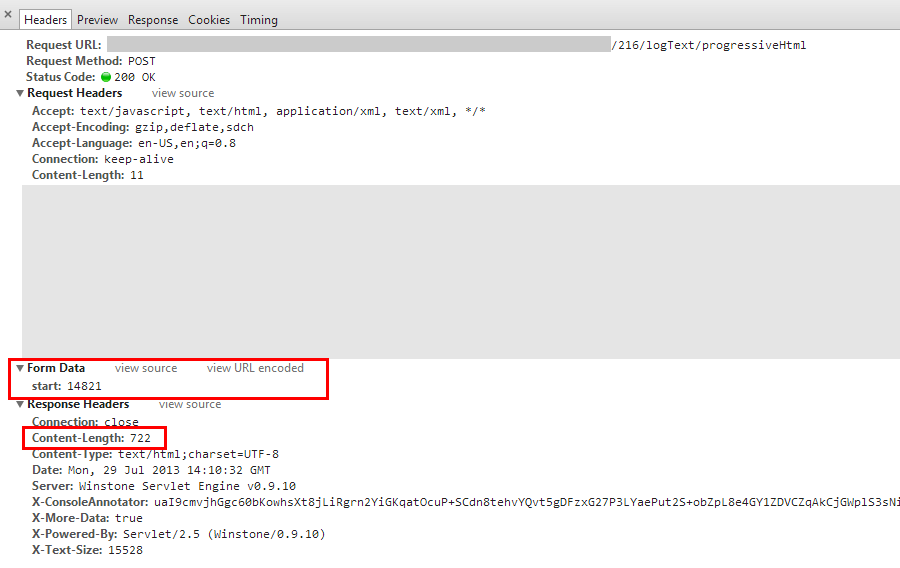 Response is a chunk of information to be added:

So the answer is: use url/job-name/build-number/logText/progressiveHtml, specify start offset, send request and receive console update.

I had a similar issue, the last part of my Jenkinsfile build script needs to parse the ConsoleLog for particular error messages to put in an email build report.

First attempt: http request.
It felt like a hack, it mostly worked, but ran into issues when we locked down access to the Jenkins server & my build nodes could no longer perform annon http gets on the page

Second attempt: use the APIs to enumerate the log lines.
It felt like the right thing to do, but it failed horribly as my nodes would take 30 minutes to get through the 100 meg log files. My presumption is that the Jenkins server was not caching the file, so each request involved a re-reading of the entire file up until the point of the last read.

Third and most successful solution: run grep on the server.

it was fast, reliable, and it didn't matter how big the log files were.

Yes, this required trust of the Jenkins admin and knowledge of the directory paths on the Jenkins server - but since I was the admin, I trusted myself to do the right thing. Your mileage may vary.

To add some insight: when the Jenkins build was in progress, the response for the .../consoleText URL maxed out at 10000 lines, exactly. I was using 'requests()' package in Python. I have tried the same URL with curl and again received only the first 10K lines. Only after the build has finished both methods returned the full log (>22K lines in my case).

I will research further and hope to report back.

Not the answer you're looking for? Browse other questions tagged jenkins continuous-integration hudson jenkins-plugins or ask your own question.

88
How do I clear my Jenkins/Hudson build history?
3
Joined console output for “Build other projects” in hudson/jenkins
67
Jenkins/Hudson - accessing the current build number?
172
Skip a submodule during a Maven build
45
Jenkins console output not in realtime
47
Timeout on a Build Step of Jenkins
1
Jenkins sourcing a config file during build shell step
2
Jenkins EnvInject build step
161
Changing Jenkins build number