Crashlytics is not sending Crash report from iPhone

I've setup the Crashlytics in my one iOS application and installed the application on a real device. My Crashlytics Dashboard is displaying that, I've successfully added the app. However, it's not sending crash report. My internet speed is not so good. But I can check my emails from this device. Can anybody guess, where is the problem?

Xcode debugger does NOT allow Crashlytics to process crash reports. Yeah, that seem weird even to me when I read that first time but it is a fact (Source). That's is the reason we never see crash report When:
- running app in Simulator
- running app on iDevice by directly build and run from Xcode with debugger on.

To make sure a crash is reported during your testing (copied from Crashlytics support site):
1. Launch simulator
2. Press stop
3. Launch your app and force a crash
4. Relaunch the app from simulator
5. See the crash report in the web dashboard.

Added a reference; Crashlytics also provides a short article on a quick way to force a crash.

Make some changes in project build settings like in below image

The primary reason any crash reporter won't work on iOS is due to interference from different crash reporters. However, with Crashlytics specifically there could be something specific to them causing the crash report not getting reported.

Xcode debugger does NOT allow Any Crash Reporter to process crash reports. This is because XCode overrides any hooks into the crash handling call backs. This only happens when:

To make sure a crash is reported during your testing (http://support.crashlytics.com/knowledgebase/articles/92523-why-can-t-i-have-xcode-connected-):

While a super old video it's still relevant, here's a video of the steps above (example from Crittercism): https://www.youtube.com/watch?v=sU6Su3PBFH4

For me, the problem was that the device was connected to my Mac :) From this source:

Also, if you have your device connected to your Mac, XCode's debugger will step in as well. So just disconnect the device before testing :)

We recently ran into this issue and I found that somewhere along the way the build script was removed. Adding it back in with the following fixed the issue for us:
./Crashlytics.framework/run <your_api_key> <build_secret>

Note : When using Cocoapods you will want to us the following instead of the above (source): ./Pods/CrashlyticsFramework/Crashlytics.framework/run

The above quote comes from Crashlytics's visual tutorial, referenced in this post.

From the RayWenderlich site:

You won’t get any crash reports if Xcode intercepts the crash event! To make all the examples below work, you have to build and run the application, then click the stop button on Xcode. This way you will have the latest version installed on the the device. Once that is done, you can launch the app on the device itself, and then crash it all you want! All the crashes on your iOS device will be caught and sent to the server component of the service that you have integrated into the app. Crash reports are usually sent to the server the next time you start the app, so the steps to follow to generate a crash report on the server are as follows: Build and run on Xcode. Press the stop button. Run the app on your iOS device. Make the app crash. Run the app again.

Crashlytics works for me until now. I don't know why but now it doesn't work.

You should turn debug-mode on by

My problem is here Crashlytics error code: 202 when Submitting files :(

Make sure you are not forcing the crash too early.

on the Xcode console logs.

Then force the crash and restart the app, and the crash will be reported now.

I ran into a similar problem when trying the test crash code.

I was running my app from a device, without Xcode, and the crash wouldn't show up on Crashlytics Dashboard. What worked for me was the following tip from Crashlytics website:

I commented out the above crash() call, and re-ran the app. Then the crash showed up in the Dashboard. 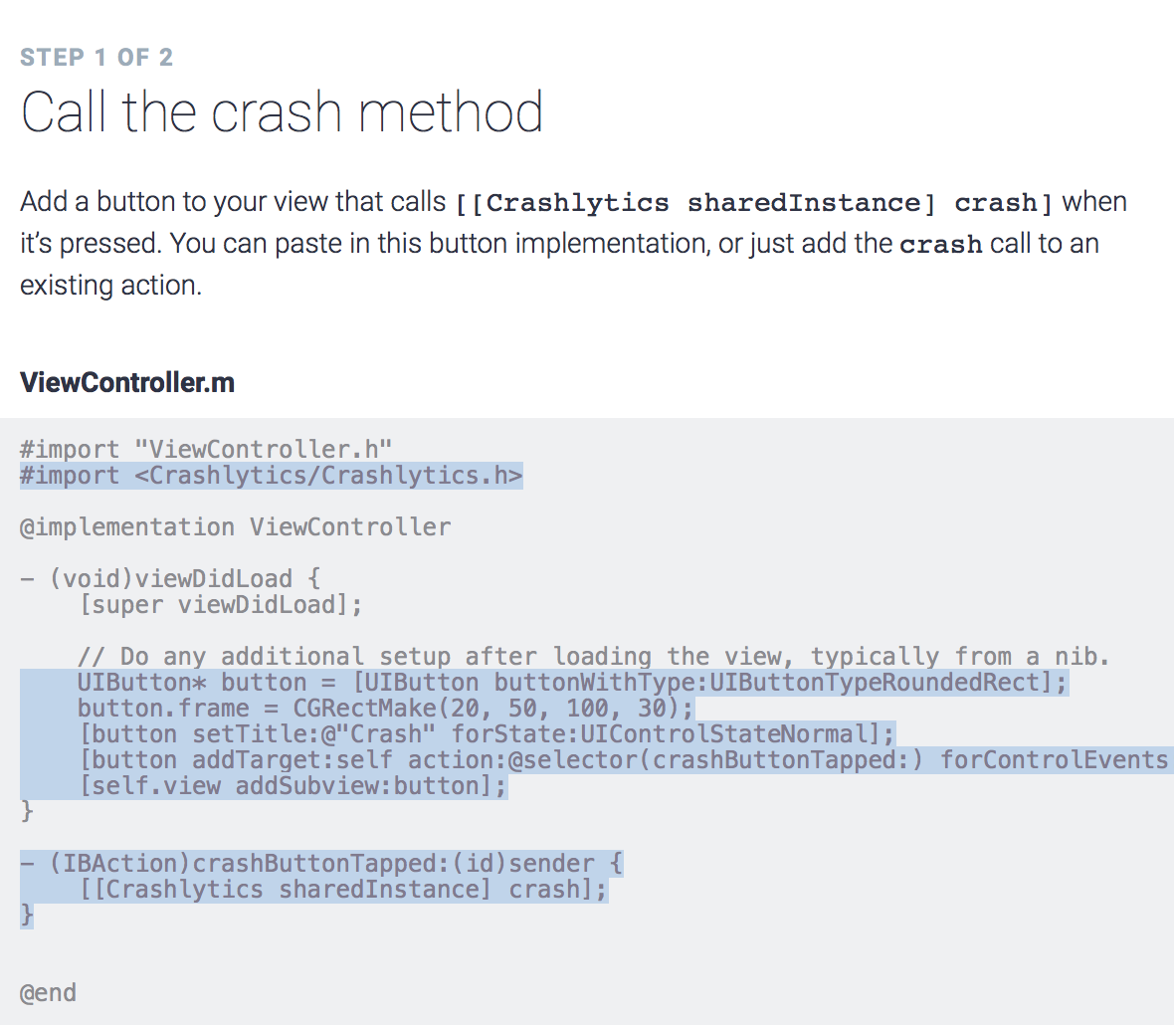 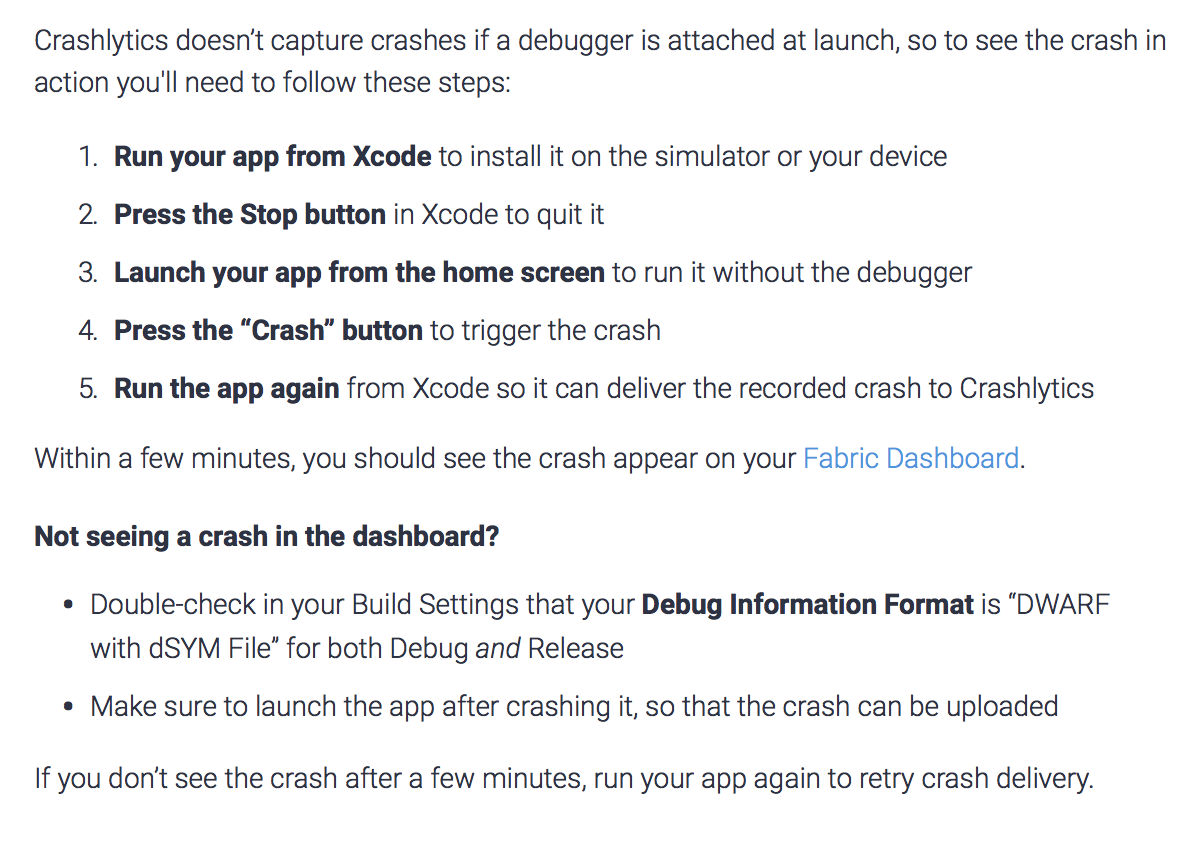 After doing this, be patient and wait for a few minutes.

Have you tried running [[Crashlytics sharedInstance] crash] on a device and seeing if that gets reported? There are a few reasons why Crashlytics might not work including other crash reporters etc.

If you don't upload the dSYM file, Crashlytics will not show your crash even though the report successfully uploaded.

You could run into this problem, if you have set up your build-script to only run on your CI server. Then if you have copied your app to your phone via xcode and you run it without being attached to the debugger, the report will be uploaded but ignored, because of the missing dSYM file.

Sometimes, it takes some time for the logs to show up. I am able to find them after 15-20 mins

With some of my other script, everything was ok, CrashLytics log show report submitted, but nothing was in the web interface.

When I add another Run script phase only with Fabric run, it appears like a magic :)

My first try was with cocoapods, but that did not work. When I manually add all the framework and a separate run script phase that worked.

This worked for me,

If you're testing on iDevice, just unplug iDevice with your Xcode and run your app. Now, If crashed it will be updated on dashboard.

Not the answer you're looking for? Browse other questions tagged ios crash crash-reports crashlytics or ask your own question.

6
Crashlytics not sending crash Reports to my Fabric dash board?
7
iOS - Crashlytics - missing several crashes
6
Crashlytics: A number of crashes shown in the dashboard, but no issue found
3
Getting Crashlytics DSYMs for debug apps
3
Is it possible to know the exact time of a crash?
4
Unable to upload missing DSYM files In Fabric Crashlytics with Bitcode enabled to NO
1
Crashlytics error code: 202 when Submitting files
2
Fabric Crashlytics is not send crash report after app was submitted to App Store

751
How do I obtain crash-data from my Android application?
440
Symbolicating iPhone App Crash Reports
615
iOS app with framework crashed on device, dyld: Library not loaded, Xcode 6 Beta
5
Crashlytics not Sending Crash Reports [iOS]
895
Xcode error "Could not find Developer Disk Image"
321
App installation failed due to application-identifier entitlement
45
Could not get crash report in Crashlytics / fabric. Showing error : "It looks like we are missing dSYMs to process crashes for the versions below."
24
Firebase Crashlytics not showing crash report in console dashboard swift
4
Update Firebase Crash report to Firebase Crashlytics: still on old dashboard