I'm trying to draw an image inside a canvas element using a data URI. I'm using Django and passing a variable containing the base64 encoding of the photo to the template. In the past, I have used that like so:

This works fine. I now want to replace that with this:

and use javascript to draw the image in the canvas. I tried out the code from this answer:

This gives me the javascript error "SyntaxError: unterminated string literal" on the last line. I read that this error usually happens because of line breaks. Upon inspecting the page source it looks like there are line breaks in there: 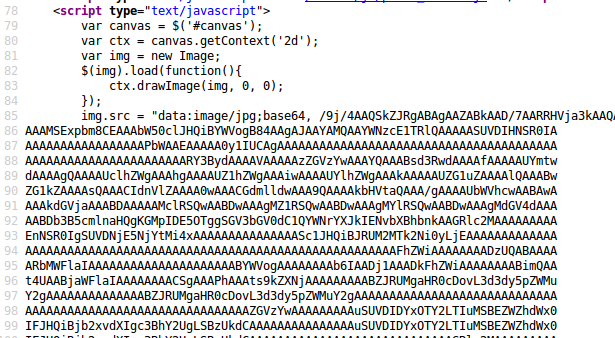 So then I tried removing line breaks:

Is there some sort of escaping I need to do, and if so how would I do it?

I tried all of the suggestions from the comments and the answer. So far the thing that has come closest to working is doing

on the Django side and

on the Javascript side. The image doesn't show at all if I don't replace the &quot;s, and when I do remove them only the top third of the image shows. I tried resizing the canvas element, that doesn't seem to be the issue.

Some people I work with like to put the + on the front of the line, claiming its easier to read.

Assume you have the image data, base64 encoded in a string. A sort of pseudo C/Java/Javascript like language would have code something like this (since I don't know Python):

Then you write the value of output to where ever you are putting your javascript.

Now a quick look a Django and Python stuff leads me to suspect it would look something like this in the template:

But you'd have to set up the photo_data_lines array with 100 character chunks of the image data in each element beforehand. (Or however long you want the chunks.)

Not the answer you're looking for? Browse other questions tagged javascript django data-uri or ask your own question.