How to use Tomcat 8 in Eclipse?

Tomcat 8 is still in development, but you can get it here. Now there is a RC version on the main Apache Tomcat page. Update 2/27/14: 8 is released now, and adapters built for WTP, just not integrated into eclipse bundles yet. Soon!

In Eclipse Kepler though, there is no supported adapter in the add server list for Tomcat 8. the Tomcat 7 adapter doesn't work, and it doesn't look like there's a new extension for it to download in the "Install new Extension" dialog.

Is my only option to get it (Tomcat 8) running locally outside of Eclipse and maybe hook a remote debugger into it for stepping through code? Will that even work for Eclipse Kepler + Tomcat 8? IntelliJ IDEA 12 couldn't do it in the 30 minutes of time I put into that path.

If you're wondering why I'm trying to do this at all, I'm playing around with Spring 4.0.0.M1 and 4.0.0.M2 WebSocket stuff. They (per Rossen Stoyanchev's Spring 4.0 blog post and examples) use JSR-356, which is implemented in Tomcat 8, theoretically to be back-ported at some point to Tomcat 7.

An answer to the broader question of "How can I easily get a development environment going for Spring 4 WebSocket support?" would be nice, but it would also still be nice to know how to plug in unsupported web servers to Eclipse.

That said, it's not very hard to debug with Tomcat 8 inside Eclipse. Just change the last line in bin/startup.sh to be (note the addition of "jpda"):

Inside Eclipse create a remote debugging configuration for localhost port 80, launch it after starting Tomcat, and you can put breakpoints in the source code.

UPDATE: Eclipse Mars EE and later have native support for Tomcat8. Use this only if you have an earlier version of eclipse.

The latest version of Eclipse still does not support Tomcat 8, but you can add the new version of WTP and Tomcat 8 support will be added natively. To do this:

Start Eclipse and you should have a Tomcat 8 option available when you go to deploy. 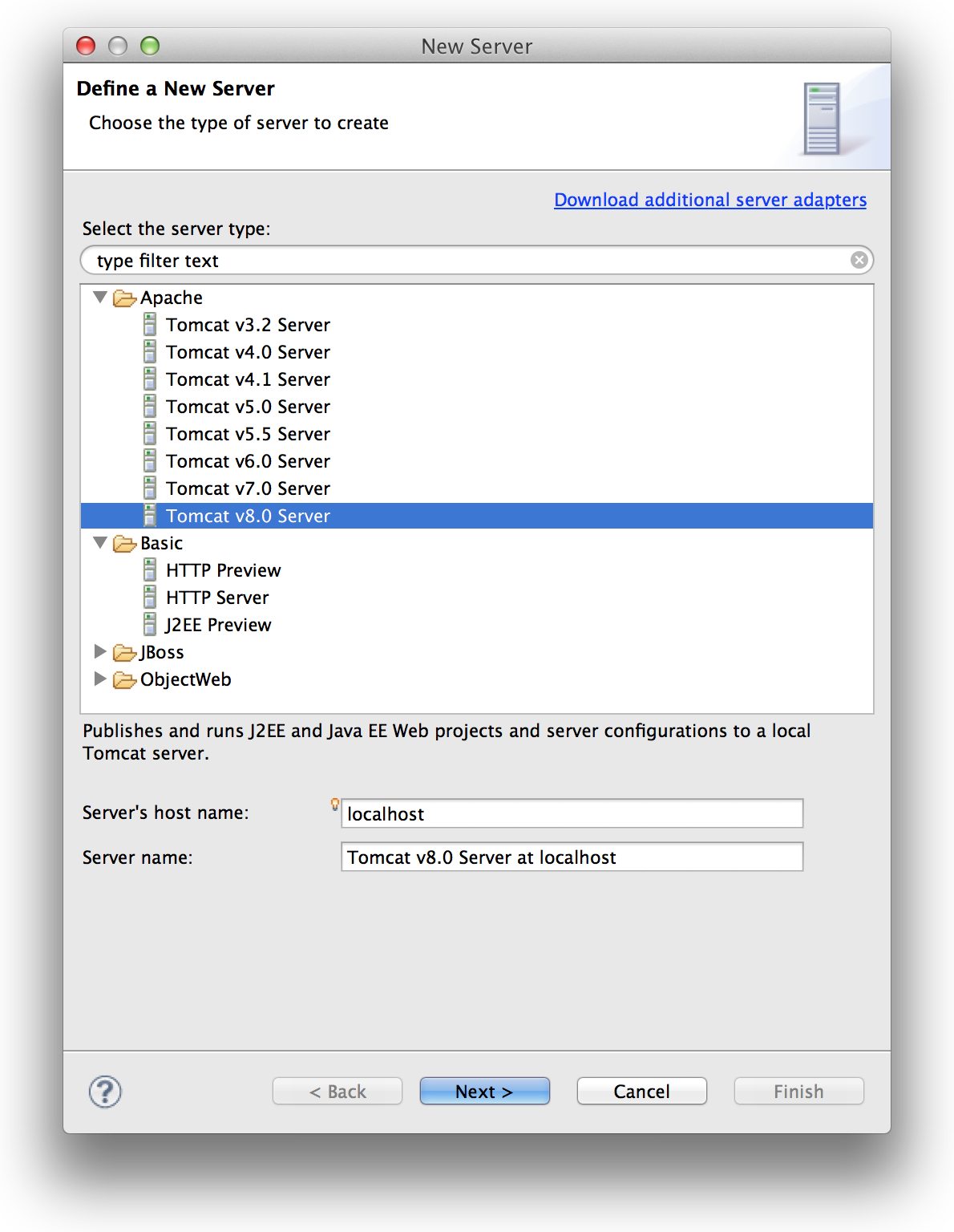 And then I find the WTP Update site http://download.eclipse.org/webtools/updates/.

Then Help -> Check for update, just works, I don't know whether Jason's affect this .

The only thing the eclipse plugin is checking is the tomcat version inside:

In order to be able to deploy the spring-websockets sample app you need to edit the following file in eclipse:

And change the web version to 2.5

This should be a comment under the accepted answer, but I don't have 50 reputation yet.

I first selected Released 3.5.2, which like others did not work for me. Then I picked Integration 3.6.0, and saw Tomcat 8 for New Project of Dynamic Web Project.

I have tried below and it worked for me.

In addition to @Jason's answer I had to do a bit more to get my app to run.

To add the Tomcat 9.0 (Tomcat build from the trunk) as a server in Eclipse.

Update the ServerInfo.properties file properties as below.

Build the tomcat server from trunk and add the server as tomcat7 instance in Eclipse.

The latest version of Springsource STS (3.6) supports Tomcat 8. It is based on eclipse Luna 4.4 and supports Java 8. Have at it!

Downloaded Tomcat 8 and configured new server in Eclipse. I am able to setup tomcat 8 now in Eclipse luna

If you have untarred your own version of tomcat v8 with a root user into a custom directory (linux) then the default permissions on the TOMCATROOT/lib directory do not allow normal user access.

Eclipse will not be able to see the catalina.jar to check the version. So no amount of fiddling aorund with the server.properties will help!

Not the answer you're looking for? Browse other questions tagged eclipse tomcat websocket eclipse-kepler or ask your own question.

1797
How to duplicate a whole line in Vim?
1298
How can you speed up Eclipse?
919
How do I change Eclipse to use spaces instead of tabs?
749
How can I show line numbers in Eclipse?
1287
'Must Override a Superclass Method' Errors after importing a project into Eclipse
1960
"Debug certificate expired" error in Eclipse Android plugins
210
Eclipse debugger always blocks on ThreadPoolExecutor without any obvious exception, why?
36
How to prevent eclipse from deploying test classes on Tomcat?
30
The APR based Apache Tomcat Native library was not found on the java.library.path
23
How to add Tomcat 8 to Eclipse Kepler without installing the big whole WTP package