When running a console application in Visual Studio via "Start without Debugging" (Ctrl+F5), the console remains open at the end of the run asking to

thus requiring to activate the window and hit a key. Sometimes this is not appropriate.

Why this matters: At the very moment I write json serialisation code, my workflow goes like this:

do this again and again, no need to debug anything, just trimming serialisation and check output is good.

It is workflows like this, where the "press any ..." behavior is hindering as it requires the steps

I'm pretty sure that you cannot affect or change this behavior.

As you mention, it has nothing to do with your application itself, because it doesn't do it when you double-click on the EXE. You only see this effect when you run the app from within Visual Studio without the debugger attached.

Presumably, when you invoke Ctrl+F5, Visual Studio is running your app in a particular way that causes the console window to remain open. I can think of two ways it might be doing it:

With either of these, the pausing behavior you're seeing is baked right into the command used to launch your app and is therefore external to your application. So unless you have access to the Visual Studio sources, you're not going to change it. Calling an exit function from your app won't have any effect because your app has already quit by the time that message appears.

Of course, I can't see why it really matters, aside from an issue of curiosity. This doesn't happen when you start the app with the debugger attached, which is what you'll be doing 99% of the time when you launch the app from the IDE. And since you don't ship Visual Studio along with your app, your users are going to be starting the app outside of VS.

In response to the updates made to your question, the best solution would be to change your app so that it is not a console application. This behavior doesn't affect standard Windows applications; when they get closed, they close for good.

If you do not require any output on the console window, then this is very simple to do: just change the "Application type" in your project's properties. A Windows Forms application will work just fine. If you do not display a window (aka form), one will not be automatically created. This is the difference between regular Windows applications and console applications, which always create a console window, whether you need one or not.

If you do need to display output on the console window, you have a couple of options:

I found a solution that works if you are using python (I could not test anything else). You need to go to

I hope you can apply this somehow to your problem.

It also closes the console in "Start Without Debugging" mode ;)

The setting is a little buried, but works : 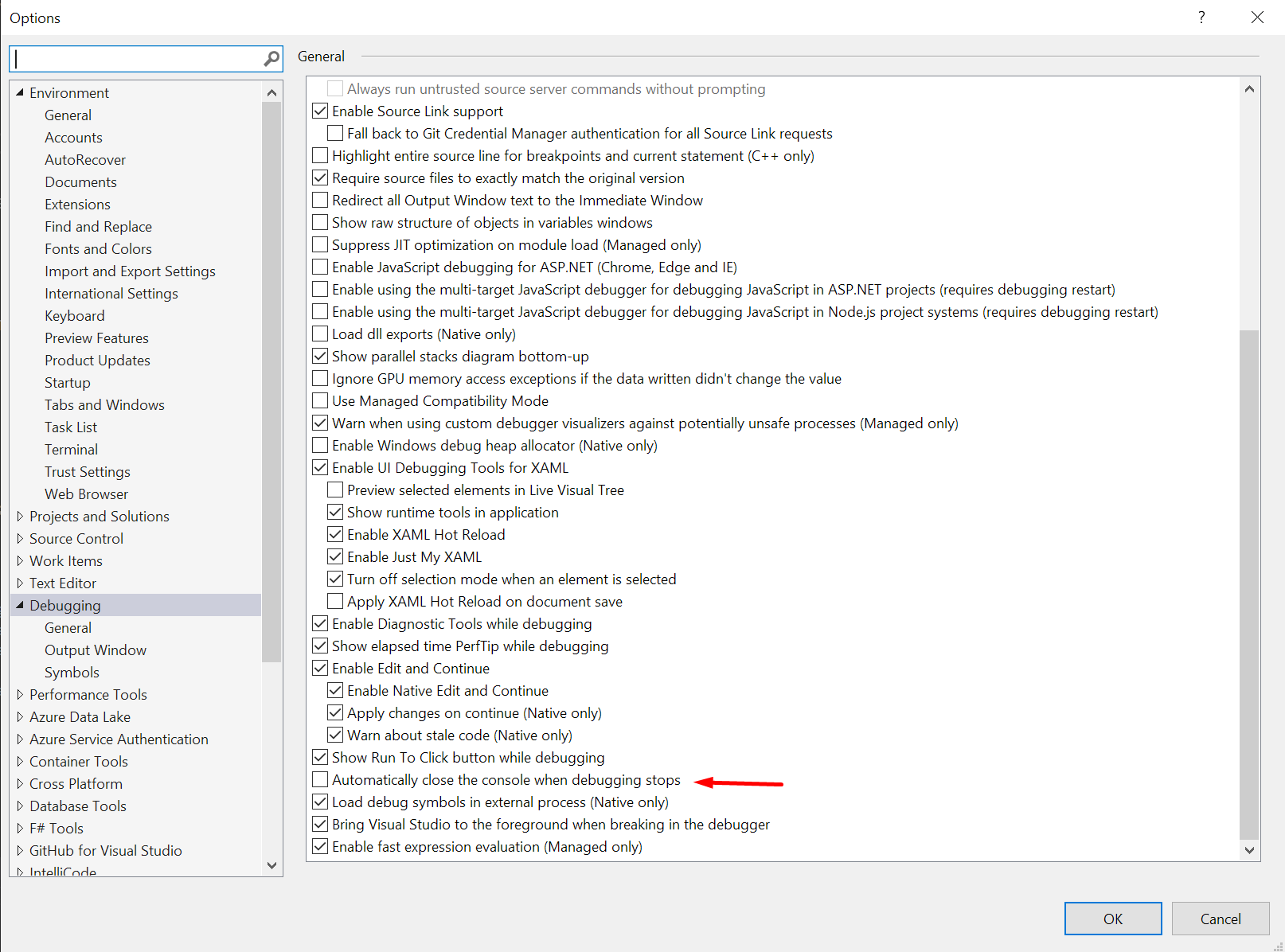 Removes the "Press any key to continue....."

According to the VS2019 documentation:

It works, but only if you make sure your project starts with the debugger on. This sounds trivial, but I was trying at first with a solution with two projects, one Console one to copy files to use in my app, the other to run the actual app. I set the Console one to Start without debugging because I don't need debugging on it, but that did not close it after it ran. Only when setting it to Start (with debugging) this option worked.

In vs2017 you have to uncheck the python environment setting under the vs-options:

Not the answer you're looking for? Browse other questions tagged visual-studio console-application or ask your own question.

47
How do I convert a .NET console application to a Winforms or WPF application
10
How can I detect if "Press any key to continue . . ." will be displayed?
4
WPF Console app doesnt return to prompt once finished
0
breaking out a loop in c#
0
C++ code to immediately close console window
-1
How to display a string backwards on the same line?
0
Wait for key when my console app ends, no matter how it was launched
0
How to close the console window after the program?
1
Debug console C++ program without closing the window automatically in Visual Studio 2013