MySQL: The quickest way to split a big table into small tables

I have a very big table, which has almost 300 million records. Since the select query is too slow for me, I want to split it into about 800 small tables.

I want to split the table based on the value of first column(e.g. record with XXXXXX splits into table XXXXXX), what's the quickest way to make it ?

Note: I have already added 10 partitions for it, but it doesn't speed it up very well.

Partitioning works as a performance strategy under two circumstances:

I'm presuming that the primary reason to want to split up this table is for performance. But 800 partitions? If performance improvement is what you're after, that may be the wrong approach. Enterprise databases keep as much top-level table indexes in cache memory for good performance. In a five-level b-tree, for a moderately used table, it's quite possible that the top three levels are always kept in cache, after their first access (this is a likely configuration for a 300M row table with an integer primary key). By splitting your table into 800 pieces, that means there will be 800 data structures to try to keep cached (in addition to table data itself). Chances are, if your access is more-or-less evenly distributed by the primary key, that searching on one partition will end up pushing other partitions out of cache, to the ultimate detriment of overall performance.

Nevertheless, if you're determined to do this, the easiest way to partition a table into N pieces is to partition it by the MODULUS of number of partitions you want against the primary key (primary_key % 800, in your case). Newer version s of MySQL also have hash partition support, making partitioning into arbitrary numbers of sets fairly strightforward:

If you want to put your data into 800 actual tables, instead, you'll have to do so editor magic, or use a scripting language, and do it in SQL:

You could do this in a loop in your favorite programming language using dynamic SQL: that would probably be the easiest to render.

Thank you for each one who inspired me for this stored procedure ! I'm happy to share it with you : 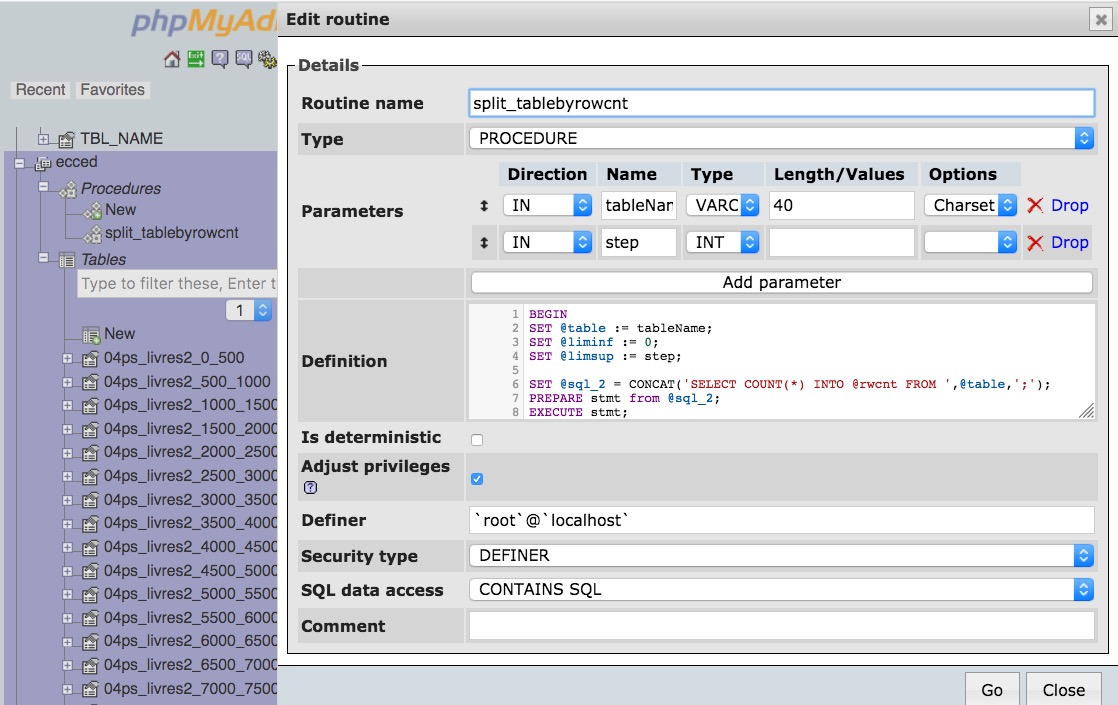 To execute the procedure : CALL split_tablebyrowscnt('myTable',100)

97
MySQL sharding approaches?
0
Fast splitting a MySQL table based on the values of a column
0
How to optimize huge database

988
How can I find all the tables in MySQL with specific column names in them?
123
Which is more efficient: Multiple MySQL tables or one large table?
1080
Insert into a MySQL table or update if exists
1081
How to get the sizes of the tables of a MySQL database?
367
MySQL vs MongoDB 1000 reads
4
Mysql + big tables = slow queries?
0
Can I create hash index in a partitioned table?
2
split one big table to multi tables
0
Is it a good idea to distribute records of one table into several multiple tables having similar table structure