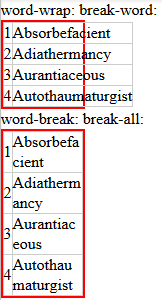 The word-break property in CSS is used to specify how a word should be broken or split when reaching the end of a line. The word-wrap property is used to split/break long words and wrap them into the next line.

Difference between the “word-break: break-all;” and “word-wrap: break-word;”