why there are two virtual destructor in the virtual table and where is address of the non-virtual function （gcc4.6.3）

I implemented a simple test to check the memory rank of Derived class, so I find there are two virtual destructor address in the virtual table of Derive class. Can someone explain it to me?

are destructors of derived class. Why are there two?

And I have another question: Where is the address of the non-virtual member function? I find the non-virtual function address does not exist in the memory of the derived class. Where is it?

The address of the non-virtual member function, well you said it, it's not virtual which means it doesn't need to be in the virtual table. Why? Well it doesn't depend on the runtime type of the object, only the static type meaning the compiler can figure out at compile time which function to call so the call is resolved then instead of using late binding during execution. The function itself is in the code section somewhere and so at compile time the functions address is inserted at the call site directly.

Ok now onto the fun stuff. I did some digging around in the visual studio watch list and here is what I found:

So yeah you have your destructor twice, once per base essentially. If I remove the second base of Derive (making it only inherit from Base1) we get:

Here is a screenshot of the watch list and locals window. If you take a look at the values in the watch list you'll see theres a gap between the start of the object Derive and the address of a, that is where the first vtable fits (the one for Base1). And secondly you'll find the same gap between a and b, that's where the second vtable fits (the one for Base2). 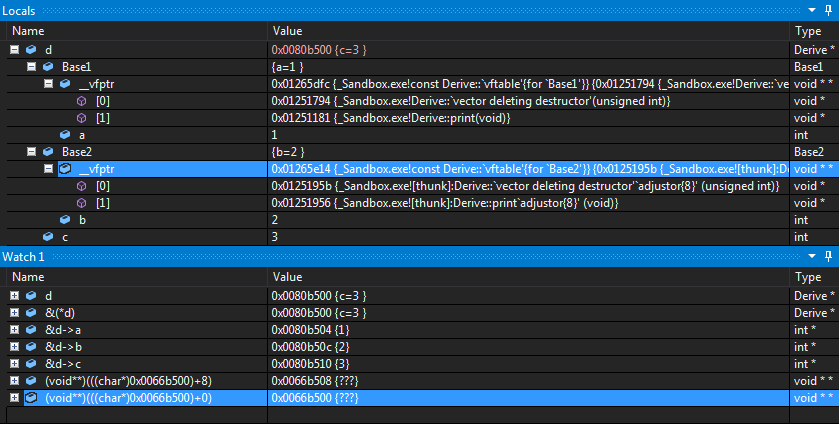 Alright, so I ran this code in gcc using QtCreator on Windows with -fdump-class-hierarchy and this gave me:

So we can clearly see that there are indeed 2 entries which are destructors of class Derive. This still doesn't answer why yet which is what we've been searching for all along. Well, I found this in GCC's Itanium ABI

So, the rationale for why there are two seems to be this: Say I have A, B. B inherits from A. When I call delete on B, the deleting virtual destructor is call for B, but the non-deleting one will be called for A or else there would be a double delete.

I personally would have expected gcc to generate only one destructor (a non-deleting one) and call delete after instead. This is probably what VS does, which is why I was only finding one destructor in my vtable and not two.

Alright I can go to bed now :) Hope this satisfies your curiosity!

This must be specific case to your compiler, I did the same in g++ and result only one destructor call only.

yes, for non-virtual member functions you need to go to base class.

Non-virtual function address does not exist in the memory of the derived class.

Not the answer you're looking for? Browse other questions tagged c++ gcc or ask your own question.

3464
What are the differences between a pointer variable and a reference variable in C++?
1199
Where and why do I have to put the “template” and “typename” keywords?
230
Why does an overridden function in the derived class hide other overloads of the base class?
2239
What are the basic rules and idioms for operator overloading?
8
Low level details of inheritance and polymorphism
0
Cannot find the virtual function address of derived class in virtual function table
0
Why we are not using a pointer in instantiating the entity object in the code given below of C++?