Windows Phone 7 had a anonymous user ID property called ANID. Windows Phone 8 has replaced that with ANID2. The difference is that ANID2 is dependent on the app's publisher ID.

It's possible to convert ANID to ANID2 as the following code sample on MSDN shows. Only things you need are the original WP7 ANID and the publisher ID (guid). The problem is that the example is in C++. I've been trying to port it to C# but with no success.

The algorithm itself is quite easy:

The problem is that I'm not able to get the results match. I've made sure that the C++ works correctly by creating two apps (WP7 and WP8), running them on same devices and then converting the ANID from WP7 app using the publisher GUID. On C++ the converted ANID2 and the ANID2 from the device match. On C# the converted ANID2 is something else.

The C# code is simple:

The C++ version uses something called CNG (Cryptography API: Next Generation). Here's some code from it:

After which the "pUniqueId" is converter to Base64 using some custom built function.

Update: Visual Studio reports that the anidBytes (C#) and pAnidId (C++) (this is the ANID string converted to bytes) both have length of 44. This is how C# debugger reports the byte array: 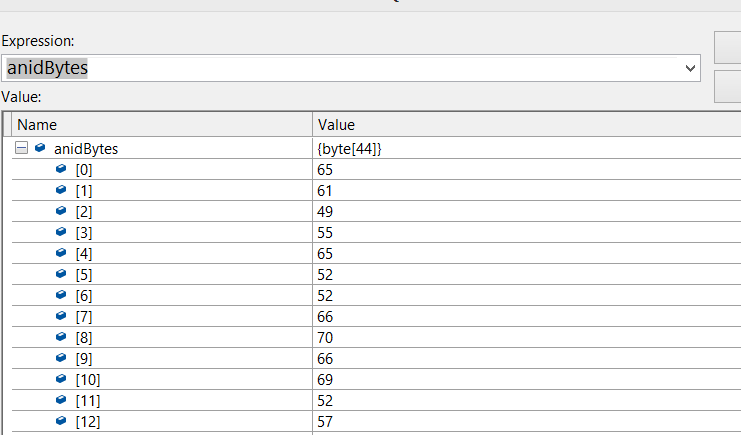 And here's the C++ debugger: 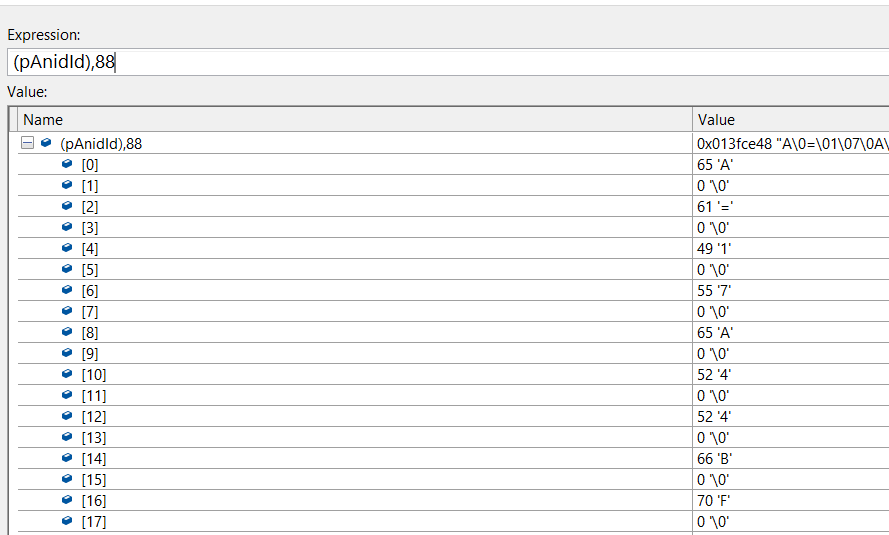 Another byte array comparison is the publisherGuid (C#) vs pPublisherId (C++) (publisher id as GUID). I think they again match. C#: 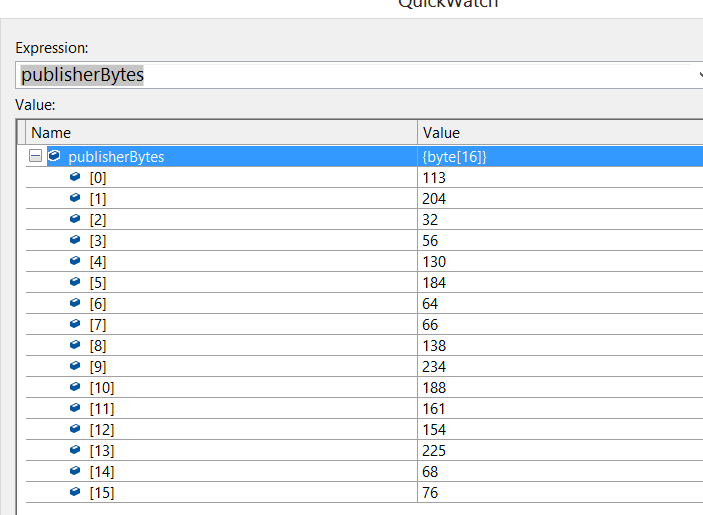 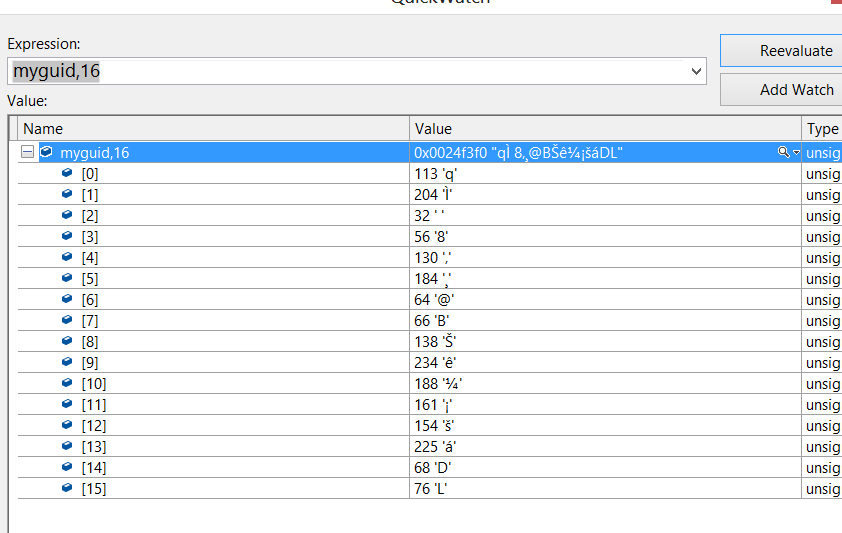 If I then look at the output after the value has been crypted, I can see a difference:

On C# I get the output from this code:

On C++ code, if I check the pUniqueId (result of BCryptFinishHash), I see this: 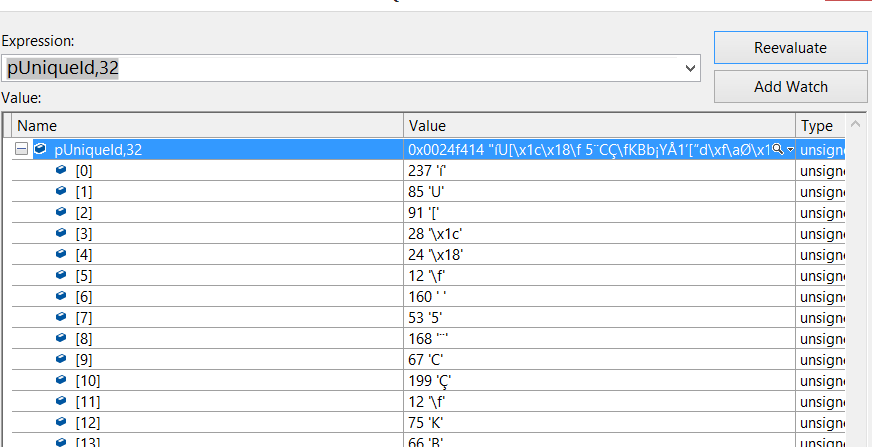 The length seems to be the same in both of these cases but the outcome isn't.

On C#, if I change the encoding type from UTF8 to Unicode, the anidBytes byte array changes to this: 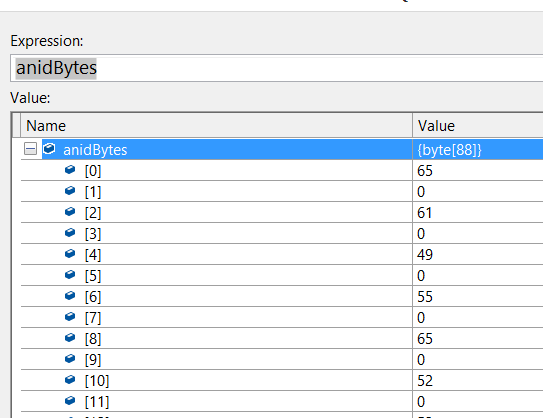 So it's identical to what C++ debugger shows. Also the result changes but it still differs from C++. Here's the new C# outcome: 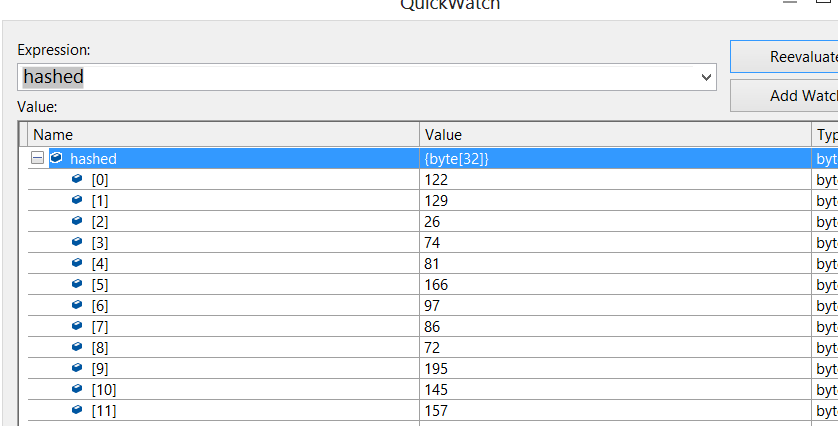 This is the correct result from C++: 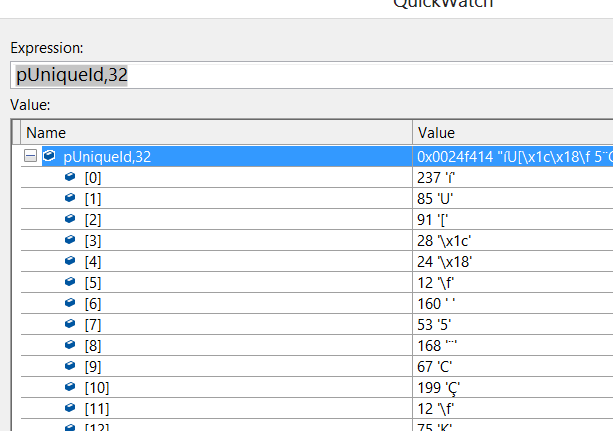 Make sure you cut the ANID byte array into half before you use it as the secret key for the HMACSHA256. The conversion algorithm only needs the first 44 bytes and not the entire 88. Don't ask me why, but AFAIK, it's a bug in the C++ code they use when converting ANID to ANID2 if you look at the sample code at http://code.msdn.microsoft.com/wpapps/ANID-to-ANID2-Converter-cc428038 - they must have mistaken wchar for char!

In C#, for your HMACSHA256 object, try setting the Key property rather than initializing it in the constructor.

http://msdn.microsoft.com/en-us/library/9c9tf8wc.aspx says that the constructor pads the key to 64 bytes.

Not the answer you're looking for? Browse other questions tagged c# c++ windows-phone-8 cng or ask your own question.

3
How to get WP7-style ANID on Windows Phone 8?

51
How do I generate a hashcode from a byte array in C#?
1
Can I convert an ASCII MD5 hashed password into a Unicode MD5 hashed password?
564
Curious null-coalescing operator custom implicit conversion behaviour
2
How can I Encode String , ByteArray in ActionScript as VB or C#
7
C# How to verify signature on JWT token?
10
Is there any way to generate a UUID in Java that is identical to that of the one generated in C#?
0
passing a very large string as byte array from C++ to C# with Dllimport
1
Trouble matching SHA512 hash from PHP with C# counterpart formula