What is a dangling pointer?

I know this is pretty common question, but still new for me!

I don't understand concept of dangling pointer, was googling around, and writing test methods to find one.

I just wonder is this a dangling pointer? As whatever example I found was returning something, here I'm trying something similar!

A dangling pointer is a pointer that points to invalid data or to data which is not valid anymore, for example:

This can occur even in stack allocated objects:

The pointer returned by c_str may become invalid if the string is modified afterwards or destroyed. In your example you don't seem to modify it, but since it's not clear what you are going to do with const char *name it's impossible to know it your code is inherently safe or not.

For example, if you store the pointer somewhere and then the corresponding string is destroyed, the pointer becomes invalid. If you use const char *name just in the scope of new_foo (for example, for printing purposes) then the pointer will remain valid.

A dangling pointer is a (non-NULL) pointer which points to unallocated (already freed) memory area.

The above example should be correct given that the string is not modified through new_foo.

Taken from here. Although, even if this is for C, it is the same for C++. 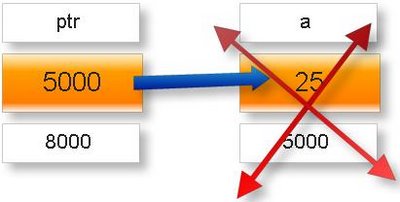 Its output will be garbage because the variable x is a local variable. Its scope and lifetime are within the function call hence after returning the address of x variable x becomes dead and the pointer is still pointing to that location.

As a matter of style, I explain a dangling pointer as "a pointer which still exists, even though the object it pointed to no longer exists".

In your case, the pointer name exists for a shorter period that the object that it points to. So it's never dangling. 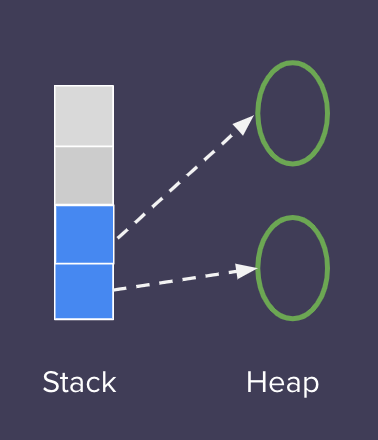 This is a security issue. Because when you deallocate a memory, we are informing Operating System, that we no longer need this section of memory. So OS will mark that piece of memory as ready to allocate and allocate to other applications when they request for memory.

Usually, in C++, memory allocated and deallocated through a general pattern. Constructor in a class gets invoked when a class initialised and this is the right place to allocate memory in heap.Destructor will be invoked when the class instance goes out of scope, and this is the right place to deallocate memory from heap. Assume we already created a class that does allocation and deallocation of memory in constructor and destructor respectively.

In the above example code, there are two variables declared but both holding the same value. When the constructor invoked, it allocates a heap memory. Then we are declaring one more variable and assigning the same value. In C++ usually, when you assign a value of complex type, it does a shallow copy (unless you explicitly implemented copy constructor) instead of deep copy. That means the only pointer gets copied in Stack, but not the heap memory. Actually it is not recommended to copy heap memory for performance reasons. Now the final memory layout looks like that we have two pointers pointing to the same heap memory. 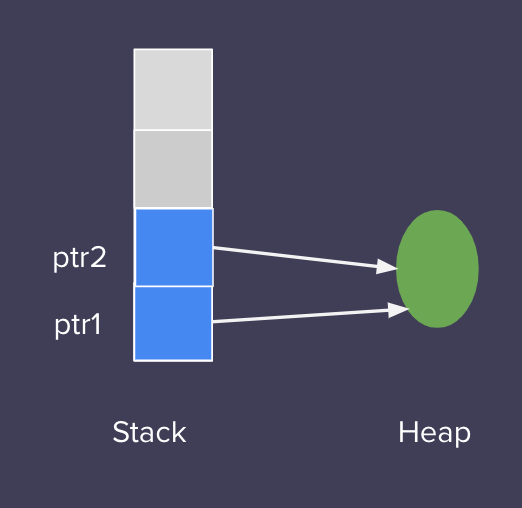 Now when the function is done with execution, local variables goes out of scope and it invokes destructor. First, pointer2 invokes destructor that deallocates the heap memory. At this point, pointer1 becomes dangling pointer. It points to a memory that is already deallocated. 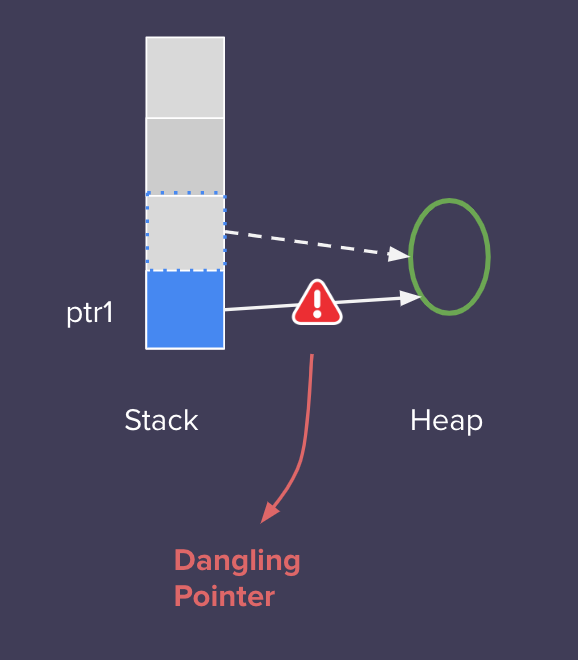 From this example, we understood that the primary cause of dangling pointer is having multiple owners for the same resource. Because when one pointer deallocates memory other pointers became dangling pointers.

Here are some examples: Dangling Pointer and dangling pointer problem

15
What is a dangling reference?
1
class constructor building struct at the same memory location on every instantiation but other members in their own memory locations?
2
Why std::string attribute is empty when instance of object is created by pointer initialization
0
Why is a local automatic object from a try block still alive in the catch block when I throw that object by address?
2
Compiler Removes Vector Returned By Reference
-3
Creating C++ STL Vector on heap of given size inside constructor
-2
two way to initialize a structure
-1
C++ [Warning] address of local variable 'bestIdx' returned [-Wreturn-local-addr]
-1
Return C++ reference wrapper
0
Linked List segmentation fault, class
See more linked questions

2969
What is the difference between #include <filename> and #include "filename"?
3807
What are the differences between a pointer variable and a reference variable?
2118
What is a smart pointer and when should I use one?
3543
What does the explicit keyword mean?
1721
What is the difference between const int*, const int * const, and int const *?
9960
What is the "-->" operator in C++?
2032
What is move semantics?
2464
What is The Rule of Three?
2414
What are the basic rules and idioms for operator overloading?
1858
Why should I use a pointer rather than the object itself?