Cannot Connect to Server - A network-related or instance-specific error

I get the following error when trying to connect to SQL Server:

A network-related or instance-specific error occurred while establishing a connection to SQL Server.

The server was not found or was not accessible. Verify that the instance name is correct and that SQL Server is configured to allow remote connections.

This error is thrown when I try to configure my database to gridview in Visual Studio 2010. I'm at a loss as to how to debug this error.

How would you debug this error? What steps should I take in order to determine what is really going on here, in addition to the one mentioned in the error message?

I found the following techniques helpful:

I got Solution for me :

Adding my heavily upvoted comment as an answer with screenshots.

I spent a lot of time on this, finally what worked for me is: 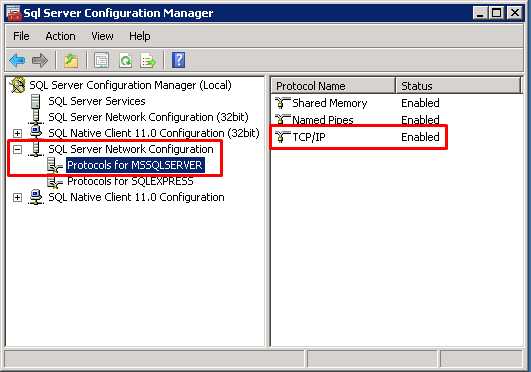 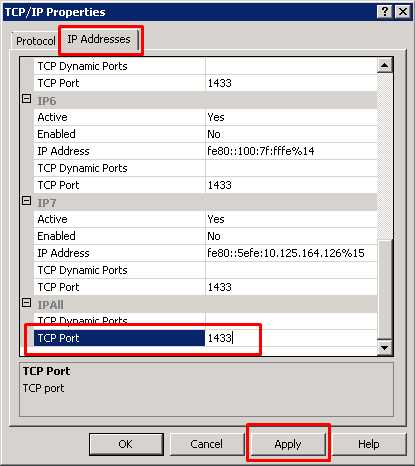 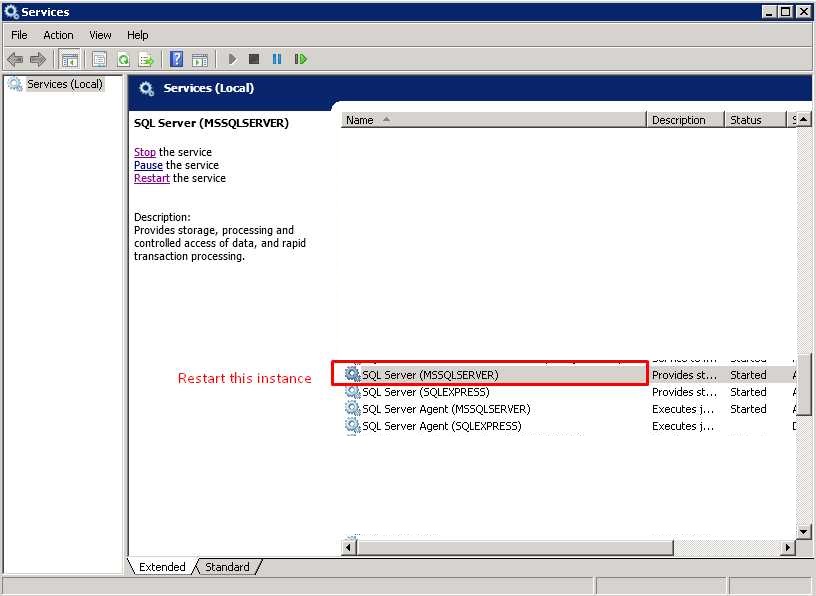 After this, the problem got resolved!

I am solving that problem by opening Services then start running Sql Server (Sqlexpress) service. 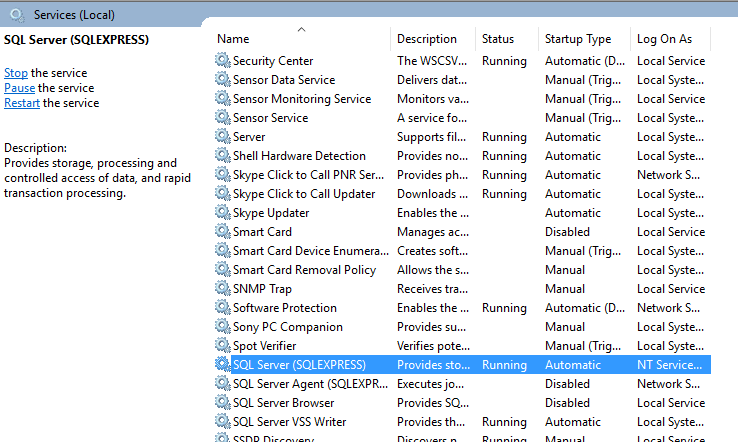 This Error mainly came when the SQL Service is stopped.You need to Restart the service.To go to this window you have to search the Services like this- 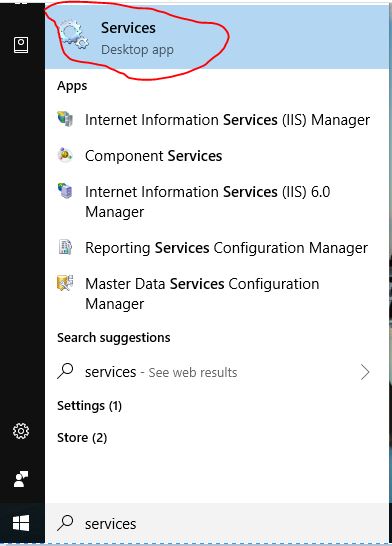 Then Search for SQLSERVER(MSSQLSERVER) and Restart the service. 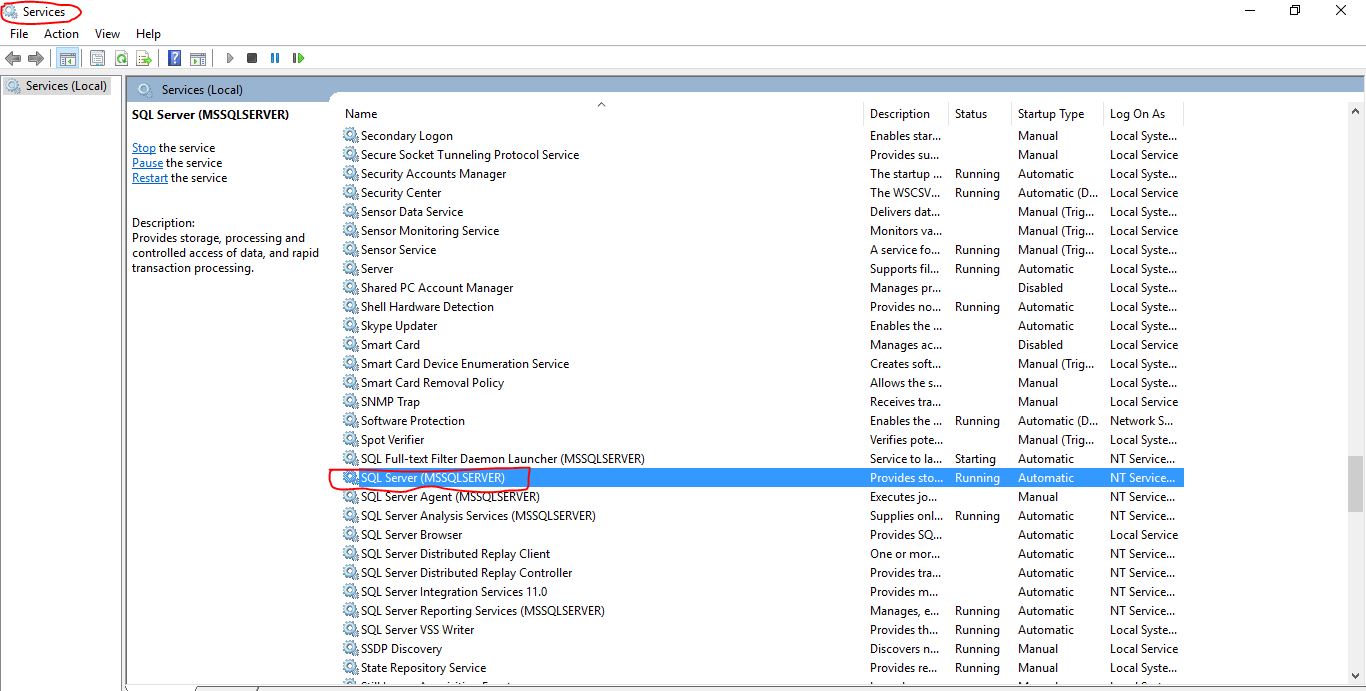 Hope this will work.

In case you might be using the Express Edition:

Add "\SQLEXPRESS" after your server name 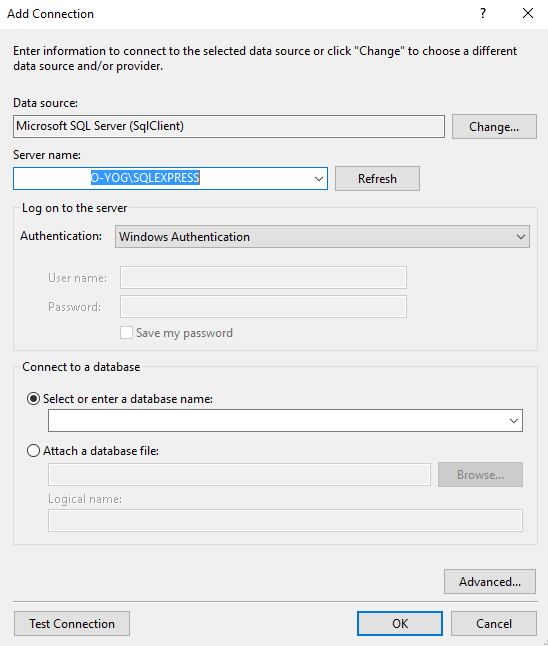 I had the same error when I wanted to run my WinForms project (that includes working with a SQL Server database and that worked perfectly on my PC) on another PC. The problem was in Windows Firewall on my PC. I solved this by adding two rules. This is the whole procedure how to allow SQL Server through Windows Firewall:

This is the YouTube link where you can see this procedure: Allow SQL Server through Windows Firewall

Press window + R (Run window Open) and in run window type "services.msc" and new services open find SQL SERVER with instance name in my case it's SQL SERVER(SQLEXPRESS) then start this service and try again it works for me Hope Its Works for You also.

I encountered the same problem In my case, I solved the problem in this way 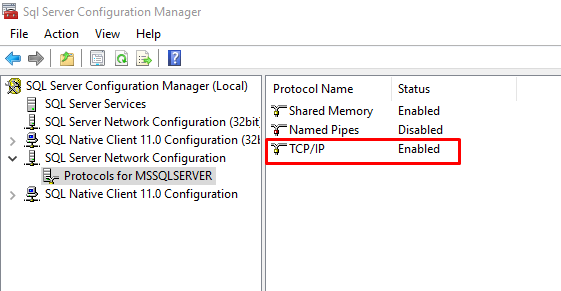 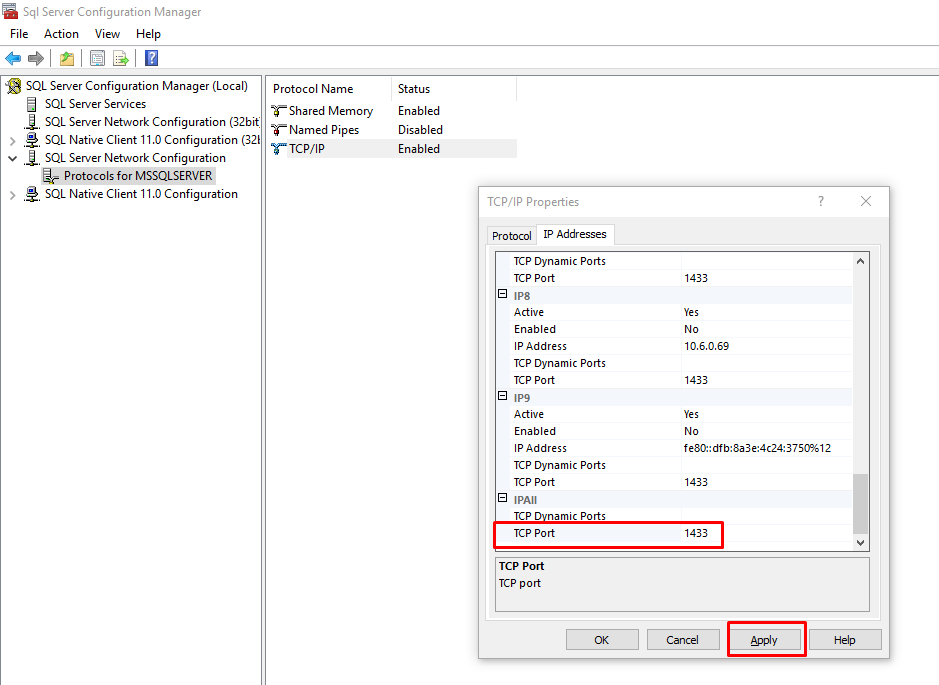 Step 4 : then pressed win+r and wrote services.msc opened the Services then scrolled down then right clicked on SQL Server (MSSQLSERVER) choose restart

That resolved my problem. Even if doing all of the above steps do not solve the problem then simply restart the PC then hopefully it will work.

I answered a similar question here, you need to stat the other open Run type-> services.msc - under services -> sort by stopped you will see a bunch of stopped SQL services Right click and start

To begin - there are 4 issues that could be causing the common LocalDb SqlExpress Sql Server connectivity errors SQL Network Interfaces, error: 50 - Local Database Runtime error occurred, before you begin you need to rename the v11 or v12 to (localdb)\mssqllocaldb

I found that the simplest is to do the below - I have attached the pics and steps for help.

First verify which instance you have installed, you can do this by checking the registry and by running cmd 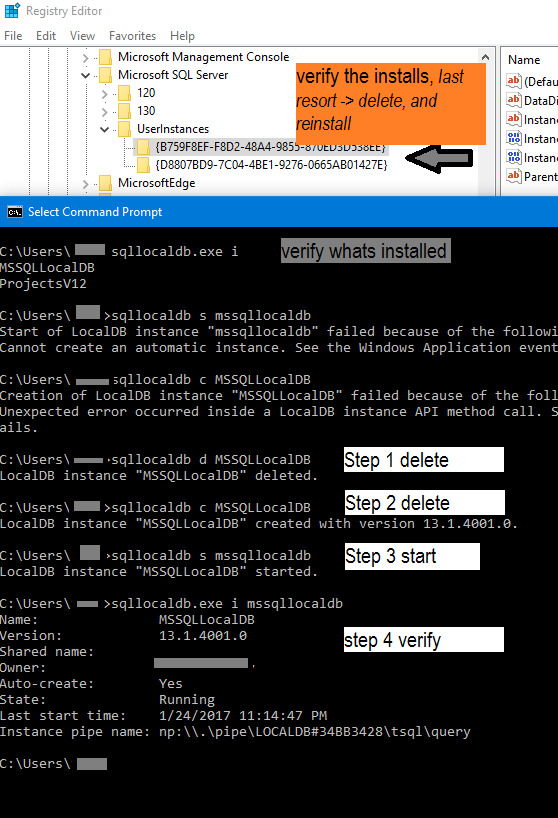 If none of the above solutions work (nothing worked for me) then just RESTART your computer and you will be able to connect to your sql server (localhost).

After doing everything mentioned here:
http://blog.sqlauthority.com/2009/05/21/sql-server-fix-error-provider-named-pipes-provider-error-40-could-not-open-a-connection-to-sql-server-microsoft-sql-server-error/ Still did not work for me.

Steps worked for me:

It will prompt you the server name. Make sure this server name is same as the one you are trying to get connected to in CONNECT TO SERVER box of SQL management studio.

I made this silly mistake I keep using MSSQLSERVER rather using this server name.

Hope this helps for the people who make silly mistake like me.

You can test the following methods.

In the middle tab find the record that 'local Port' is 1433, If you can't found it try to created it with following levels

First thing is to allow remote connection to SQL Server. What I did is to type sqlservermanager13.msc at start menu in order to open the SQL Server Configuration Manager. Make sure the TCP/IP status is enabled.

Check your TCP port number by double click TCP/IP protocol name. Usually it is 1433 by default. 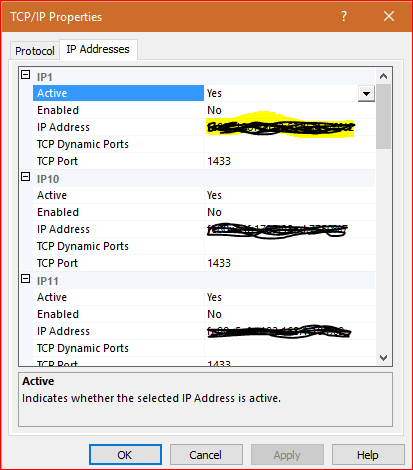 To open a port in the Windows firewall for TCP access

Another thing to configure.

To open access to SQL Server when using dynamic ports

I was experiencing the same problem and the problem was that I hade several projects in the solution (Weband Droid) and even though Default project was choosen in the Package Manager Console it used the connection string from the Droid project:

After setting the Startup Project to Web and the Default Project in Package Manger Console I got it to work.

You may check service status of MS SQL Server 2014. In Windows 7 you can do that by:

Happened to me atleast.

The same issue applied using SSMS2012 or SSMS2016. My access to the 10 sql servers using windows authentication was still the same. I could test this from another server. However, 2 of the 10 servers would not connect from my laptop. Both were ms sql server 9 but I could connect to other sql server 9 databases.

The solution was to add a firewall rule (using Windows Firewall with Advanced Security).

I'm not a network expert so I've not included the details but hopefully it will point you in the right direction.

Error msg (pre firewall rule) "A network-related or instance-specific error occurred while establishing a connection to SQL Server. The server was not found or was not accessible. Verify that the instance name is correct and that SQL Server is configured to allow remote connections. (provider: SQL Network Interfaces, error: 26 - Error Locating Server/Instance Specified) (.Net SqlClient Data Provider)"

When I experienced this error in Visual Studio,

...it was during the execution of the following C# code, which was attempting to obtain my SQL Server data to display it in a grid. The break occurred exactly on the line that says connect.Open():

It was inexplicable because the SQL query was very simple, I had the right connection string, and the database server was available. I decided to run the actual SQL query manually myself in SQL Management Studio and it ran just fine and yielded several records. But one thing stood out in the query results: there was some improperly encoded HTML text inside a varchar(max) type field within the Friends table (specifically, some encoded comment symbols of the sort <!-- lodged within the "Narrative" column's data). The suspect data row looked like this:

Notice the encoded HTML symbol "&lt;", which stood for a "<" character. Somehow that made its way into the database and my C# code could not pick it up! It failed everytime right at the connect.Open() line! After I manually edited that one row of data in the database table Friends and put in the decoded "<" character instead, everything worked! Here's what that row should have looked like:

I edited the one bad row I had by using this simple UPDATE statement below. But if you had several offending rows of encoded HTML, you might need a more elaborate UPDATE statement that uses the REPLACE function:

So, the moral of the story is (at least in my case), sanitize your HTML content before storing it in the database and you won't get this cryptic SQL Server error in the first place! (Uh, properly sanitizing/decoding your HTML content is the subject of another discussion worthy of a separate StackOverflow search if you need more information!)

Why this error is so boresome and noisy, just because it can occur in varied situation.

I have done all approchs above here, and still being sucked. So make sure u have done the same as me before browsing downward.

Maybe I am not able to fix ur situation instantly, but I can point out a direction or thinking to u(The one who finally slide down here). I have started to ponder the error of my running program occurring after I made sure that the instance name is clearly right and set my database to allow remote control following the methods above. After then, I suspected something wrong happening in my code snippet of SQL connection.

Solution of my problem: 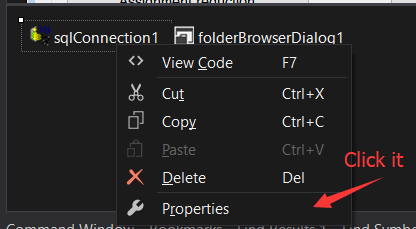 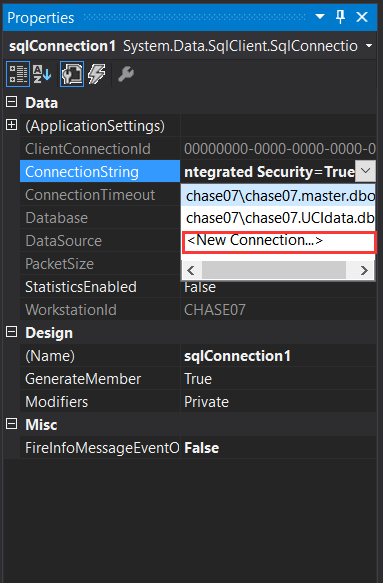 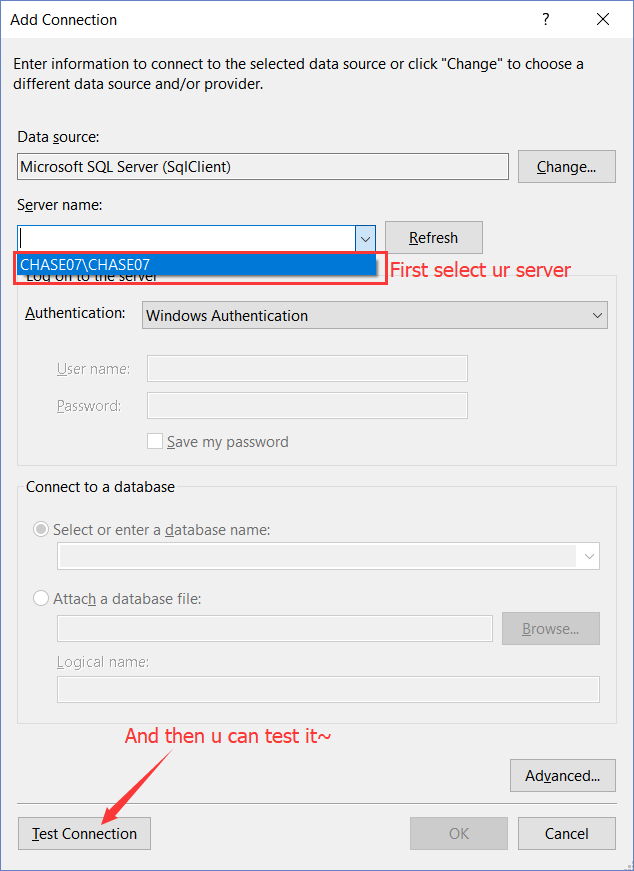 It works for me with pondering what exactly happen in the process of connection.Hope my thinking will lead u to kill ur error.

I tried all the other answers on this question and some if not all probably played a part in getting this working for me, but I still couldn't connect to the DB remotely. I was using a SQL Server on an Azure VM.

I eventually remembered that the VM has endpoints that are controlled by the Azure account proxy, so I went on to the Azure Portal and added 1433 as an available endpoint and I could connect to my SQL instance.

Hope this helps someone who has tried all the other answers and is still having no luck!

To fix this issue encountered while running local app vs remote database, use SQL Server Configuration Manager to add an alias for the remote database.

I had run into this problem recently when transitioning from a Windows 7 to a Windows 10 laptop. I was running a local development and runtime environment accessing our Dev database on a remote server. We access the Dev database through a server alias setup through SQL Server Client Network Utility (cliconfg.exe). After confirming that the alias was correctly setup in both the 64 and 32 bit versions of the utility and that the database server was accessible from the new laptop via SSMS, I still got the error seen by the OP (not the OP's IP address, of course).

It was necessary to use SQL Server Configuration Manager to add an alias for the remote Dev database server. Fixed things right up.

If you're encountering this while debugging in Visual Studio, make sure that the project build path points to a local drive, or follow these steps to grant permissions to the network folder.

My issue started when I tried to change the server from IIS Express to Local IIS (while using LocalDB).

I was using LocalDB (for dev purposes), and when I went to revert from Local IIS to IIS Express, Visual Studio had switched my data source from Data Source=(LocalDb)\MSSQLLocalDB to Data Source=.\SQLEXPRESS

Hope this helps someone out there.

Along with trying everything as suggested by Teo Chuen Wei Bryan, make sure you are also referring to the correct Server/Instance name in the connection string.

If you are using the short form of host name/Instance on the database server or in the web.config file, make sure you use the fully qualified domain name(FQDN)/Instance

Also, to test connectivity from a server where SQL server client is NOT present,

--> create a text file and change its file extension to .udl

--> Right click the file and you can see connection tab.

--> Input server name and log on information to test connection to the database server.

If you suddenly encounter this error say in a production environment and nothing has changed, try the following 4 items in the order below to see if it gets fixed.

Not the answer you're looking for? Browse other questions tagged sql-server visual-studio database-connection or ask your own question.