What is the difference between Polymer elements and AngularJS directives?

On the Polymer Getting Started page, we see an example of Polymer in action:

It seems like this is the equivalent to a directive module in AngularJS:

You're not the first to ask this question :) Let me clarify a couple of things before getting to your questions.

What is the difference between Angular and Polymer?

We covered some of this in our Q&A video. In general, Polymer is a library that aims to use (and show how to use) Web Components. Its foundation is Custom Elements (e.g. everything you build is a web component) and it evolves as the web evolves. To that end, we only support the latest version of the modern browsers.

I'll use this image to describe Polymer's entire architecture stack: 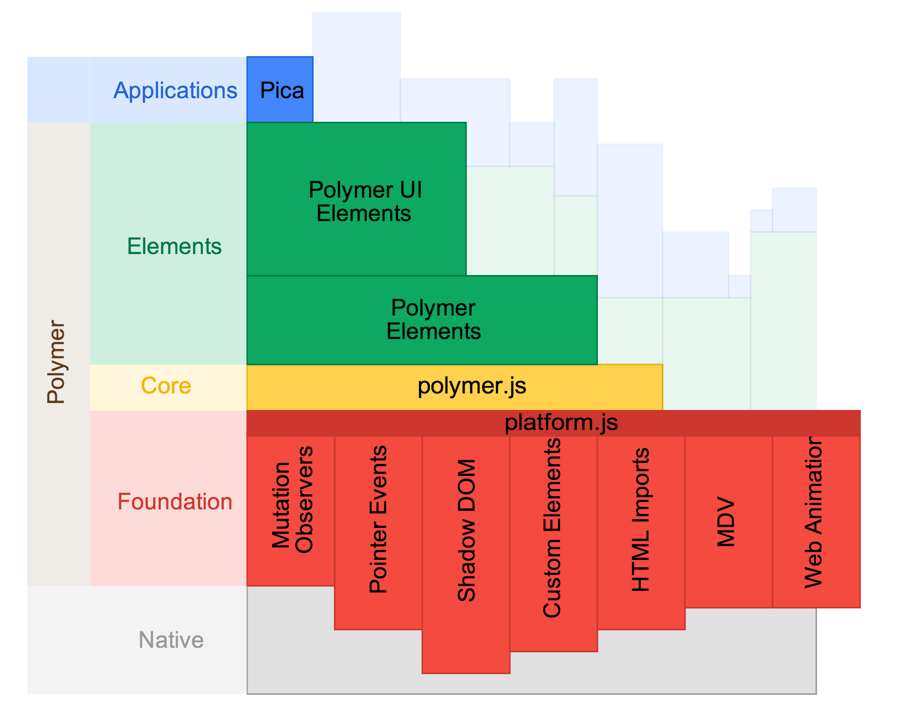 RED layer: We get tomorrow's web through a set of polyfills. Keep in mind, those libraries go away over time as browsers adopt the new APIs.

YELLOW layer: Sprinkle in some sugar with polymer.js. This layer is our opinion on how to use the spec'd APIs, together. It also adds things like data-binding, syntatic sugar, change watchers, published properties...We think these things are helpful for building web component-based apps.

GREEN: The comprehensive set of UI components (green layer) is still in progress. These will be web components that use all of the red + yellow layers.

See Alex Russell's answer. Basically, Shadow DOM allows composing bits of HTML but also is a tool for encapsulating that HTML. This is fundamentally a new concept on the web and something other frameworks will leverage.

Differences: Angular has high level APIs for services, filters, animations, etc., supports IE8, and at this point, is a much more robust framework for building production apps. Polymer is just starting out in alpha.

They're separate projects. That said, both the Angular and Ember teams announced they'll eventually move to using the underlying platform APIs in their own frameworks.

^ This is a huge win IMO. In a world where web developers have powerful tools (Shadow DOM, Custom Elements), framework authors also can utilize these primitives to create better frameworks. Most of them currently go through great hoops to "get the job done".

There's a really great article on this topic: "Here’s the difference between Polymer and Angular"

In this video 2 guys from AngularJS talked about differences and similarities about this two frameworks (AngularJS 1.2 and Beyond).

These links will bring you to the correct Q&A's:

1 & 2) Polymer components are scoped because of their hidden tree in the shadow dom. That means that their style and behaviour cannot bleed out. Angular is not scoped to that particular directive you create like a polymer web component. An angular directive could possibly conflict with something in your global scope. IMO the benefit you will get from polymer is what I explained.. modular components that have scoped css & JavaScript to that particular component that nothing can touch. Untouchable DOM!

3) Yes, Angular plans on incorporating polymer in version 2+ according to Rob Dodson and Eric Bidelman

It's funny how nobody here has mentioned the word scope. I think that is one of the major differences.

There are many differences, but they also have a heck of a lot in common when it comes to creating modular lego like pieces of functionality for an app. I think it's safe to say that Angular would be the application framework and polymer could one day live in the same app along side directives with the major difference being scope but polymer may be a replacement for a lot of your current directives. But I see no reason why Angular could not work as-is and include polymer components as well.

Reading through the answers again while I write this, I noticed that Eric Bidelman(ebidel) did kind of cover that in his answer:

"Shadow DOM allows composing bits of HTML but also is a tool for encapsulating that HTML."

To give credit where credit is due, I got my answers from listening to many interviews with Rob Dodson and Eric Bidelman. But I feel the answer wasn't worded to give this guy's question the understanding that he wanted. With that said, I think I have touched on the answer he is looking for, but in no way do I possess more information about the subject than Rob Dodson and Eric Bidelman

Here are my main sources for the information I have gathered.

Polymer is a Web Components shim

But Polymer is more than a polyfill library for web components... 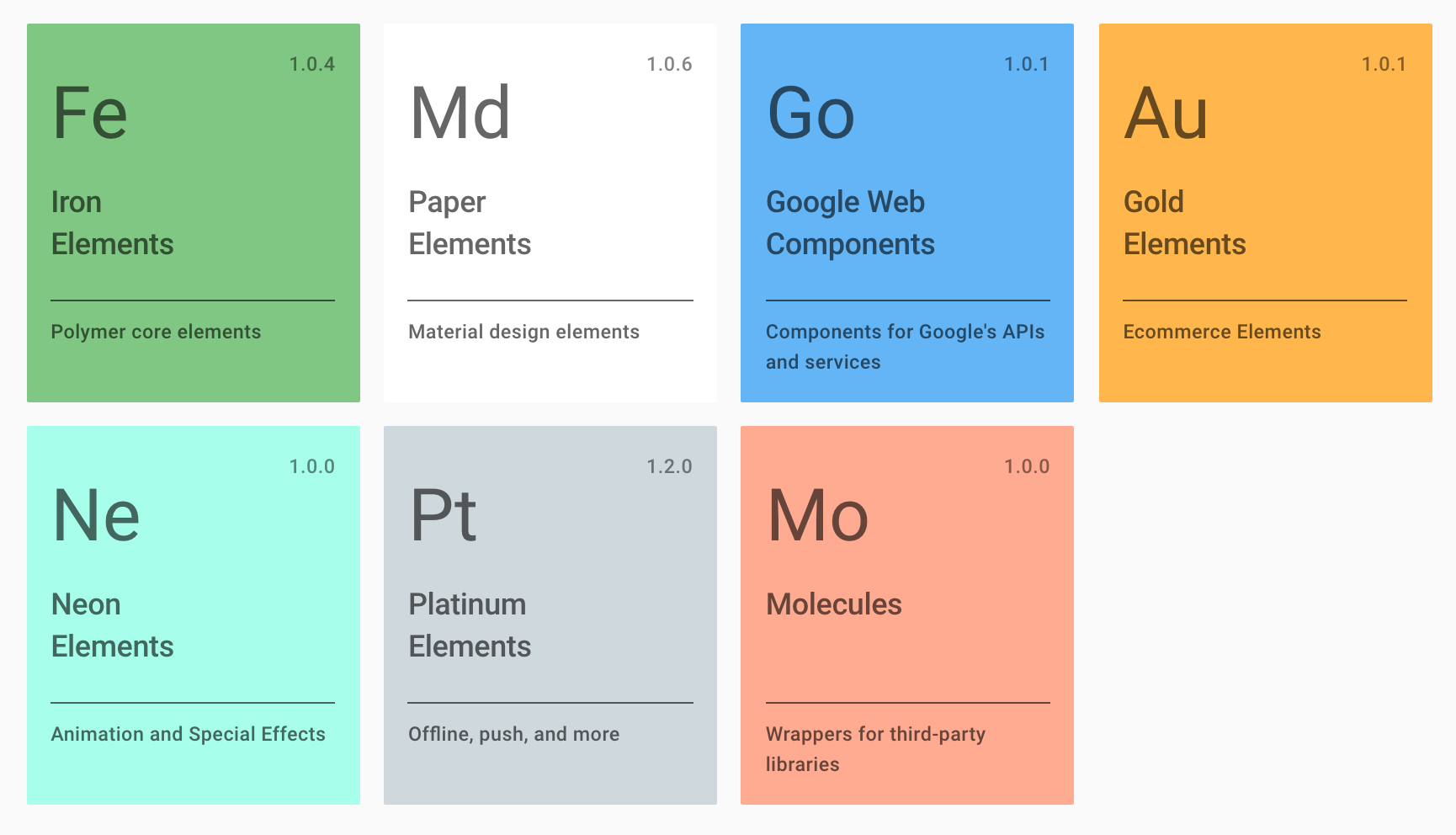 All elements can be customized and extended. These are used as building blocks for anything from social widgets to animation to web API clients.

Polymer is not a web application framework

I think from a practical perspective, in the end the template feature of angular directives, and the web component methodology leveraged by polymer both accomplish the same task. The major differences as I can see it are that polymer leverages web APIs to include bits of HTML, a more syntactically correct, and simplistic way of achieving what Angular does programatically as it renders templates. Polymer is however as has been stated, a small framework for building declarative and interactive templates using components. It is made available for UI design purposes only, and is only supported in the most modern browsers. AngularJS is a complete MVC framework designed to make web applications declarative by use of data bindings, dependencies, and directives. They're two completely different animals. To your question, it seems to me at this point you'll get no major benefit from using polymer over angular, except having dozens of pre built components, however that would still require you to port those over to angular directives. In the future however, as the web APIs become more advanced, web components will completely remove the need to programatically define and build templates as the browser will be able to simply include them in a similar way to how it handles javascript or css files.

The MVVM (model-view, view-model) that Angular offers is not a concern that Polymer aims at solving. The composable & re-usable nature that Angular directives give to you with (a custom tag + associated logic combination) is a more sane comparison when you consider comparing Angular and Polymer. Angular is and will remain a broader purpose-serving framework.

What is the difference between the two?

To a user: Not much. You can build awesome apps with both.

To a developer: They use way different syntax so either solution has a fairly steep learning curve. Angular has been around longer and has a HUGE community so you'd be hard pressed to find problems that haven't been solved.

To an architect: Very different. Angular is an application framework responsible for all aspects of your life. It even has directives vertically integrated in case you want component like features. Polymer on the other hand is more like pay-as-you-go. You want a modal, sure thing, you want an interactive widget, no problem, you want route handling, we can do that to. Polymer is also more portable in that Angular requires an Angular app to reuse directives. The idea with Polymer is be more moduler and will work in other apps, even Angular apps.

Polymer is an approach to head towards taking advantage of the new web components standards. If features like custom elements, Shadow DOM, and HTML imports are supported locally, it would be foolish not to take advantage of them. Currently most web component features are not widely supported (current status) so Polymer acts as shim or a bridge. Kinda like a polyfill (in fact it does use polyfills).

We have been using Angular and Polymer together for over a year. Part of the decision to do this was based on promises made directly by the Polymer team to us that interoperability be there. We have given up on that idea. We are now moving towards using only Polymer.

To do it over again we probably would not have made the move to use Polymer at all, instead wait for it to mature. That being said Polymer has it's pros (some quite good) and cons (some of which are quite frustrating) but I think that is a discussion for another thread.

Angularjs directive is an approach for making custom elements. you can define new custom tags with custom attributes. Polymer can also do this but it'll do in an interesting and more simple way.Polymer actually is not a framework it's just a library.but a powerful and amazing library that you can fall in love with it (like me). Polymer let you learn the native web components technology made by w3c, that web browsers eventually implementing it.web component is the future technology, but polymer let you use that technology right now.Google Polymer is a library that provides syntactic sugar and polyfills for building elements and applications with web components.Remember that I said polymer is not a framework and it's a library.But when you're using Polymer, actually your framework is DOM.this post was about angular js ver 1 and polymer and I has been worked with both of them is my projects and I personally prefer polymer over angularjs. But Angular version 2 is completely different in compare of angularjs ver 1.directive in angular 2 has a different meaning.

Not the answer you're looking for? Browse other questions tagged javascript angularjs polymer or ask your own question.

406
What is the meaning of polyfills in HTML5?
28
Polymer Elements vs Angular Directives
11
Difference between Angular Dart and Polymer Dart
7
Chrome Web Components: Polymer needed?
3
What are the pros and cons of creating custom HTML5 elements/widgets using in Polymer compared to AngularJS
4
where does angular fit in the context of web-component initiatives like mozilla brick and google's polymer?
2
AngularJS within polymer element