Has anyone successfully compiled the android kernel and tested it in the Android emulator, and if so is there anything that special that needs to be done?

Since August 2009 the kernel is no longer part of the standard repo manifest that you get when you follow the instructions to download the source code for the android open source project. The steps that are needed to successfully download, build and run a specific kernel on the emulator are as follows:

Note that I have used the default paths in the above description, you need to change them to what applies to your setup. It has been a some time since last time I tested this but I think it should work.

Some extra information: In the standard Android open source distribution the kernel is distributed as a pre-built binary in the mydroid/prebuilt/android-arm/kernel folder and the source code is not included. The kernel source was removed from the default manifest for two reasons as I take it. One is that it takes a lot of bandwith and diskspace for a platform component that most people will not work with much. The other reason is that since the kernel is built with the kernel build system and not as part of the aosp build system it makes sense to keep it separated. The common branch for the kernel is the one used by the emulator. There are also branches for experimental, msm (Qualcomm platforms) and Omap (TI platform) and maybe some more. If you want to use the Android kernel with hardware these may be more interesting to you.

Just to correct a few things from BMB's post (which was very useful to me, it saved my project) :

The out/ build directory takes up about 90Gb, and the rest of the tree about 40Gb, excluding CCACHE.

About 1-2 minutes after starting the emulator, the home screen shows: 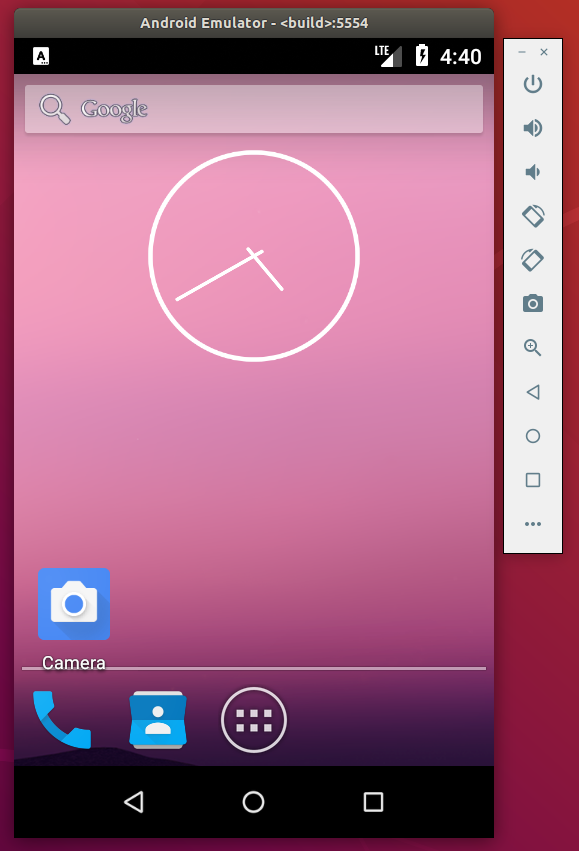 and if you press enter on the host terminal Android was launched from, you get a shell on to the Android system on your host terminal: 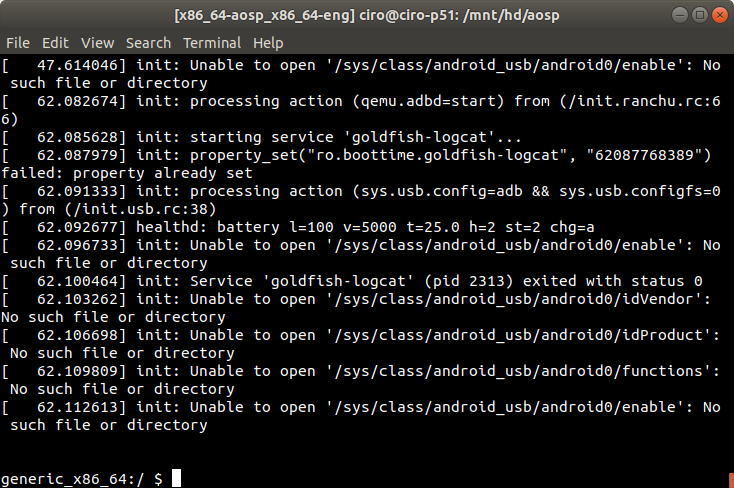 Hope this saves time for somebody.

As of 2012, downloading the kernel is well documented on source.google.com, however I found compiling it took a few tries. Here are the commands I used to build a kernel for the ARM emulator:

Thanks to all who answered this one -- I was able to do it with bits and pieces from this answer. Amaund's 'you need the AVD' was the last piece that gave me trouble.

That's easy. Follow the instructions at http://source.android.com/download for getting and compiling the source code for the whole android. That takes a while, but isn't that complicated.

By building that, you'll have you're output in the <android>/out directory. That includes, besides the ROM images, a bunch of tools too, including the emulator. My emulator is at <android>/out/host/linux-x86/bin/emulator. Just set an environment variable named ANDROID_PRODUCT_OUT to <android>/out/target/product/generic, and then running the emulator without any options will run your compiled ROM.

As of May 2012, I found that you can't use the 'goldfish_defconfig' for compiling the kernel. You need to use goldfish_armv7_defconfig'. This would explain why JonnyLambada's method of extracting the config from the emulator (for the prebuilt kernel) works, and is necessary.

The goldfish_defconfig configures the kernel to run on an ARM 926 processor, but the emulator is configured to run as a Coretex A8 (which is an ARM V7 CPU). So you need to use the newer defconfig if you want it to work (or pull the config from the emulator).

The way I was able to boot the AOSP rom I compiled was to copy the system.img that got compiled to ~/.android/avd/Froyo.avd/ But, when I extract the system.img and add the rooted version of su and busybox, then remake the system.img, the emulator does not boot. I'm still trying to figure that part out :S

Not the answer you're looking for? Browse other questions tagged android android-emulator emulation android-source or ask your own question.

0
How can I build a kernel for the Android Emulator?
1758
How do I clone a subdirectory only of a Git repository?
27
Running emulator after building Android from source
30
How does native android code written for ARM run on x86?
31
Process system isn't responding in android emulator
21
AOSP repo sync takes too long
18
How do you create a loadable kernel module for Android?
22
Run custom ROM on Android Emulator
14
how to reboot the emulator into recovery mode
13
How to modify Android emulator source code
See more linked questions

2805
How can I save an activity state using the save instance state?
1150
Fling gesture detection on grid layout
4191
How to close/hide the Android soft keyboard programmatically?
1230
Is quitting an application frowned upon?
800
How do you install an APK file in the Android emulator?
1480
How can you get the build/version number of your Android application?
1150
You need to use a Theme.AppCompat theme (or descendant) with this activity
448
Android emulator not able to access the internet