How can I search for a commit message on GitHub?

Not in a Git repository, but rather in GitHub specifically - how do I search just the commit messages of a specific repository/branch?

As of 2017 it's a functionality included in GitHub itself.

The example search used by them is repo:torvalds/linux merge:false crypto policy

You used to be able to do this, but GitHub removed this feature at some point mid-2013. To achieve this locally, you can do:

(Use the -g flag if you want to search other branches and dangling commits.)

GitHub has published an update that allows you now to search within commit messages from within their UI. See blog post for more information.

I had the same question and contacted someone GitHub yesterday:

Since they switched their search engine to Elasticsearch it's not possible to search for commit messages using the GitHub UI. But that feature is on the team's wishlist.

Unfortunately there's no release date for that function right now.

The short answer is, you cannot search commit messages directly on github.com the website. For the time being we recommend the local git grep solution others on this thread have proposed.

At one point in time GitHub did offer a git grep style search over commit messages for a single repository. Unfortunately, this approach exposed a denial of service that could render a file server inaccessible. For this reason, we removed git grep searching.

Current back-of-the envelope estimates puts the number of commits in GitHub somewhere around the 80 billion mark. Although Google engineers laugh behind our backs, this is a rather large number of documents to store in ElasticSearch. We'd love to make this dataset searchable, but it is not a trivial project.

This was removed from GitHub. I use:

You can also filter by author:

From the help page on searching code, it seems that this isn't yet possible.

You can search for text in your repository, including the ability to choose files or paths to search in, but you can't specify that you want to search in commits.

Maybe suggest this to them?

You can do this with repositories that have been crawled by Google (results vary from repository to repository).

Search all branches of all crawled repositories for "change license"

Search master branch of all crawled repositories for "change license":

Search all branches of twitter/some_project repository for "change license"

You can now search for commit messages! (still only in the master branch)

February 2015: Not sure that could ever be possible, considering the current search infrastructure base on Elasticsearch (introduced in January 2013).

As an answer "drawing from credible and/or official sources", here is an interview done with the GitHub people in charge of introducing Elasticsearch at GitHub (August 2013)

Tim Pease: We have two document types in there: One is a source code file and the other one is a repository. The way that git works is you have commits and you have a branch for each commit. Repository documents keep track of the most recent commit for that particular repository that has been indexed. When a user pushes a new commit up to Github, we then pull that repository document from elasticsearch. We then see the most recently indexed commit and then we get a list of all the files that had been modified, or added, or deleted between this recent push and what we have previously indexed. Then we can go ahead and just update those documents which have been changed. We don’t have to re-index the entire source code tree every time someone pushes.

Andrew Cholakian: So, you guys only index, I’m assuming, the master branch.

Tim Pease: Correct. It’s only the head of the master branch that you’re going to get in there and still that’s a lot of data, two billion documents, 30 terabytes.

Andrew Cholakian: That is awesomely huge.

Tim Pease: With indexing source code on push, it’s a self-healing process.
We have that repository document which keeps track of the last indexed commit. If we missed, just happen to miss three commits where those jobs fail, the next commit that comes in, we’re still looking at the diff between the previous commit that we indexed and the one that we’re seeing with this new push.
You do a git diff and you get all the files that have been updated, deleted, or added. You can just say, “Okay, we need to remove these files. We need to add these files, and all that.” It’s self-healing and that’s the approach that we have taken with pretty much all of the architecture.

That all means not all the branches of all the repo would be indexed with that approach.
A global commit message search isn't available for now.
And Tim Pease himself confirms commit messages are not indexed.

Note that it isn't impossible to get one's own elasticsearch local indexing of a local clone: see "Searching a git repository with ElasticSearch"

But for a specific repo, the easiest remains to clone it and do a:

(More options at "How to search a Git repository by commit message?")

Since this has been removed from GitHub, I've been using gitk on Linux to do this.

From terminal go to your repository and type gitk.

In the middle of the GUI, there's a search box. It provides a good selection of filters:

This works well from within Eclipse, until GitHub adds the feature: 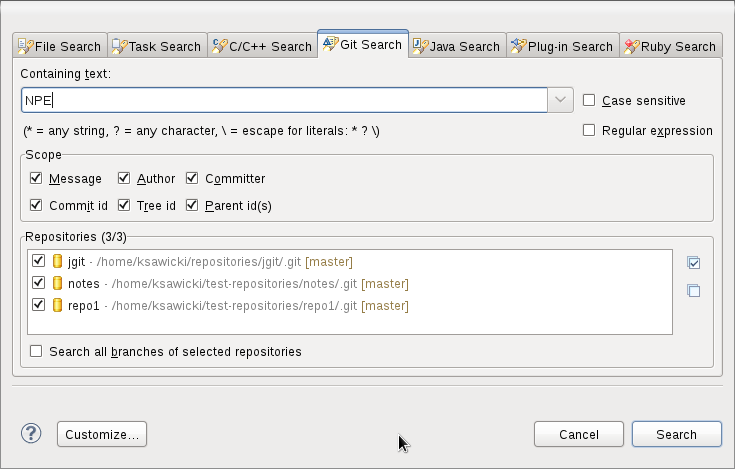 If you have a local version of the repository, you might want to try this crude shell script I wrote to open the GitHub pages for all commits matching your search term in new tabs in your default browser:

Just replace https://github.com/RepoOwnerUserName/RepoName/ with the actual GitHub URL of your repository, save the script somewhere (e.g. as githubsearch.sh, make it executable (chmod +x githubsearch.sh) and then add the following alias to your ~/.bashrc file:

Then, from anywhere in your Git repository, just do this at the terminal:

and any commits that match your (case insensitive) search term will have their corresponding GitHub pages opened in your browser. (Be warned that if your search term appears in hundreds of commits, this may well crash your browser and eat your PC's CPU for a while.)

As of mid-2019, just type whatever you want to search for in the top left search box and then click "Commits." 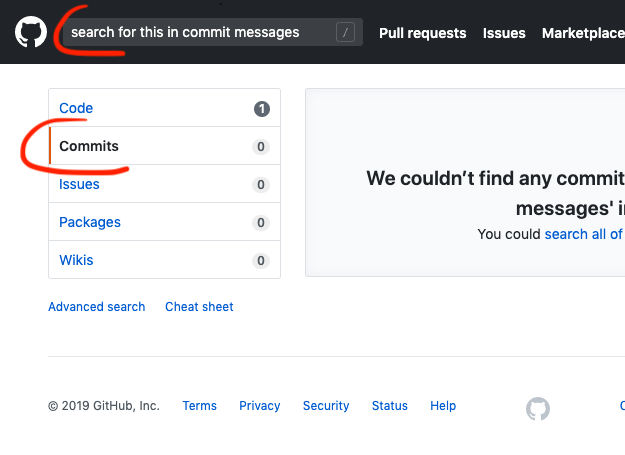 Not the answer you're looking for? Browse other questions tagged search github or ask your own question.

833
How to search a Git repository by commit message?
273
Search code inside a Github project
287
Find a commit on GitHub given the commit hash
219
How to search on github to get exact matches (like what quotes do for Google)
88
Searching code in a specific GitHub branch
15
“Don't run bundler as root” - what is the exact difference made by using root?
10
Searching a github repo using regular expressions
1
How to compile qtwebkit plugins?
0
how do I get all my recent commit messages from github?
2
Search for commits on a branch other than master branch in github
See more linked questions

4126
How can I determine the URL that a local Git repository was originally cloned from?
1868
Is there a way to cache GitHub credentials for pushing commits?
1951
How can I delete all Git branches which have been merged?
1248
How to remove a directory from git repository?
1447
Git push requires username and password
1114
Download a single folder or directory from a GitHub repo
3647
How do I update a GitHub forked repository?
672
Make the current commit the only (initial) commit in a Git repository?
1884
Add images to README.md on GitHub