I was trying to solve the following problem:

I came up with the following brute force solution (pseudo code):

This is a very brute force solution. One of the optimizations I used was to one scan one quadrant instead of looking at four. Another one was to ignore the points that we've already seen before.

However, looking at the final points, I was trying to find a pattern, perhaps a mathematical solution or a different approach that would be better than what I came up.

PS: If you want, I can post the data somewhere. It is interesting to look at it with any one of the axis sorted. 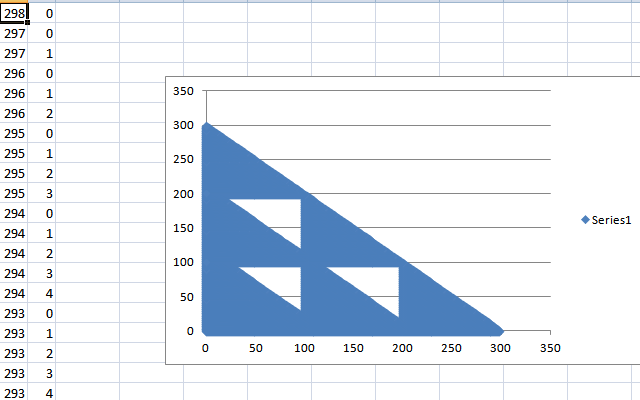 Here's what the whole grid looks like as an image: 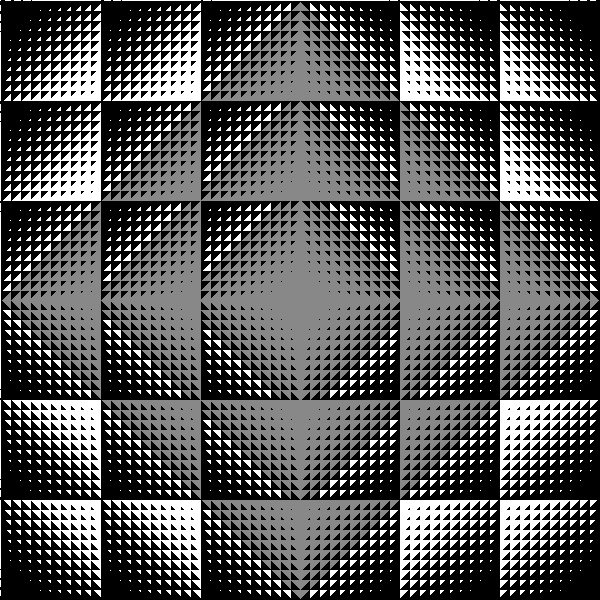 The black squares are inaccessible, white accessible, gray accessible and reachable by movement from the center. There's a 600x600 bounding box of black because the digits of 299 add to 20, so we only have to consider that.

This exercise is basically a "flood fill", with a shape which is just about the worst case possible for a flood fill. You can do the symmetry speedup if you like, though that's not really where the meat of the issue is--my solution runs in 160 ms without it (under 50ms with it).

The big speed wins are (1) do a line-filling flood so you don't have to put every point on the stack, and (2) manage your own stack instead of doing recursion. I built my stack as two dynamically-allocated vectors of ints (for x and y), and they grow to about 16k, so building whole stack frames that deep would definitely be a huge loss.

Without looking for the ideal solution I had something similar. For each point the monkey is, I added the next 4 possibilities to a list and did the same for the next four recursively only if they had not been visited. This can be also done with multiprocessing to speed up the process.

I'm not sure how different this may be from brainydexter's idea... roaming the one quadrant, I instituted a single array hash (index = 299 * y + x) and built the result with another array, each index storing only the points that expand from its previous index, for example:

On an old IBM Thinkpad in JavaScript, the speed seemed to vary from 35-120 milliseconds (fiddle here).

Not the answer you're looking for? Browse other questions tagged algorithm or ask your own question.

1546
What is the best algorithm for overriding GetHashCode?
1206
Easy interview question got harder: given numbers 1..100, find the missing number(s) given exactly k are missing
1182
Removing duplicates in lists
3
Minimum manhattan distance with certain blocked points
1976
What is the optimal algorithm for the game 2048?
0
GridWalk CodeEval implementation issue
0
Number of distinct triangle vertices
1
How to yield coordinate pairs from a start point to an end point?
2
Dynamic Programming Problem: Maximum Accessible Area On A 2D Grid