Obviously, when assigning person1 to person2 and the Name property of person2 is changed, the Name of person1 will also be changed. person1 and person2 have the same reference.

Why is it that when person2 = null, the person1 variable will not be null either?

Both person and person2 are references, to the same object. But these are different references. So when you are running

I guess the best way to explain this is with a simplified illustration. Here is how the situation looked like before person2 = null:

And here is the picture after the null assignment: 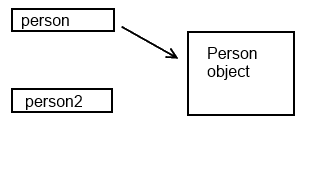 As you can see, on the second picture person2 references nothing (or null, strictly speaking, since reference nothing and reference to null are different conditions, see comment by Rune FS), while person still references an existing object.

You may read: Value vs Reference Types from Joseph Albahari

With reference types, however, an object is created in memory, and then handled through a separate reference—rather like a pointer.

I will try to depict the same concept using the following diagram. 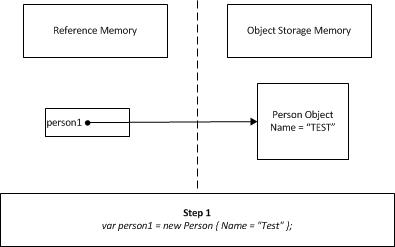 Created a new object of type person and the person1 reference (pointer) is pointing to the memory location in storage. 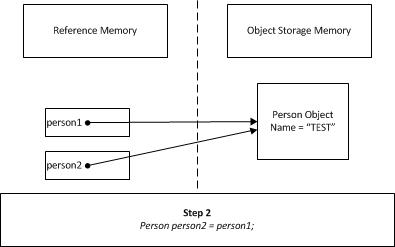 Created a new reference(pointer) person2 which is pointing to the same in storage. 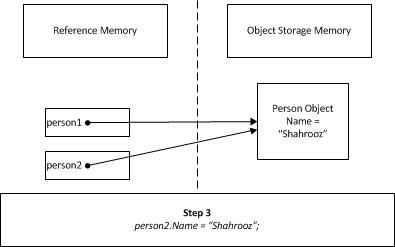 Changed the object property Name to new value, through person2 since both references are pointing to the same object,Console.WriteLine(person1.Name); outputs Shahrooz. 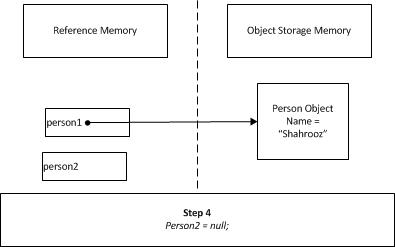 After assigning null to person2 reference, it will be pointing to nothing, but person1 is still holding the reference to the object.

You have changed person2 to reference null, but person1 isn't referencing there.

What I mean is that if we look at person2 and person1 before the assignment then both reference the same object. Then you assign person2 = null, so person 2 is now referencing a different type. It did not delete the object that person2 was referenced to.

I've created this gif to illustrate it:

Because you've set the reference to null.

When you set a reference to null, the reference itself is null.. not the object it references.

But when you set person2 to null, you make person2 into a null pointer, so that is does not point to the same object as person anymore. It wont do anything to the object itself to destroy it, and since person still points/references the object it wont get killed by garbage collection either.

If you also set person = null, and you have no other references to the object, it will eventually be removed by the garbage collector.

person1 and person2 point to the same memory address. When you null person2, you null the reference, not the memory address, so person1 continues reffering to that memory address, that's the reason. If you change the Classs Person into a Struct, the behaviour will change.

I find it most helpful to think of reference types as holding object IDs. If one has a variable of class type Car, the statement myCar = new Car(); asks the system to create a new car and report its ID (let's say it's object #57); it then puts "object #57" into variable myCar. If one writes Car2 = myCar;, that writes "object #57" into variable Car2. If one writes car2.Color = blue;, that instructs the system to find the car identified by Car2 (e.g. object #57) and paint it blue.

The only operations which are performed directly on object ID's are creation of a new object and getting the ID, getting a "blank" id (i.e. null), copying an object ID to a variable or storage location that can hold it, checking whether two object IDs match (refer to the same object). All other requests ask the system to find the object referred to by an ID and act upon that object (without affecting the variable or other entity that held the ID).

In existing implementations of .NET, object variables are likely to hold pointers to objects stored on a garbage-collected heap, but that's an unhelpful implementation detail because there's a critical difference between an object reference and any other kind of pointer. A pointer is generally assumed to represent the location of something which will stay put long enough to be worked with. Object references don't. A piece of code may load the SI register with a reference to an object located at address 0x12345678, start using it, and then be interrupted while the garbage collector moves the object to address 0x23456789. That would sound like a disaster, but the garbage will examine the metadata associated with the code, observe that the code used SI to hold the address of the object it was using (i.e. 0x12345678), determine that object that was at 0x12345678 had been moved to 0x23456789, and update SI to hold 0x23456789 before it returned. Note that in that scenario, the numerical value stored in SI was changed by the garbage collector, but it referred to the same object before the move and afterward. If before the move it referred to the 23,592nd object created since program startup, it will continue to do so afterward. Interestingly, .NET does not store any unique and immutable identifier for most objects; given two snapshots of a program's memory, it will not always be possible to tell whether any particular object in the first snapshot exists in the second, or if all traces to it have been abandoned and a new object created that happens to look like it in all observable details.

person1 and person2 are two separate references on the stack that point to the same Person object on the heap.

Once all references to the Person object are removed, then eventually the Garbage Collector will removed the object from memory.

Note that you can get value semantics by changing to a struct.

Assigning to person2 as in:

3
string by value .net?
0
C# assign property by reference
0
C# Object Assignment
89
Why is this not throwing a NullPointerException?
3
Does C# dictionary store only the reference of the object or the full copy of the object which is added as key?
6
When I change the value of a variable which is a copy of another, it changes the original variable also
2
What exactly is a reference in C#
1
C# objects and memory managment
1
Initialize multiple List<Boolean> vs multiple List<String>
-2
C# new variable or reference?
See more linked questions

2166
How do I calculate someone's age based on a DateTime type birthday?
878
How to create a new object instance from a Type
3763
What are the differences between a pointer variable and a reference variable?
2
Can not round trip html format to clipboard
659
Func delegate with no return type
1792
Type Checking: typeof, GetType, or is?
6
Using IErrorHandler and TCP Message Security causes a timeout
1650
Why not inherit from List<T>?
0
Make Autofac resolve non-public constructors