App Icon not showing up, although I have added in Xcode 5

I have added the icon as shown in the pic below but I am still not seeing the icon in my device or simulator.

This might be an XCode 5 bug that the added icons are not actually included in the app bundle, but you can work around it by going to Build Phases, expand Copy Bundle Resources, then press the "+" sign in the bottom to manually add the icon files to this category.

In addition iOS 5/6 seems to have a bug that the screen doesn't update the app icon even if the icon files are included in the bundle. To work around it (as suggested by josema.vitaminew at App Icon not changing when app version is updated in iOS 5 simulator) you can drag the app icon into a folder, then iOS will update the appearance of it.

If using the Asset Catalog, it might be worth also checking whether Images.xcassets holds all your targets as shown in the below image.

Expanding on adp's answer, if anyone has switched to asset catalogs but they stopped working, and still can't find a solution for Asset Catalog, Images.xcassets, AppIcon or LaunchImage not working, here is a reproduction of the same problem I encountered, and the solution:

I had upgraded to Xcode 6 and opened a project created by an earlier version (4 or 5, not sure) and no matter what I did, AppIcons and LaunchImages absolutely would show up when I ran the app in either iOS Simulator or the device.

So the problem appears to be with how Xcode stores Images.xcassets inside the project, and not with target membership, derived data, or anything in Images.xcassets itself. You must remove your assets file and create a fresh one, then drag images to wells by hand again.

It took me 3 hours of research to solve something that should have "just worked" and the entire process of having to manually create individually sized art assets has been so tedious over the years that it has personally cost me countless hours of busywork.

Hopefully this bug workaround helps someone avoid the frustration I went through. I can't help with the friction of manually sizing art assets, but I highly recommend the Icon Slayer website to automate that (of which I have no affiliation).

I have encountered the same problem when the project is switching from xcode5 to xcode6 . The solution is just click on the icon in the image asset,open the right panel , just tick the iOS version option in the panel,add the icons that are blank run it again ... It worked for me 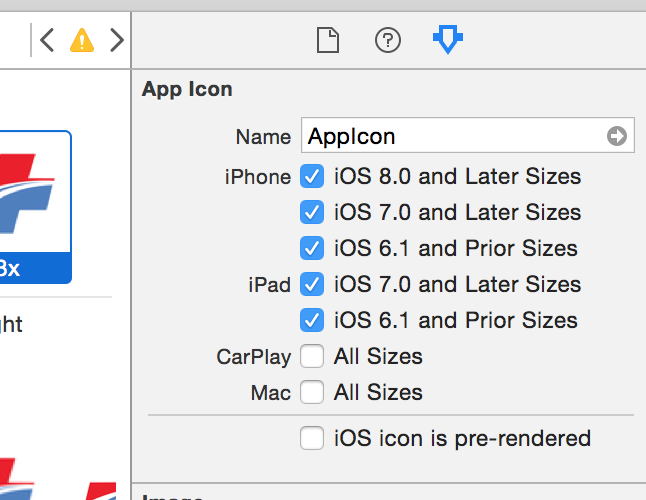 I want to add my solution, where the problem is only isolated to the iPad, my app icon will not show only for iPads. After trying all the solution above, and I looked in the info.plist and found this flag that was not there before the problem with iPads. A new key/value has been added called "CFBundleIcons~ipad" without my knowledge and had nothing as it's value. Removing the key helped resolve my issue.

According to Apple Docs, the icons must be placed on the root level of the app files.

IOS/Xcode will not go under directories to search your image.

Solution is to move the images onto the root of your application i.e. where your source files are, or you can create references in the same way.

In my case, I just needed to clean and rebuild my project.

I had the same problem and after a couple of hours finally I could resolved it, copying an old -info.plist from one of my backups project and replace it, this works fine for me. Regards

My issue ended up being I had used jpg images, rather than pngs.

For me, it was a much simpler solution than the others listed here. I had simply got the assets the wrong size. I had not paid attention to the multipliers that are necessary (e.g. 2x or 3x) and therefore the build was generating a warning for the incorrect asset sizes (which I had ignored). In my case, I corrected the image sizes and voila they appeared in the simulator.

For a macOS/OSX application, you also need to always add a 128 pixel size (and 2x), you can not only use a 512 pixel size and expect it to size down.

If your app icon has any transparency then it won't work. Check it!

I had all the images in the relevant folders and when I right clicked on the empty icon image in Images.xcassets/AppIcon and chose show in finder it would find the image correctly and show it, but for whatever reason it wasn't adding correctly to the project.

After trying a lot of different things above I simply dragged the images from finder into the AppIcon area and it worked.

If you are using cocoapods be sure to check this answer from a related question. After many lost hours, this is what fixed it for me.

In my case, I updated Build Rules > Using > to "Asset Catalog Compiler" instead of any custom script and it worked for me.

Not the answer you're looking for? Browse other questions tagged ios xcode icons or ask your own question.

1046
How to change the name of an iOS app?
1745
How can I make a UITextField move up when the keyboard is present - on starting to edit?
878
How to check iOS version?
480
Is it possible to disable the network in iOS Simulator?
677
How to add a browser tab icon (favicon) for a website?
612
iOS app with framework crashed on device, dyld: Library not loaded, Xcode 6 Beta
724
Xcode 6: Keyboard does not show up in simulator
472
Capture iOS Simulator video for App Preview
781
Xcode process launch failed: Security
891
Xcode error “Could not find Developer Disk Image”