How do I open the Git GUI from a command window?

How do I open the Git GUI from a command window? I'm using Windows 7. I've tried running this:

but that's not a windows script. When I right-click on a folder, I see an option that says, "Git GUI Here". When I click on that, the Git GUI opens up. I want to do the same thing from a command line.

Looks like you installed Git in C:\Apps, so in your case the exact command will be:

Generally, assuming installation in a default location, this is the call:

Note that this answer applies to those who selected to not include git in the PATH variable during the installation process (on the screen below). If you selected the second option, then the other answer on this page (to just run "git gui") is the easier way to get to the UI from the command line. 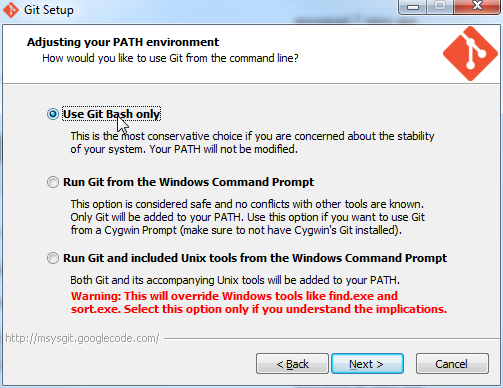 With 64 bit Git installed in the default location on a 64 bit Windows 10 machine, you can use the following line:

If you want the Git Gui to run in the current directory, then you don't need the "--working-dir" "<path to your Git working directory>".

However, using the above mingw64\bin\wish.exe line results in some issues if Git is configured to use SSH. To have it working properly, it is necessary to change directory to the desired working directory and start git-gui.exe:

There is an executable that opens UI, located by default here:

and in your case, apparently, here:

The UI can also be invoked by running generic git.exe from bin or cmd subfolders with parameter gui and with additional parameters

as described in the documentation.

Not the answer you're looking for? Browse other questions tagged git windows-7 command-line git-gui or ask your own question.