How to shorten my conditional statements

I have a very long conditional statement like the following:

I was wondering if I could refactor this expression/statement into a more concise form.

Any idea on how to achieve this?

Put your values into an array, and check if your item is in the array:

If a browser you support doesn't have the Array#includes method, you can use this polyfill.

Short explanation of the ~ tilde shortcut:

Update: Since we now have the includes method, there's no point in using the ~ hack anymore. Just keeping this here for people that are interested in knowing how it works and/or have encountered it in other's code.

Instead of checking if the result of indexOf is >= 0, there is a nice little shortcut:

Here is the fiddle: http://jsfiddle.net/HYJvK/

How does this work? If an item is found in the array, indexOf returns its index. If the item was not found, it'll return -1. Without getting into too much detail, the ~ is a bitwise NOT operator, which will return 0 only for -1.

I like using the ~ shortcut, since it's more succinct than doing a comparison on the return value. I wish JavaScript would have an in_array function that returns a Boolean directly (similar to PHP), but that's just wishful thinking (Update: it now does. It's called includes. See above). Note that jQuery's inArray, while sharing PHP's method signature, actually mimics the native indexOf functionality (which is useful in different cases, if the index is what you're truly after).

Important note: Using the tilde shortcut seems to be swathed in controversy, as some vehemently believe that the code is not clear enough and should be avoided at all costs (see the comments on this answer). If you share their sentiment, you should stick to the .indexOf(...) >= 0 solution.

Integers in JavaScript are signed, which means that the left-most bit is reserved as the sign bit; a flag to indicate whether the number is positive or negative, with a 1 being negative.

Here are some sample positive numbers in 32-bit binary format:

Now here are those same numbers, but negative:

To understand this, let's do some simple binary arithmetic.

How do we get those results? By doing regular addition, the way we were taught in school: you start at the right-most column, and you add up all the rows. If the sum is greater than the greatest single-digit number (which in decimal is 9, but in binary is 1) we carry the remainder over to the next column.

Now, as you'll notice, when adding a negative number to its positive number, the right-most column that is not all 0s will always have two 1s, which when added together will result in 2. The binary representation of two being 10, we carry the 1 to the next column, and put a 0 for the result in the first column. All other columns to the left have only one row with a 1, so the 1 carried over from the previous column will again add up to 2, which will then carry over... This process repeats itself till we get to the left-most column, where the 1 to be carried over has nowhere to go, so it overflows and gets lost, and we're left with 0s all across.

This system is called 2's Complement. You can read more about this here:

Now that the crash course in 2's complement is over, you'll notice that -1 is the only number whose binary representation is 1's all across.

Using the ~ bitwise NOT operator, all the bits in a given number are inverted. The only way to get 0 back from inverting all the bits is if we started out with 1's all across.

You can use switch statement with fall thru:

Using Science: you should do what idfah said and this for fastest speed while keep code short:

THIS IS FASTER THAN ~ Method 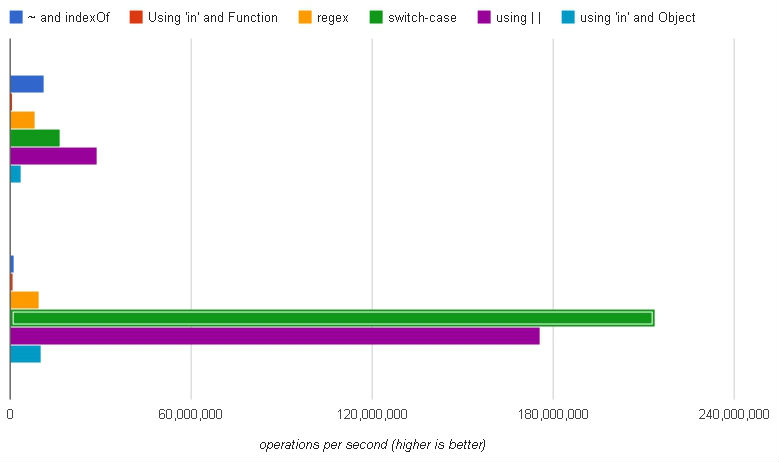 If possibilities are few and you know that certain ones are more likely to occur than you get maximum performance out if || ,switch fall through , and if(obj[keyval]).

If possibilities are many, and anyone of them could be the most occurring one, in other words, you can't know that which one is most likely to occur than you get most performance out of object lookup if(obj[keyval]) and regex if that fits.

i'll update if something new comes up.

If you are comparing to strings and there is a pattern, consider using regular expressions.

Otherwise, I suspect attempting to shorten it will just obfuscate your code. Consider simply wrapping the lines to make it pretty.

Using an object as an associative array is a pretty common thing, but since JavaScript doesn't have a native set you can use objects as cheap sets as well.

or if the items are not that uniform, then:

Excellent answers, but you could make the code far more readable by wrapping one of them in a function.

This is complex if statement, when you (or someone else) read the code in a years time, you will be scanning through to find the section to understand what is happening. A statement with this level of business logic will cause you to stumble for a few seconds at while you work out what you are testing. Where as code like this, will allow you to continue scanning.

Name your function explicitly so it immediately obvious what you are testing and your code will be much easier to scan and understand.

You could put all the answers into a Javascript Set and then just call .contains() on the set.

You still have to declare all the contents, but the inline call will be shorter.

One of my favorite ways of accomplishing this is with a library such as underscore.js...

another way or another awesome way i found is this...

of course as you can see this takes things one step further and make them easy follow logic.

if you must you could make it shorter.

and if you want to do inverse

Just use a switch statement instead of if statement:

For very long lists of strings, this idea would save a few characters (not saying I'd recommend it in real life, but it should work).

Choose a character that you know won't occur in your test.type, use it as a delimiter, stick them all into one long string and search that:

If your strings happen to be further constrained, you could even omit the delimiters...

...but you'd have to be careful of false positives in that case (e.g. "embite" would match in that version)

For readability create a function for the test (yes, a one line function):

I think there are 2 objectives when writing this kind of if condition.

As such sometimes #1 might be the fastest, but I'll take #2 for easy maintenance later on. Depending on the scenario I will often opt for a variation of Walter's answer.

To start I have a globally available function as part of my existing library.

and then when I actually want to run an if condition similar to yours I'd create an object with a list of the valid values:

It isn't as quick as a switch/case statement and a bit more verbose than some of the other examples but I often get re-use of the object elsewhere in the code which can be quite handy.

Piggybacking on one of the jsperf samples made above I added this test and a variation to compare speeds. http://jsperf.com/if-statements-test-techsin/6 The most interesting thing I noted is that certain test combos in Firefox are much quicker than even Chrome.

This can be solved with a simple for loop:

We use the first section of the for loop to initialize the arguments you wish to match, the second section to stop the for loop from running, and the third section to cause the loop to eventually exit.

Not the answer you're looking for? Browse other questions tagged javascript if-statement or ask your own question.

0
Multiple conditions in IF statements
-2
Is there a way in javascript to avoid repeating the same variable in a logic expression?
7418
How to check whether a string contains a substring in JavaScript?
96
How does !!~ (not not tilde/bang bang tilde) alter the result of a 'contains/included' Array method call?
133
Javascript - remove an array item by value
41
Multiple conditions in an if clause
17
Integers in JavaScript
6
Javascript formatting for if condition
2
Optimize OR in IF
45
What does `!!~` mean in javascript?
See more linked questions

7627
How do JavaScript closures work?
8134
How do I check if an element is hidden in jQuery?
6682
How do I remove a property from a JavaScript object?
1517
How do you access the matched groups in a JavaScript regular expression?
7710
How do I redirect to another webpage?
7914
What does “use strict” do in JavaScript, and what is the reasoning behind it?
7418
How to check whether a string contains a substring in JavaScript?
2194
How to decide when to use Node.js?
9643
How can I remove a specific item from an array?
1546
Loop inside React JSX