The primary reference could not be resolved because it was built against a higher version of the .NET framework than the currently targeted framework

I am trying to build a project that references a 3rd party SlingshotClient.dll. The project builds fine on other developers workstations. However, I am getting the error below. One difference that I could imagine is contributing to my issue is that I also have VS 2012 and .NET Frameworks 4.5 installed on my machine. I believe the other developers that can build this successfully, don't have those installed.

C:\Windows\Microsoft.NET\Framework\v4.0.30319\Microsoft.Common.targets(1578,5): warning MSB3274: The primary reference "SlingshotClient, Version=1.0.0.0, Culture=neutral, PublicKeyToken=bb5a8745472e181a, processorArchitecture=MSIL" could not be resolved because it was built against the ".NETFramework,Version=v4.5" framework. This is a higher versio n than the currently targeted framework ".NETFramework,Version=v4.0". 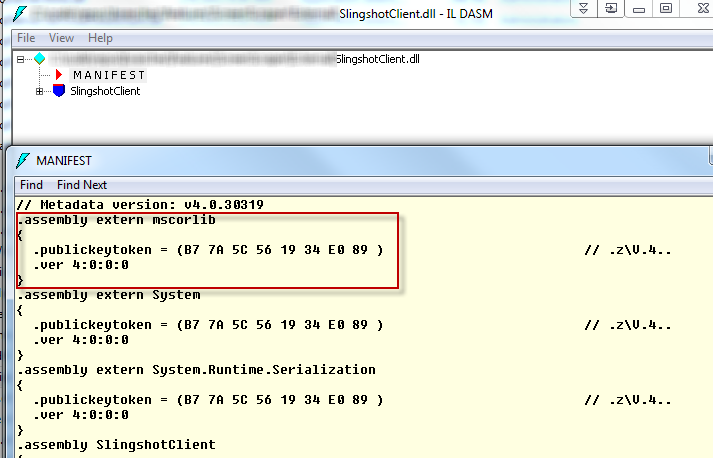 Apparently if you have only .NET Frameworks 4.0 installed, you can add as a reference a .NET assembly that targets 4.5 to a project that targets .NET 4.0. This will compile and run with no errors.

As soon as you install .NET Frameworks 4.5, compile will fail. The solution is to target your project for .NET Framework 4.5 or get a version of the referenced assembly that targets .NET 4.0.

Not the answer you're looking for? Browse other questions tagged .net visual-studio-2010 .net-4.0 build or ask your own question.

98
.NET 4.0 build issues on CI server
9
MSBUILD 4.0 Fails on AJAX Extensions
230
Could not load file or assembly or one of its dependencies
2
Primary reference can't be resolved - dlls' that target different versions of .NET
11
Upgrade to .Net 4.5 causes assembly to fail?
4
DocumentFormat.OpenXml 2.5 in .NET 3.5.1 gives warnings
0
Could not install package 'Google.Apis.Core 1.13.1', Unable to uninstall 'Microsoft.Bcl.Build 1.0.21'
1
ReportViewer 14: “The primary reference […] could not be resolved” while targeting .NET Framework 4.0
0
Visual studio shows Error while connecting to MySQL