As a preface: this is my first question - I've tried my best to make it as clear as possible, but I apologise if it doesn't meet the required standards.

As part of a summer project, I am taking time-lapse images of an internal melt figure growing inside a crystal of ice. For each of these images I would like to measure the perimeter of, and area enclosed by the figure formed. Linked below is an example of one of my images: 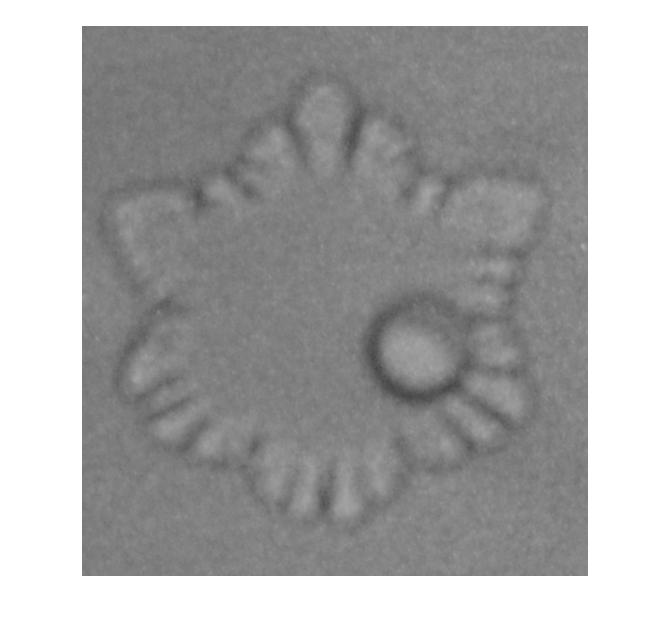 The method that I'm trying to use is the following:

This is the code that I am using:

It is at this stage that I am struggling. The edges do not quite join, no matter how much I play around with the morphological structuring element. Perhaps there is a better way to complete the edges? Linked is an example of the figure this code outputs: 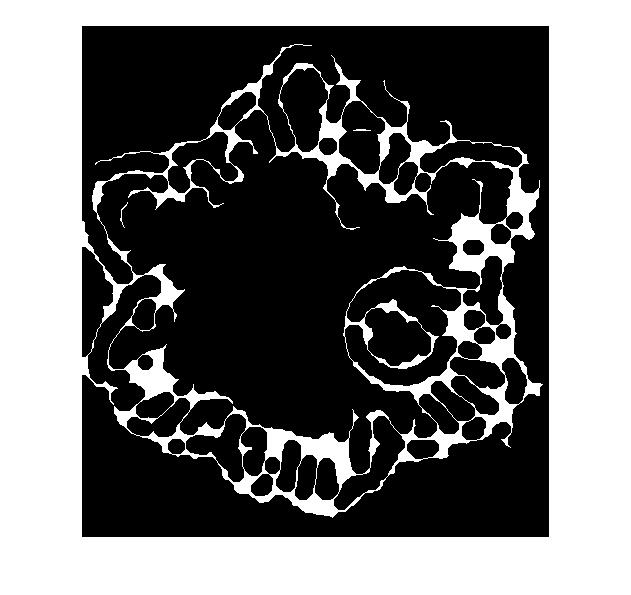 The reason that I am trying to join the edges is so that I can fill the perimeter with white pixels and then use regionprops to output the area. I have tried using the imfill command, but cannot seem to fill the outline as there are a large number of dark regions to be filled within the perimeter.

Is there a better way to get the area of one of these melt figures that is more appropriate in this case?

As background research: I can make this method work for a simple image consisting of a black circle on a white background using the below code. However I don't know how edit it to handle more complex images with edges that are less well defined.

You might want to consider Active Contours. This will give you a continous boundary of the object rather than patchy edges.

Below are links to

and some Matlab code on the File Exchange: http://www.mathworks.co.uk/matlabcentral/fileexchange/28149-snake-active-contour

and a link to a description on how to implement it: http://www.cb.uu.se/~cris/blog/index.php/archives/217

Using the implementation on the File Exchange, you can get something like this:

I think you might have room to improve the effect of edge detection in addition to the morphological transformations, for instance the following resulted in what appeared to me a relatively satisfactory perimeter.

In addition I used bwfill interactively to fill in most of the interior. It should be possible to fill the interior programatically but I did not pursue this.

This was the result I obtained 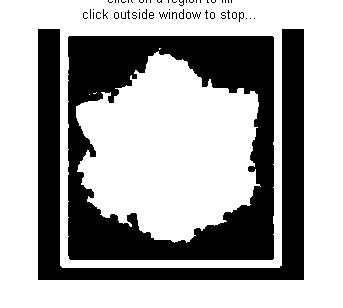 The "fractal" properties of the perimeter may be of importance to you however. Perhaps you want to retain the folds in your shape.

If the end result is an area/diameter estimate, then why not try to find maximal and minimal shapes that fit in the outline and then use the shapes' area to estimate the total area. For instance, compute a minimal circle around the edge set then a maximal circle inside the edges. Then you could use these to estimate diameter and area of the actual shape.

The advantage is that your bounding shapes can be fit in a way that minimizes error (unbounded edges) while optimizing size either up or down for the inner and outer shape, respectively.

Not the answer you're looking for? Browse other questions tagged matlab image-processing or ask your own question.

160
image processing to improve tesseract OCR accuracy
1744
Image Processing: Algorithm Improvement for 'Coca-Cola Can' Recognition
5
Crop image after selecting area using edge detection in android
0
How to calculate the area of a lake using binary image?
5
“Cut out” an image based on edge detection
12
How to detect edge and crop an image in Python
0
How to change color of edge in MATLAB?
2
Python edge detection of low contrast image