I get this error when trying to access localhost via a browser.

Here is my configuration file:

If you are using Apache 2.4

You have to check allow and deny rules

In 2.2, access control based on client hostname, IP address, and other characteristics of client requests was done using the directives Order, Allow, Deny, and Satisfy.

In 2.4, such access control is done in the same way as other authorization checks, using the new module mod_authz_host.

The new directive is Require: 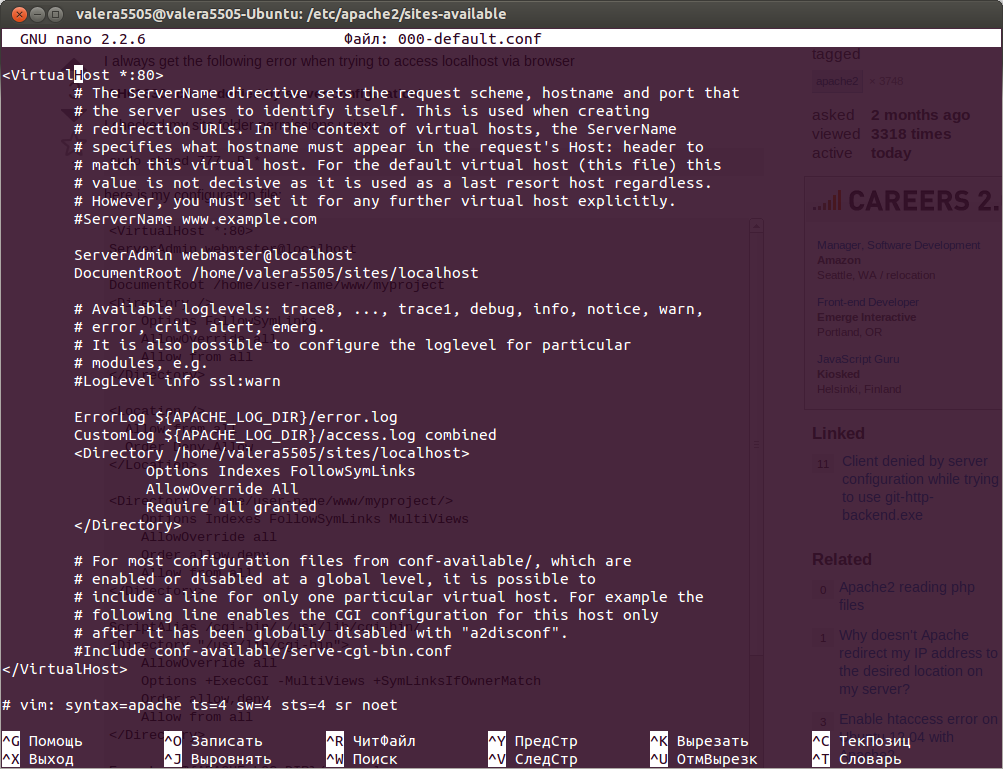 If the above doesn't work then also remove this below mentioned line:

Double check that the DocumentRoot path is correct. That can cause this error.

I made the same changes that ravisorg suggested to OSX 10.10 Yosemite that upgrades Apache to version 2.4. Below are the changes that were added to http.conf.

This drove me absolutely nuts for a day and a half but I found a solution if all other solutions have been tried unsuccessfully.

This is for macOS.

At that point I immediately stopped getting 403 errors and everything started working as expected. Weird thing is i didn't even have to restart apache it just worked, i guess it restarted itself when i went to my localhost, I honestly don't know but I guess the problem is Apache not actually restarting when using apachectl restart, or stop or start. Hope this helps someone.

The problem is in VirtualHost but probablely is not

Confirm your config is correct,here is correct sample

I got resolved my self after spending couple of hours.

I installed Apache/2.4.7 (Ubuntu) through coookbook in vagrant vm.

/etc/apache2/apache2.conf file does not have <VirtualHost *:80> element by default.

I did two changes to get it done

then finally I just booted vm..

Has anyone thought about that wamp server default not include the httpd-vhosts.conf file. My approach is to remove the note below

in httpd.conf file. That is all.

i'm using macOS Mojave (Apache/2.4.34). There was an issue in virtual host settings at /etc/apache2/extra/httpd-vhosts.conf file. after adding the required directory tag my problem was gone.

Hope the full virtual host setup structure will save you.

For me, all proposed solutions won't worked. This can help, if you use cgi, fastcig or fpm as proxy you have to add a location in your vhost to avoid this problem. This allows 404 to be passthrough proxy.

If you tail the error log and reload the page, you should see some more information as to the exact problem.

Grab the environment variables so ${APACHE_LOG_DIR} will actually work...

Then tail and watch...

If you are using Apache 2.4 in WampServer on windows OS.

You need to open https-vhosts.conf file in notepad.

If you unable to find above file. check screenshot below 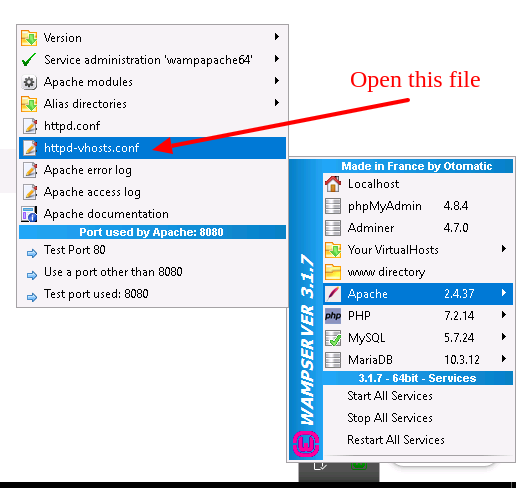 In above code Replace

And save it. Restart Apache service and try again.

For me, I had actually updated the Allow and Deny rules based on the 2.4 standard.

However, this was still causing me to receive the same AH01630 error. I found another thread and it suggested reinstalling apache2. Somehow this worked! If anyone cares to explain why, that would be helpful.

Credit to: AH01630: client denied by server configuration but require all granted is set (Apache 2.4, CentOs)

This was driving me crazy. Finally figured out what the problem was: I was using direct paths for the error log and they were wrong.

Why does Apache give a vague (and wrong) error message? Instead use a correct and useful error message like: Path for ErrorLog directive "/wrong/path/and/filename.log" is invalid.

When using Ubuntu check whether the CGI module is enabled. If not:

Ensure that any user-specific configs are included!

If none of the other answers on this page for you work, here's what I ran into after hours of floundering around.

I used user-specific configurations, with Sites specified as my UserDir in /private/etc/apache2/extra/httpd-userdir.conf. However, I was forbidden access to the endpoint http://localhost/~jwork/.

I could see in /var/log/apache2/error_log that access to /Users/jwork/Sites/ was being blocked. However, I was permitted to access the DocumentRoot, via http://localhost/. This suggested that I didn't have rights to view the ~jwork user. But as far as I could tell by ps aux | egrep '(apache|httpd)' and lsof -i :80, Apache was running for the jwork user, so something was clearly not write with my user configuration.

Given a user named jwork, here was my config file:

This config is perfectly valid. However, I found that my user config wasn't being included:

Note that this is the default path to the userdir conf file, but as you'll see below, it's configurable in httpd.conf. Ensure that the following lines are enabled:

For those who stuck at this error as me and nothing helped from above: check if problem folder from error.log actually exists on your server. Mine was generated automatically by Django in wrong place (was messed with static root, then manage.py collectstatic). Have no idea why one can not name errors correctly.

I actually solved this one by adding the directory access to the :80 entry.

Before everyone gets all 'security' on me, under my specific circumstances this is not a security issue.

If you are using a remote resource, I'd recommend instead make sure your CURL request goes via HTTPS / TLS, then this directory entry goes on the 443 port.

If you have https host then don't forget to make Require all granted changes for ssl config too.

Also, sometimes it's useful to check permissions as the apache user:

For Wamp 3 (Apache 2.4), besides putting the server online as described in the other answers, in the Virtual Hosts file conf/extra/httpd-vhosts.conf
you might need to replace

This is applicable if in httpd.conf you have

Because this thread is the first thing that pops up when searching for the error mentioned I would like to add another possible cause for this error: you may have mod_evasive active and the client seeing this error simply has crossed the limits configured in your mod_evasive.conf

This is especially a cause worth investigating if you are suddenly getting this error for a client that had no problems before and nothing else has changed.

(if mod_evasive is the cause then the error will go away by itself if the client just temporarily stops trying to access the site; however it may be a sign that you have configured too tight limits)

Beside missing Order and Allow directives mentioned in other answers be aware that a non-matching regular expression of a DirectoryMatch directive may also cause this error.

One obscure (having just dealt with it), yet possible, cause of this is an internal mod_rewrite rule, in the main config file (not .htaccess) that writes to a path which exists at the root of the server file system. Say you have a /media directory in your site, and you rewrite something like this:

If you have a /media directory at the root of your server, the rewrite will be attempted to that (resulting in the access denied error) rather than the one in your site directory, since the file system root is checked first by mod_rewrite, for the existence of the first directory in the path, before your site directory.

The problem may be that directive is not under < Directory>

The directive can be referenced within a < Directory>, < Files>, or < Location> section as well as .htaccess files to control access to particular parts of the server. Access can be controlled based on the client hostname or IP address.

I got another one that may be useful to someone. Was receiving the same error message after upgrading from PHP 5.6 => 7.0. We had changed the PHP upload settings, and forgot to change once copied over. Even though i wasn't uploading images at the time, Silverstripe (our CMS) was refusing to save and throwing that error. Increased the image upload size and it worked straight away.

In case this helps anyone Googling around like I was, I had this error message trying to access a SVG file on my server, e.g. https://example.com/images/file.svg. Other file types seemed fine, just SVG were failing.

I hunted around /etc/httpd conf files and checked every require all denied type of configuration, and just could not find what config was having this effect.

I turned LogLevel to debug in the VirtualHost config and could see the mod_authz_core logging specifying there was a 'Require all denied' in effect:

Through blind testing I moved the file to the root of the web root, and found I could then access it at https://example.com/file.svg .. so it only failed in the 'images' folder. This led me to an .htaccess file in the images folder that I had no idea was there.

Turns out Zen Cart 1.5 comes with an images/.htaccess file that has:

This was very annoying and I hope this might remind others to check .htaccess files at every level of the file system leading to the file you're having trouble accessing in case there is this kind of tom foolery going on.

This "bug" is actually the new normal behavior of Apache 2.4. In my case, I had a very specific rule to deny access to any folder or file with name starting with ".", so I had to set an exception for a particular public folder that requires such odd name.

For the record my particular Rewrite rule is:

This rule [F]obits everything starting with "." but .trusted, thanks to the magic of regex "?!" negation.

Get solution for the issue, need to change in apache2.conf file after that it will works, old code in /etc/apache2/apache2.conf

after that, In order for Apache to understand rewrite rules, we first need to activate mod_rewrite. It's already installed, but it's disabled on a default Apache installation. Use the a2enmod command to enable the module:

it works for me finally.

It took me some fiddling to get this to work on my own FreeBSD server running..

.. but eventually I came up with a working VirtualHost:

Not the answer you're looking for? Browse other questions tagged server apache2 apache2.4 or ask your own question.

1
Apache 2 on VM *sometimes* not finding mods-enabled directory
1226
Using Node.js as a simple web server
0
How to configure apache to work with FE and BE on same machine?
1
Perl/CGI not working for /home/user/cgi but working for /var/www/cgi-bin
1
403 Forbidden after changing DocumentRoot