RabbitMQ and relationship between channel and connection

The RabbitMQ Java client has the following concepts:

I'm trying to understand the relationship, and more importantly, the associations between them.

A good conceptual understanding of what the AMQP protocol does "under the hood" is useful here. I would offer that the documentation and API that AMQP 0.9.1 chose to deploy makes this particularly confusing, so the question itself is one which many people have to wrestle with.

A connection is the physical negotiated TCP socket with the AMQP server. Properly-implemented clients will have one of these per application, thread-safe, sharable among threads.

A channel is a single application session on the connection. A thread will have one or more of these sessions. AMQP architecture 0.9.1 is that these are not to be shared among threads, and should be closed/destroyed when the thread that created it is finished with it. They are also closed by the server when various protocol violations occur.

A consumer is a virtual construct that represents the presence of a "mailbox" on a particular channel. The use of a consumer tells the broker to push messages from a particular queue to that channel endpoint.

First, as others have correctly pointed out, a connection is the object that represents the actual TCP connection to the server. Connections are specified at the protocol level in AMQP, and all communication with the broker happens over one or more connections.

A Channel is the application session that is opened for each piece of your app to communicate with the RabbitMQ broker. It operates over a single connection, and represents a session with the broker.

A consumer is an object defined by the AMQP protocol. It is neither a channel nor a connection, instead being something that your particular application uses as a "mailbox" of sorts to drop messages.

In terms of what you mean by consumer thread pool, I suspect that Java client is doing something similar to what I programmed my client to do (mine was based off the .Net client, but heavily modified).

I found this article which explains all aspects of the AMQP model, of which, channel is one. I found it very helpful in rounding out my understanding

Some applications need multiple connections to an AMQP broker. However, it is undesirable to keep many TCP connections open at the same time because doing so consumes system resources and makes it more difficult to configure firewalls. AMQP 0-9-1 connections are multiplexed with channels that can be thought of as "lightweight connections that share a single TCP connection".

For applications that use multiple threads/processes for processing, it is very common to open a new channel per thread/process and not share channels between them.

Communication on a particular channel is completely separate from communication on another channel, therefore every AMQP method also carries a channel number that clients use to figure out which channel the method is for (and thus, which event handler needs to be invoked, for example).

There is a relation between like A TCP connection can have multiple Channels.

Channel: It is a virtual connection inside a connection. When publishing or consuming messages from a queue - it's all done over a channel Whereas Connection: It is a TCP connection between your application and the RabbitMQ broker.

In multi-threading architecture, you may need a separate connection per thread. That may lead to underutilization of TCP connection, also it adds overhead to the operating system to establish as many TCP connections it requires during the peak time of the network. The performance of the system could be drastically reduced. This is where the channel comes handy, it creates virtual connections inside a TCP connection. It straightaway reduces the overhead of the OS, also it allows us to perform asynchronous operations in a more faster, reliable and simultaneously way. 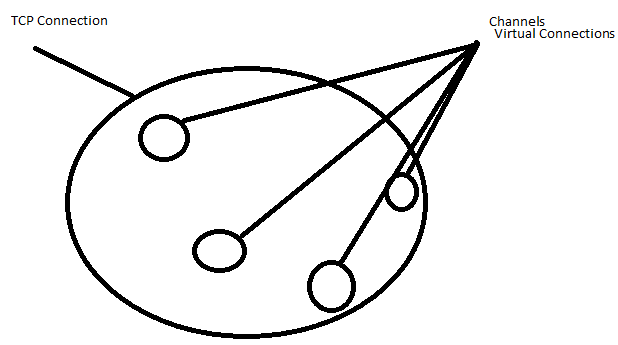 13
How can I pool channels in rabbitmq?
2
What is the difference between channels and links in AMQP?
4
How to synchronize consumers with rabbitmq
5
One channel - one queue in RabbitMQ?
2
How to publish messages to rabbitmq with high tps, multithreading
2
Can RabbitMQ cluster be used as a single endpoint by application?
2
rabbitmq handling lots of consumers, connections vs channels
0
RabbitMq Acks / Republishing
0
Prevent creating multiple connections in RabbitMQ while using RabbitMQ Bundle for the Symfony2
1
RabbitMq Unacknowledged Messages after Consumer basic_cancel
See more linked questions

4164
What are the differences between a HashMap and a Hashtable in Java?
3506
What is the difference between public, protected, package-private and private in Java?
3302
What is a serialVersionUID and why should I use it?
1699
Difference between StringBuilder and StringBuffer
73
RabbitMQ: persistent message with Topic exchange
59
RabbitMQ use of immediate and mandatory bits
2420
What's the difference between @Component, @Repository & @Service annotations in Spring?
198
RabbitMQ / AMQP: single queue, multiple consumers for same message?
250
Why do we need message brokers like RabbitMQ over a database like PostgreSQL?
61
RabbitMQ by Example: Multiple Threads, Channels and Queues