commands not found on zsh

I am using the z Shell (zsh) instead of the default bash, and something wrong happen so that all commands who used to work are no longer recognized:

I don't know how to reset zsh or how to fix this. Here is the content of $PATH variable:

I cannot open the .bash_profile file nor .zshrc file, seems the only solution is to reset the zsh. Any ideas?

I even tried to reset zsh as indicated in this thread, but always got command not found error:

so what's going on? why all commands are lost?

It's evident that you've managed to mess up your PATH variable. (Your current PATH doesn't contain any location where common utilities are located.)

Alternatively, for "resetting" zsh, specify the complete path to the shell:

In your ~/.zsh config file include the path to your bash path file that contains your aliases. In my case it was including the line "source ~/.bash_profile" inside of ~/.zsh .

And it should work for you.

You can test if this will work first by typing this in your terminal first: export PATH=$HOME/.local/bin:$PATH

If the error disappears after you type this into the terminal and your terminal functions normally, the above solution will work. If it doesn't, you'll have to find the folder where your reference error is located (the thing not found), and replace the PATH above with the PATH-TO-THAT-FOLDER.

You can create a symlink in /usr/local/bin/

I fixed the issue by opening the terminal preference general tab and changing the Command (complete path) to /bin/bash to default and then editing the ~/.zshrc file.

...without any whitespace between the PATH=" and save the file.

After saving the file, change the /bin/zsh in your command or select default

...and restart terminal and you should have your zsh shell working again!

Change back to bash:

back to the zsh:

For me just restarting my terminal seemed to fix the issue.

Best solution work for me for permanent change path

.zshrc is hidden file so unhide it by command+shift+. press 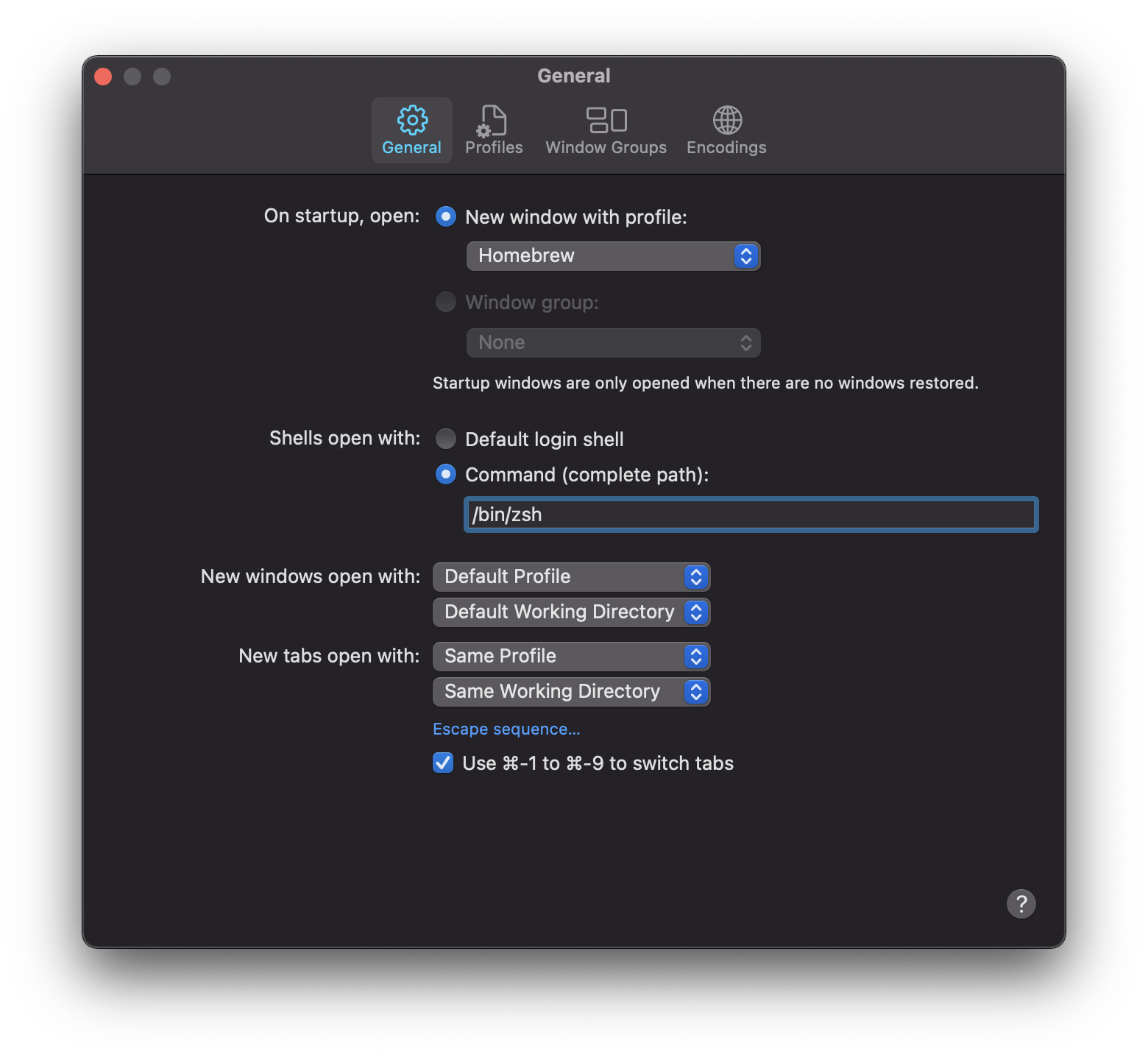 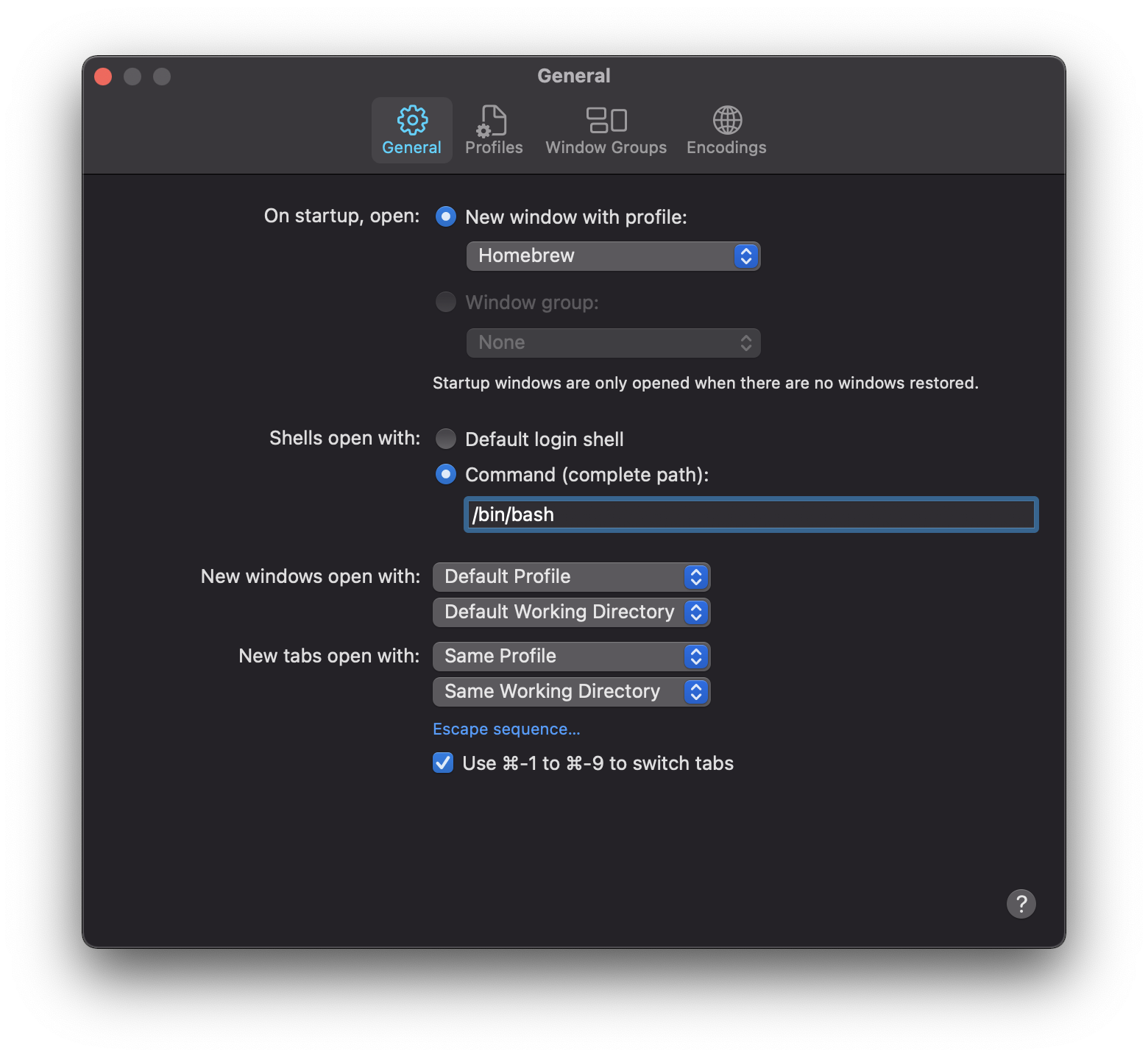 You can now go back to .zshrc file to revert the last change you made

If you like me, you will have two terminals app, one is the default terminal with bash as the default shell and another iTerm 2 with zsh as its shell. To have both commands and zsh in iTerm 2 from bash, you need to do the following:

On iTerm 2, go to preferences (or command ,). Then go to the profile tab and go down to command. As you can see on the picture below, you need to select command option and paste path of zsh shell (to find the path, you can do which zsh).

At this point you will have the zsh as your default shell ONLY for iTerm 2 and you will have bash as the global default shell on default mac terminal app. Next, we are still missing the commands from bash in zsh. So to do this, you need to go on your bash (where you have your commands working) and get the PATH variable from env (use this command to do that: env | grep PATH).

Once you have that, go to your iTerm 2 and paste your path on "send text at start" option.

Just reopen iTerm 2 and we are done!

I solved my problem by reinstalling and/or add at the end of the ~/.zshrc file:

Oh My Zsh is installed by running one of the following commands in your terminal. You can install this via the command-line with either curl or wget.

Restarting the terminal also made the trick for me.

In my case, it was by mistake the commented code was uncommented at the very first line.

The hash was removed. After adding it back worked fine.

I just posted this here so someone might find this helpful. Because it's just start of the line and might be deleted by mistake like I had done. And seems there's no solution after trying several ways.

You need to create the .zprofile file and write into it

exit and Save and after run this code into shell

As others have said, simply restarting the terminal after you've made changes should reset and changes you've made to your ~/.zshrc file. For instance after adding function to open visual studio:

I was able to use the keyword code to open the program from the command line.

A way to edit the .zshrc file without doing it through iTerm2 or native Terminal on macOS is to use a terminal in another application. For example, I used the terminal as part of VSCode and was able to find and edit the file.

if you are using macOS, try to follow this step

if you write the code to export PATH in ~/.bash_profile then don't miss the Step 1

In my case I was using the variable path in lowercase!

So in /etc/profile.d I was running a script that made use of the variable path. Because it was in lowercase I never thought it could mess up with the actual variable PATH. Be careful and do not use the variable path on your scripts.

I had a similiar problem when I installed ZSH on my ubuntu, I was getting the error zsh: command not found node when I tried to exec node or another command.

The solution for my was to open my ~/.zshrc file and write the next code on it:

Then I closed and reopened my terminal and that's it.

Uninstall and reinstall zsh worked for me:

Not the answer you're looking for? Browse other questions tagged shell osx-lion zsh or ask your own question.

1169
How to call shell commands from Ruby
2308
How to mkdir only if a directory does not already exist?
0
ZSH Ruby command not found
0
Open terminal windows and execute custom commands in them?
44
Anaconda not found in ZSh?
2
macOS Sierra: ${TAIL} is not working in zsh
0
zsh: command not found: atom