I receive this error when trying to launch IIS Express from Visual Studio with a project that's configured to listen to an address other than localhost. Visual Studio freezes for about 30 seconds before giving the error "Unable to launch the IIS Express Web server".

I've tried all the solutions posted to similar questions and I think I've done everything correctly. Here are the steps that I have taken:

I also tried changing the port and repeating the above steps just incase the port was in use for some reason.

I want to make my IIS Express developer instance accessible from my IP on the Internet for remote testing.

If using VS2015, close the solution, delete the following file, then re-open the solution.

note the .vs folder may be hidden

The one thing that fixed this for me was using the following line in the <bindings> section for my site in the applicationhost.config file:

After doing this, I don't need to run Visual Studio as administrator, and I can freely change the Project Url in the project properties to the local IP or computer name. I then set up port forwarding and it was accessible to the Internet.

I've discovered one more quirk that is important to getting IIS Express to properly serve external requests.

I had exactly the same issue. Tried everything but finally one trick worked.

I do not recommend deleting IIS Express folder or messing with the config file in it.

in the "applicationhost.config" in "Documents\IISExpress\config" for a particular webapplication it was overwritten by Visual Studio 2012 again to default port whenever I was starting my webapplication.

But I resolved the problem by doing nothing in the applicationhost.config. I just changed the "project properties" > "web" > "project url" setting from http://localhost:62135/ to http://localhost:47279/(depends on your computer) and it worked for me.

Simply start your Visual Studio as Run as Administrator

I had the same issue, but with a different cause that may help others.

Deleting the unnecessary site entries from applicationhost.config file solved the issue for me.

In my case i tried following things to fix this problem.

I fixed it with the following steps: 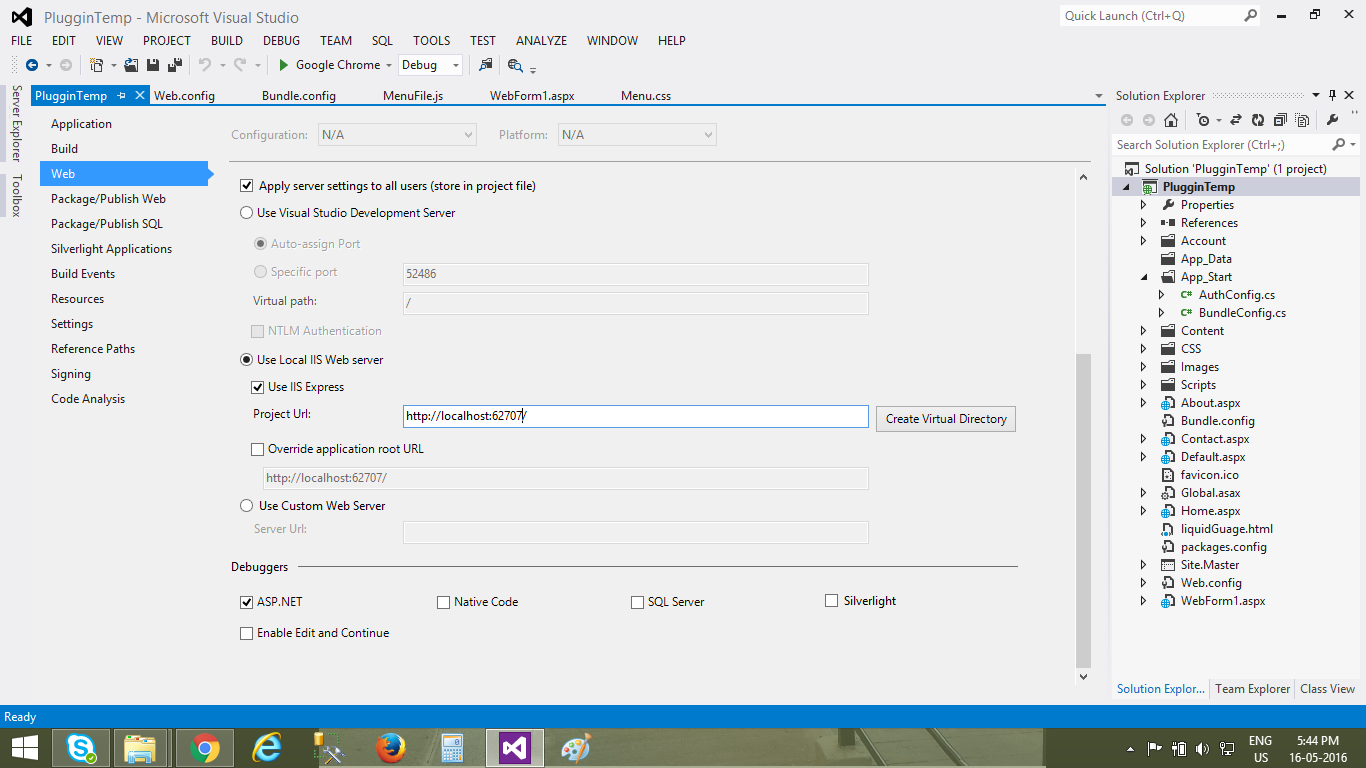 I spent 1 hour trying every recipe mentioned above. Then out of no where I restarted my computer, and tried again. And everything is fine now.

So please try restarting your computer before trying all the above mentioned solutions. It might help

I had the same problem with Visual Studio 2012. I managed to resolve it by removing from C:\Program Files (x86)\IIS Express\AppServer\applicationhost.config path unneccessary site entries. Alongwith running my VS2012 as an Administrator. Hope this helps

At the start, Try to disable your firewall. It helped me. The Eset Smart Security 5 blocked it.

I had this problem some days ago and all of above items could not help me. I have ESET Smart Security 5.0 on my SONY VAIO laptop which works in interactive mode! Finally I found the problem, ESET was blocking VS2012! In the past, ESET had asked me to allow the VS2012 to communicate with Microsoft, I had chosen "Deny Access" and ESET had mad a rule for denying VS2012. I omitted this rule from "ESET rules zone" and my issue was solved!

Delete IISExpress folder in my My Documents folder to ensure the default settings or restore the same to previous version when it was working fine.

In VS 2013 I saw this error after setting up Google Docs synchronization on My Documents. Updated permissions to not be read-only and problem solved.

open command prompt as administrator then execute this command :

you will see the url you have added before now you should execute this command :

I face this issue, All I did was go to the web project Properties -> Web -> In the ProjectUrl I clicked on the "Create Virtual Directory" and my issue was fixed.

I had the same issue with my computer having loads of windows updates.

Spent few hours trying to resolve the issue using above answers with no luck.

In past we have different issues due to anti-virus which caused the application to be blocked by it, so thought to try by disabling it.

So after trying all the solution, I just uninstall "One Drive" from my PC & the problem is resolved.

Click the Solution and press F4. Then match the port from Right-click on solution and select Properties to the web tab port. The port no will be the same of both case F4 and Properties.

Tried deleting IISExpress folder, changed port , restart VS and PC but it didn't work. However it worked after killing iisexpress.exe service in services.

change the parameter in the registry

parameter Start from 4 to 3 and reboot

Not the answer you're looking for? Browse other questions tagged asp.net visual-studio-2012 windows-8 iis-express or ask your own question.