Difference between _self, _top, and _parent in the anchor tag target attribute

I know _blank opens a new tab when used with the anchor tag and also, there are self-defined targets I use when using framesets but I will like to know the difference between _parent, _self and _top.

While these answers are good, IMHO I don't think they fully address the question.

The target attribute in an anchor tag tells the browser the target of the destination of the anchor. They were initially created in order to manipulate and direct anchors to the frame system of document. This was well before CSS came to the aid of HTML developers.

While target="_self" is default by browser and the most common target is target="_blank" which opens the anchor in a new window(which has been redirected to tabs by browser settings usually). The "_parent", "_top" and framename tags are left a mystery to those that aren't familiar with the days of iframe site building as the trend.

target="_self" This opens an anchor in the same frame. What is confusing is that because we generally don't write in frames anymore (and the frame and frameset tags are obsolete in HTML5) people assume this a same window function. Instead if this anchor was nested in frames it would open in a sandbox mode of sorts, meaning only in that frame.

target="_top" This breaks outside of all the frames it is nested in and opens the link as top document in the browser window.

target="framename This was originally deprecated but brought back in HTML5. This will target the exact frame in question. While the name was the proper method that method has been replaced with using the id identifying tag.

Below is an image showing nested frames and the effect of different target values, followed by an explanation of the image. 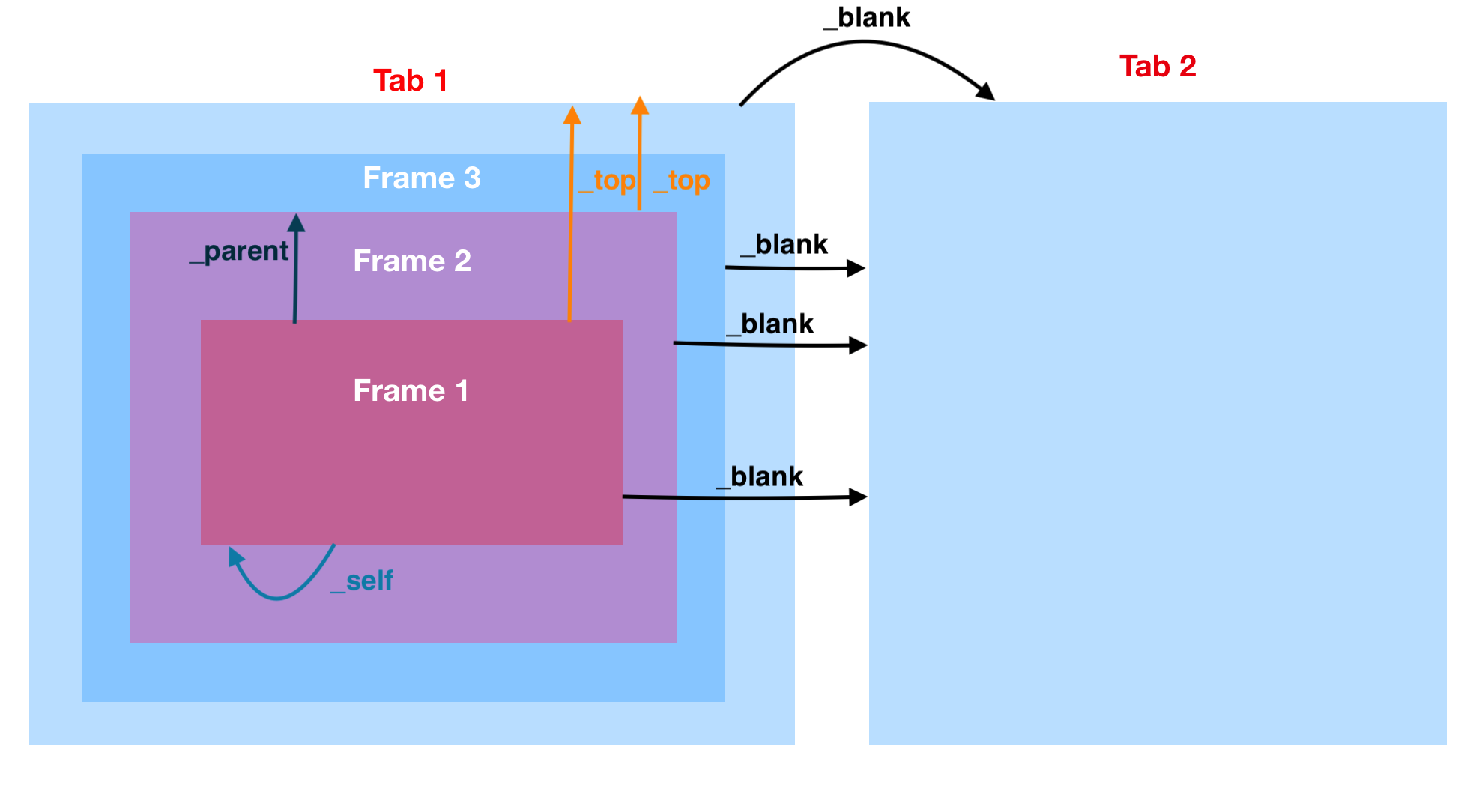 Imagine a webpage containing 3 nested <iframe> aka "frame"/"frameset". So:

Then target attributes have these effects:

Section 6.16 Frame target names in the HTML 4.01 spec defines the meanings, but it is partly outdated. It refers to “windows”, whereas HTML5 drafts more realistically speak about “browsing contexts”, since modern browsers often use tabs instead of windows in this context.

Briefly, _self is the default (current browsing context, i.e. current window or tab), so it is useful only to override a <base target=...> setting. The value _parent refers to the frameset that is the parent of the current frame, whereas _top “breaks out of all frames” and opens the linked document in the entire browser window.

Opens a new window and show the related data.

Opens the window in the same frame, it means existing window itself.

Opens the linked document in the full body of the window.

Opens data in the size of parent window.

Here is a practical example of Anchor tag with different

Not the answer you're looking for? Browse other questions tagged html hyperlink anchor or ask your own question.