I'm trying to get an built that allows users to upload a file directly to my Amazon S3 bucket, from a NodeJS powered website. It seems the only tutorials out there, other than the actual amazon docs for this are all very out of date.

I've been following this tutorial, for the basic info, but again it's out dated. It doesn't have the method calls to crypto correct, as it tries to pass a raw JavaScript object to the update method, which throws an error because it's not a string or buffer.

I've also been looking at the source for the knox npm package. It doesn't have POST support built in - which I totally understand, because it's the browser doing the POST once it has the right fields. Knox does appear to have the right code to sign a policy, and I've tried to get my code working based on this... but again to no avail.

Here is what I've come up with, for code. It produces a base64 encoded policy, and it creates a signature... but it's the wrong signature according to Amazon, when I try to do a file upload.

I'm obviously doing something wrong, here. But I have no idea what. Can anyone help identify what I'm doing wrong? Where my problem is? Does anyone have a working tutorial for how to generate a proper Amazon S3 Policy, with signature, from NodeJS v0.10.x, for a POST to the s3 REST api?

Ok, I finally figured it out. After playing the random guessing game for a VERY long time, I thought to myself

and BAM that was it.

I also re-ordered the conditions to match how the form is posting, though I'm not sure this makes a difference.

Hopefully this will help others that run in to the same problem.

I modified a bit previous example, because it didn't work for me: amazon returned an error about broken signature. 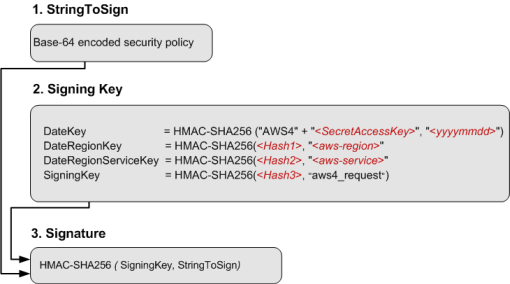 Next generated base64Policy and s3Signature i used in the form for uploading. Example is here: http://docs.aws.amazon.com/AmazonS3/latest/API/sigv4-post-example.html

Very important is to check that you have the same fields and values in the html form and in your policy.

I continued to have issues, so I worked through them and posted my solution here:

In short, if you go with scabbiaza's answer in building the signature, make sure to build the form like so:

Not the answer you're looking for? Browse other questions tagged javascript node.js

amazon-s3 cryptography or ask your own question.

1951
How can I update NodeJS and NPM to their latest versions?
0
Amazon S3 - Bucket Policy
7
Amazon S3 Policy Signing in Java
651
What is the difference between Amazon SNS and Amazon SQS?
12
How to upload files to Amazon S3 with Meteor?
0
Amazon S3 Bucket Policy Isn't Saved
3
AWS Creating POST policy base64 encoded + signature
3
How to encode a POST Policy in golang - browser based uploads to amazon S3?
1
Converting an s3 bucket policy to base64 from JSON in node.js
0
Amazon S3 SignatureDoesNotMatch error with NodeJS