Git Extensions: Everything was working fine until yesterday.

It is happening for all the repositories which I have cloned. But, my git bash is working fine. I don't have any idea what is going on. Any idea as to why this is happening?

I had the same problem. I found solution here http://jakob.engbloms.se/archives/1403

For me solution was slightly different. It was

Before you rebase dlls, you should make sure it is not in use:

And make a backup:

You will need to perform the following steps in order:

If any issue run the commands as Administrator

This symptom by itself has nothing to do with image bases of executables, corrupted Cygwin's shared memory sections, conflicting versions of DLLs etc.

It's Cygwin code failing to allocate a ~5 MB large chunk of memory for its heap at this fixed address 0x68570000, while only a hole ~2.5 MB large was apparently available there. The relevant code can be seen in msysgit source.

Why is that part of address space not free?

There can be many reasons. In my case it was some other modules loaded at a conflicting address: 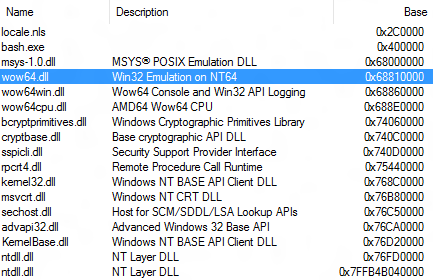 Whenever there is some shared DLL, Windows in general tries to load it at the same virtual address in all processes to save some relocation processing. It's just a matter of bad luck that these system components got somehow loaded at a conflicting address this time.

Why is there Cygwin in your Git?

Because Git is a rich suite consisting of some low level commands and a lot of helpful utilities, and mostly developed on Unix-like systems. In order to be able to build it and run it without massive rewriting, it need at least a partial Unix-like environment.

To accomplish that, people have invented MinGW and MSYS - a minimal set of build tools to develop programs on Windows in an Unix-like fashion. MSYS also contains a shared library, this msys-1.0.dll, which helps with some of the compatibility issues between the two platforms during runtime. And many parts of that have been taken from Cygwin, because someone already had to solve the same problems there.

So it's not Cygwin, it's MinGW's runtime DLL what's behaving weird here.

In Cygwin, this code has actually changed a lot since what's in MSYS 1.0 - the last commit message for that file says "Import Cygwin 1.3.4", which is from 2001!

Both current Cygwin and the new version of MSYS - MSYS2 - already have different logic in place, which is hopefully more robust. It's only old versions of Git for Windows which have been still built using the old broken MSYS system.

Go to the folder where git is installed, such as:

By holding shift and right clicking in the folder, you should be able to open a command prompt as administrator from there (thanks to https://stackoverflow.com/users/355389/darren-lewis for that comment),

This fixed it for me when the restart approach didn't work.

I have seen the same error message after upgrading to git1.8.5.2:

Simply make a search for all msys-1.0.dll on your C:\ drive, and make the one used by Git comes first.

For instance, in my case I simply changed the order of:

No need to reboot or to even change the DOS session.
Once the %PATH% is updated in that DOS session, the git commands just work.

Note that carmbrester and Sixto Saez both report below (in the comments) having to reboot in order to fix the issue.
Note: First, also removing any msys-1.0.dll, like one in %LOCALAPPDATA%

If a reboot does not correct the problem (as suggested by Greg Hegwill's answer) then check your PATH for conflicting installation(s) of the msys-1.0.dll (and possibly other related DLLs).

A temporary fix was to add Git's bin directory to the PATH so that it appears before MinGW's paths. (A more permanent fix will likely involve sorting out the path conflicts between MinGW's msys and Git's and/or removing the duplicate msys installations.)

Just want to share my experience here. I came across the same issue while cross compiling for MTK platform on a Windows 64 bit machine. MinGW and MSYS are involved in the building process and this issue popped up. I solved it by changing the msys-1.0.dll file. Neither rebase.exe nor system reboot worked for me.

Though rebasing looked successful, the error remained. Then I ran rebase command inside Cygwin64 terminal and got an error:

I later tried a couple address but neither of them worked. So I ended up changing the msys-1.0.dll file and it solved the problem.

I ran into this today. Led by Greg Hewgill's answer, I looked at running processes on my system to see if anything was "stuck" or if other users were logged into the machine doing anything with git. I then launched cygwin (installed separately) on this particular machine. It launched ok. I closed it and then tried the Git Extensions again (I was trying a pull operation) and it worked. Not sure if the launching of cygwin cleared something that was shared but this is the first time I ran into this error and this seemed to fix it for me.

I had the same problem, after some Windows 8.0 crash and update, on msys git 1.9. I didn't find any msys/git in my path, so I just added it in windows local-user envinroment settings. It worked without restarting.

Basically, similiar to RobertB, but I didn't have any git/msys in my path.

This error happens very rarely on my Windows machine. I ended up rebooting the machine, and the error went away.

I have encountered this issue witht he LPCEXpresso building.if you have the C:\MinGW\bin in the PATH. somehow I had to remove it to get rid of this issue since some other MinGW like based too

To fix this issue, I simply let Tortoise Git install its update.

Deleting old version of %USERPROFILE%\AppData\Local\SourceTree\app-x.x.x worked for me. Not sure how it was connected to command line git...

Not the answer you're looking for? Browse other questions tagged git cygwin git-extensions or ask your own question.

1
github merge origin and master repository
721
Git Push Error: insufficient permission for adding an object to repository database
0
Git pull fails to parse syntax
2
GIT extensions how to replace a file and not merge.
9
'Maybe git-rebase is broken'
2
Jenkins fail to clone from Gitlab because timeout
1
Git Extensions: Unable to push to repo after renaming it (gitolite)
0
Git-extensions scripts - How to use git log command