Given a system (a website for instance) that lets a user customize the background color for some section but not the font color (to keep number of options to a minimum), is there a way to programmatically determine if a "light" or "dark" font color is necessary?

I'm sure there is some algorithm, but I don't know enough about colors, luminosity, etc to figure it out on my own.

I encountered similar problem. I had to find a good method of selecting contrastive font color to display text labels on colorscales/heatmaps. It had to be universal method and generated color had to be "good looking", which means that simple generating complementary color was not good solution - sometimes it generated strange, very intensive colors that were hard to watch and read.

After long hours of testing and trying to solve this problem, I found out that the best solution is to select white font for "dark" colors, and black font for "bright" colors.

Here's an example of function I am using in C#:

This was tested for many various colorscales (rainbow, grayscale, heat, ice, and many others) and is the only "universal" method I found out.

Edit
Changed the formula of counting a to "perceptive luminance" - it really looks better! Already implemented it in my software, looks great.

Based on Gacek's answer but directly returning color constants (additional modifications see below):

Note: I removed the inversion of the luma value to make bright colors have a higher value, what seems more natural to me and is also the 'default' calculation method.
(Edit: This has since been adopted in the original answer, too)

I used the same constants as Gacek from here since they worked great for me.

You can also implement this as an Extension Method using the following signature:

You can then easily call it via
foregroundColor = backgroundColor.ContrastColor().

Thank you @Gacek. Here's a version for Android:

And an improved (shorter) version:

My Swift implementation of Gacek's answer:

Ugly Python if you don't feel like writing it :)

This is such a helpful answer. Thanks for it!

Now figuring out how to use the algorithm to auto-create hover colors for menu links. Light headers get a darker hover, and vice-versa.

Calculate the luminance (Y) of the given color, and flip the text either black or white based on a pre-determined middle contrast figure. For a typical sRGB display, flip to white when Y < 0.4 (i.e. 40%)

Not surprisingly, nearly every answer here presents some misunderstanding, and/or is quoting incorrect coefficients. The only answer that is actually close is that of Seirios, though it relies on WCAG 2 contrast which is known to be incorrect itself.

If I say "not surprisingly", it is due in part to the massive amount of misinformation on the internet on this particular subject. The fact this field is still a subject of active research and unsettled science adds to the fun. I come to this conclusion as the result of the last few years of research into a new contrast prediction method for readability.

The field of visual perception is dense and abstract, as well as developing, so it is common for misunderstandings to exist. For instance, HSV and HSL are not even close to perceptually accurate. For that you need a perceptually uniform model such as CIELAB or CIELUV or CIECAM02 etc.

Some misunderstandings have even made their way into standards, such as the contrast part of WCAG 2 (1.4.3), which has been demonstrated as incorrect over much of its range.

The coefficients shown in many answers here are (.299, .587, .114) and are wrong, as they pertain to a long obsolete system known as NTSC YIQ, the analog broadcast system in North America some decades ago. While they may still be used in some YCC encoding specs for backwards compatibility, they should not be used in an sRGB context.

The coefficients for sRGB and Rec.709 (HDTV) are:

The coefficients can not be applied directly to 8 bit sRGB encoded image or color data. The encoded data must first be linearized, then the coefficients applied to find the luminance (light value) of the given pixel or color.

For sRGB there is a piecewise transform, but as we are only interested in the perceived lightness contrast to find the point to "flip" the text from black to white, we can take a shortcut via the simple gamma method.

Divide each sRGB color by 255.0, then raise to the power of 2.2, then multiply by the coefficients and sum them to find estimated luminance.

Here, Y is the relative luminance from an sRGB monitor, on a 0.0 to 1.0 scale. This is not relative to perception though, and we need further transforms to fit our human visual perception of the relative lightness, and also of the perceived contrast.

Why 40% and not 50%? Our human perception of lightness/darkness and of contrast is not linear. For a self illuminated display, it so happens that 0.4 Y is about middle contrast under most typical conditions.

Yes it varies, and yes this is an over simplification. But if you are flipping text black or white, the simple answer is a useful one.

Predicting the perception of a given color and lightness is still a subject of active research, and not entirely settled science. The L* (Lstar) of CIELAB or LUV has been used to predict perceptual lightness, and even to predict perceived contrast. However, L* works well for surface colors in a very defined/controlled environment, and does not work as well for self illuminated displays.

While this varies depending on not only the display type and calibration, but also your environment and the overall page content, if you take the Y from above, and raise it by around ^0.685 to ^0.75, you'll find that 0.5 is typically the middle point to flip the text from white to black.

It is useful to note that contrast is NOT just the distance between two colors. Spatial frequency, in other words font weight and size, are also CRITICAL factors that cannot be ignored.

That said, you may find that when colors are in the midrange, that you'd want to increase the size and or weight of the font.

It's outside the scope of this post to delve deeply, but above we are ignoring hue and chroma. Hue and chroma do have an effect, such as Helmholtz Kohlrausch, and the simpler luminance calculations above do not always predict intensity due to saturated hues.

To predict these more subtle aspects of perception, a complete appearance model is needed. R. Hunt, M. Fairshild, E. Burns are a few authors worth looking into if you want to plummet down the rabbit hole of human visual perception...

For this narrow purpose, we could re-weight the coefficients slightly, knowing that green makes up the majority of of luminance, and pure blue and pure red should always be the darkest of two colors. What tends to happen using the standard coefficients, is middle colors with a lot of blue or red may flip to black at a lower than ideal luminance, and colors with a high green component may do the opposite.

That said, I find this is best addressed by increasing font size and weight in the middle colors.

So we'll assume you'll send this function a hex string, and it will return a style string that can be sent to a particular HTML element.

Check out the CODEPEN, inspired by the one Seirios did:

One of the things the Codepen code does is increase the text size for the lower contrast midrange. Here's a sample: 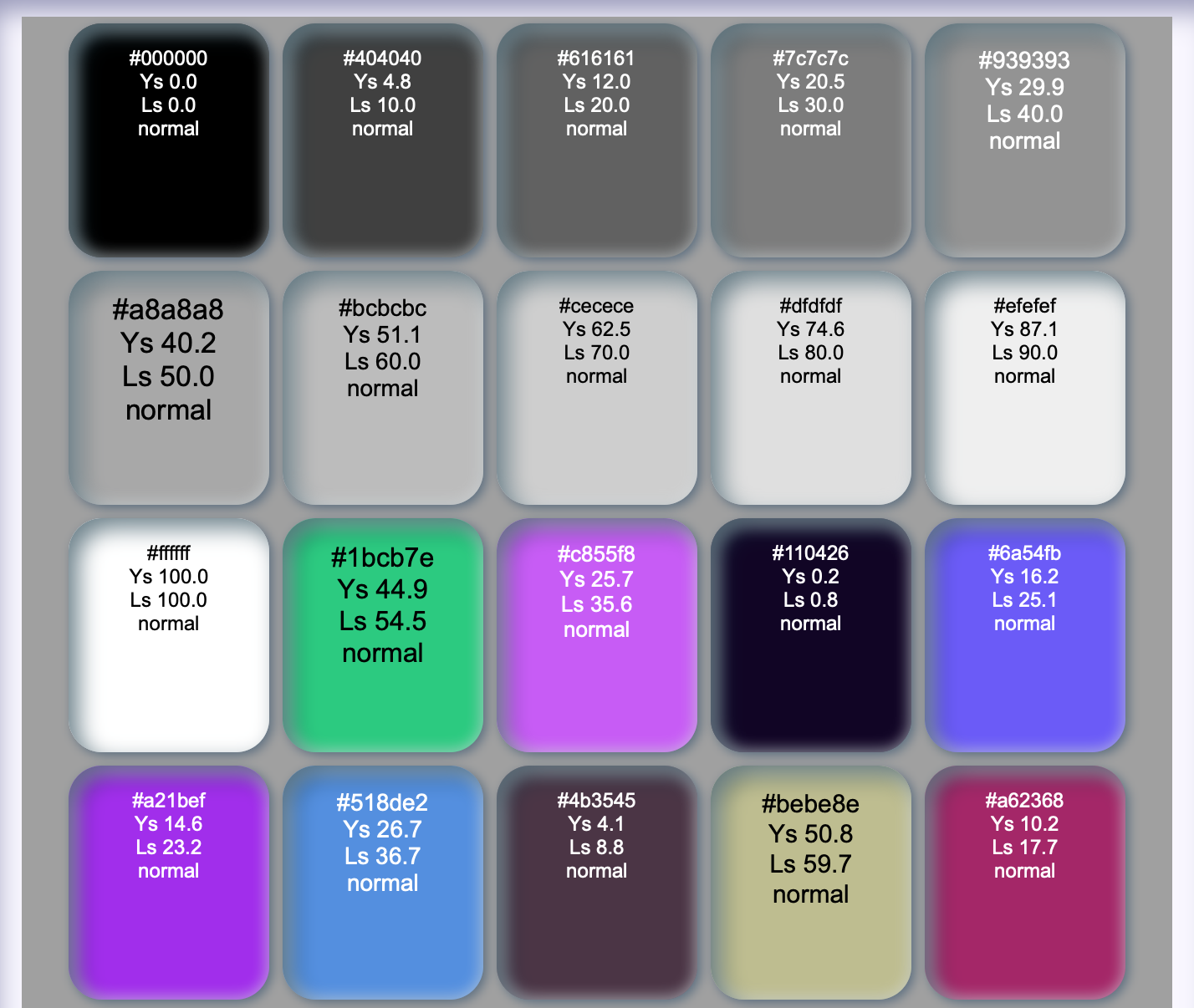 And if you want to play around with some of these concepts, see the SAPC development site at https://www.myndex.com/SAPC/ clicking on "research mode" provides interactive experiments to demonstrate these concepts.

I had the same problem but i had to develop it in PHP. I used @Garek's solution and i also used this answer: Convert hex color to RGB values in PHP to convert HEX color code to RGB.

So i'm sharing it.

I wanted to use this function with given Background HEX color, but not always starting from '#'.

Based on Gacek's answer, and after analyzing @WebSeed's example with the WAVE browser extension, I've come up with the following version that chooses black or white text based on contrast ratio (as defined in W3C's Web Content Accessibility Guidelines (WCAG) 2.1), instead of luminance.

This is the code (in javascript):

A working example may be found in my fork of @WebSeed's codepen, which produces zero low contrast errors in WAVE.

An implementation for objective-c

UPDATE - Found that 0.6 was a better test bed for the query

Note there is an algorithm for this in the google closure library that references a w3c recommendation: http://www.w3.org/TR/AERT#color-contrast. However, in this API you provide a list of suggested colors as a starting point.

If you're manipulating color spaces for visual effect it's generally easier to work in HSL (Hue, Saturation and Lightness) than RGB. Moving colours in RGB to give naturally pleasing effects tends to be quite conceptually difficult, whereas converting into HSL, manipulating there, then converting back out again is more intuitive in concept and invariably gives better looking results.

Wikipedia has a good introduction to HSL and the closely related HSV. And there's free code around the net to do the conversion (for example here is a javascript implementation)

What precise transformation you use is a matter of taste, but personally I'd have thought reversing the Hue and Lightness components would be certain to generate a good high contrast colour as a first approximation, but you can easily go for more subtle effects.

You can have any hue text on any hue background and ensure that it is legible. I do it all the time. There's a formula for this in Javascript on Readable Text in Colour – STW* As it says on that link, the formula is a variation on the inverse-gamma adjustment calculation, though a bit more manageable IMHO. The menus on the right-hand side of that link and its associated pages use randomly-generated colours for text and background, always legible. So yes, clearly it can be done, no problem.

An Android variation that captures the alpha as well.

I would have commented on the answer by @MichaelChirico but I don't have enough reputation. So, here's an example in R with returning the colours:

Not the answer you're looking for? Browse other questions tagged algorithm language-agnostic colors or ask your own question.

0
How to implement a color contrast enriching algorithm?
1
How do you calculate a "highlight color"?
485
Formula to determine perceived brightness of RGB color
104
Convert hex color to RGB values in PHP
69
JS function to calculate complementary colour?
7
Use CSS to dynamically calculate the forground color based on the inherited background color
3
C# get good color for label
2
How to inverse font color based on cell's background Color in Google Apps Script?
3
Show dimensions of Excel shape in column widths and row heights vba
0
From a list of colors, how can I get a light or dark color that is visible over each color simultaneously?
See more linked questions

1493
Determine Whether Two Date Ranges Overlap
460
How can I color Python logging output?
4
Intelligent Color Detection
860
How to change node.js's console font color?
1824
Image Processing: Algorithm Improvement for 'Coca-Cola Can' Recognition
784
How do I determine whether my calculation of pi is accurate?
6
An algorithm for selecting a dark color similar to a light color
8
How to change terminal font color in PyCharm?
0
Custom elevated background color for iOS dark mode