How can I force a hard reload in Chrome for Android

In Chrome for desktop I have options in the dev tools to disable cache completely when dev tools are opened and I have the options to manually do a hard reload when long clicking on the reload button (with dev tools open).

Is there any such technique for Chrome for Android? I didn't find any setting. What can I do when I want to force the browser to download some javascript or css file instead of using a cached one when developing?

I'm using window.location.reload(true) according to MDN (and this similar question) it forces page to reload from server.

You can execute this code in the browser by typing javascript:location.reload(true) in the address bar.

Viewing the page in incognito mode will disable the cache. It was the only way I could force a refresh on a stylesheet without manually clearing the cache through the settings.

and then reload the page.

You can use the Request Desktop Site option from the app menu (to the right of the address bar) which will force the page to reload.

Simply tap it, wait for the refresh, then deselect it.

Mentioning this because you mentioned "when developing".

You can control the mobile device via your Chrome Desktop Browser.

You should now see a full fledged Devtool window for the current page on mobile device.

Now, Use the hard reload shortcut (Cmd+Shift+R) on desktop to do hard reload on mobile device!

How to reset all data for a given URL / Website on Chrome Mobile for android: 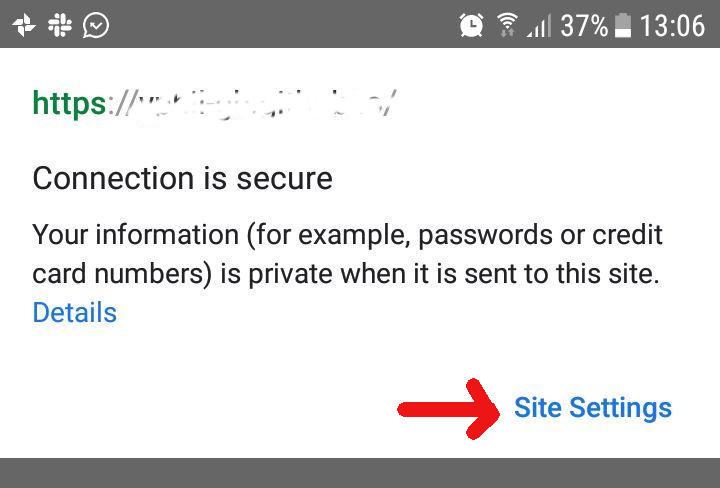 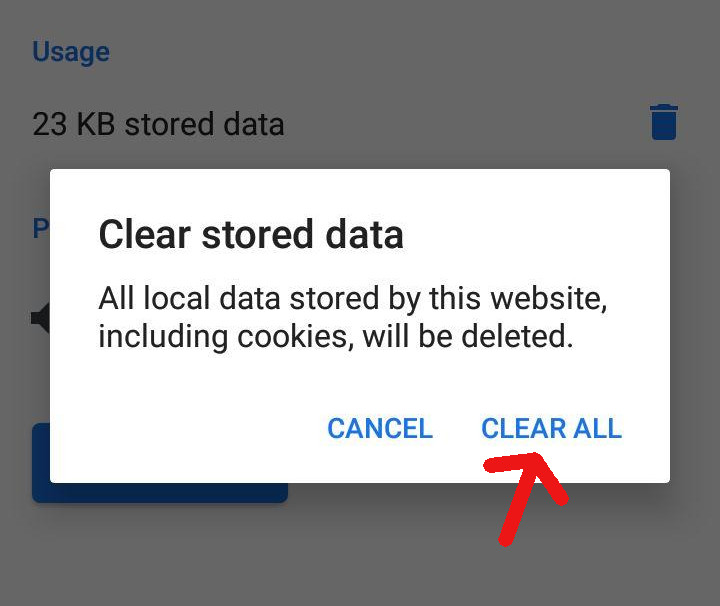 That's it, even the most deeply ensconsed service worker for that URL will now die.

Don't forget to make sure that the "Reduce data usage" setting is turned OFF, as it seems to download cached data (from Google servers?) even though your local cache is flushed.

I know this is an old question, but I found that the accepted answer didn't work for me.

If you have parameters already, of course, you would use an ampersand i.e. website.com?q=test&a=1

As mentioned in another answer, incognito tabs are also of great use for development.

The only reliable way I've found that doesn't require plugging the phone in to a PC is as follows:

This must be done first, and you cannot re-open Chrome until you finish these steps. There are several ways to force stop. Most home launchers will let you get to "App info" by holding down your finger on the chrome icon and selecting an "i" icon. Alternately, you may be able to go to Android settings and simply search for "Chrome".

Once in "App info", select "Force stop" as shown below: 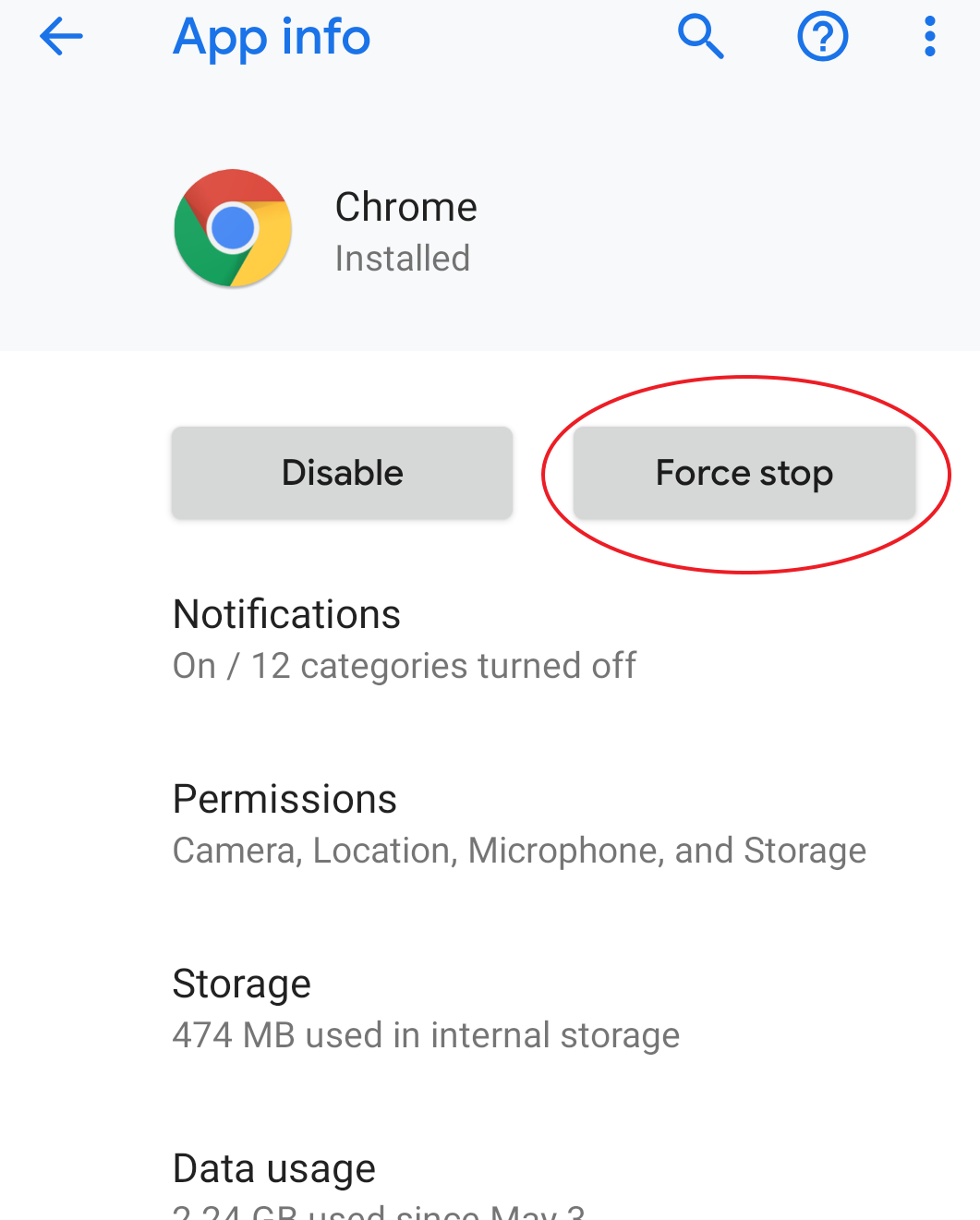 Select "Storage" from the same screen: 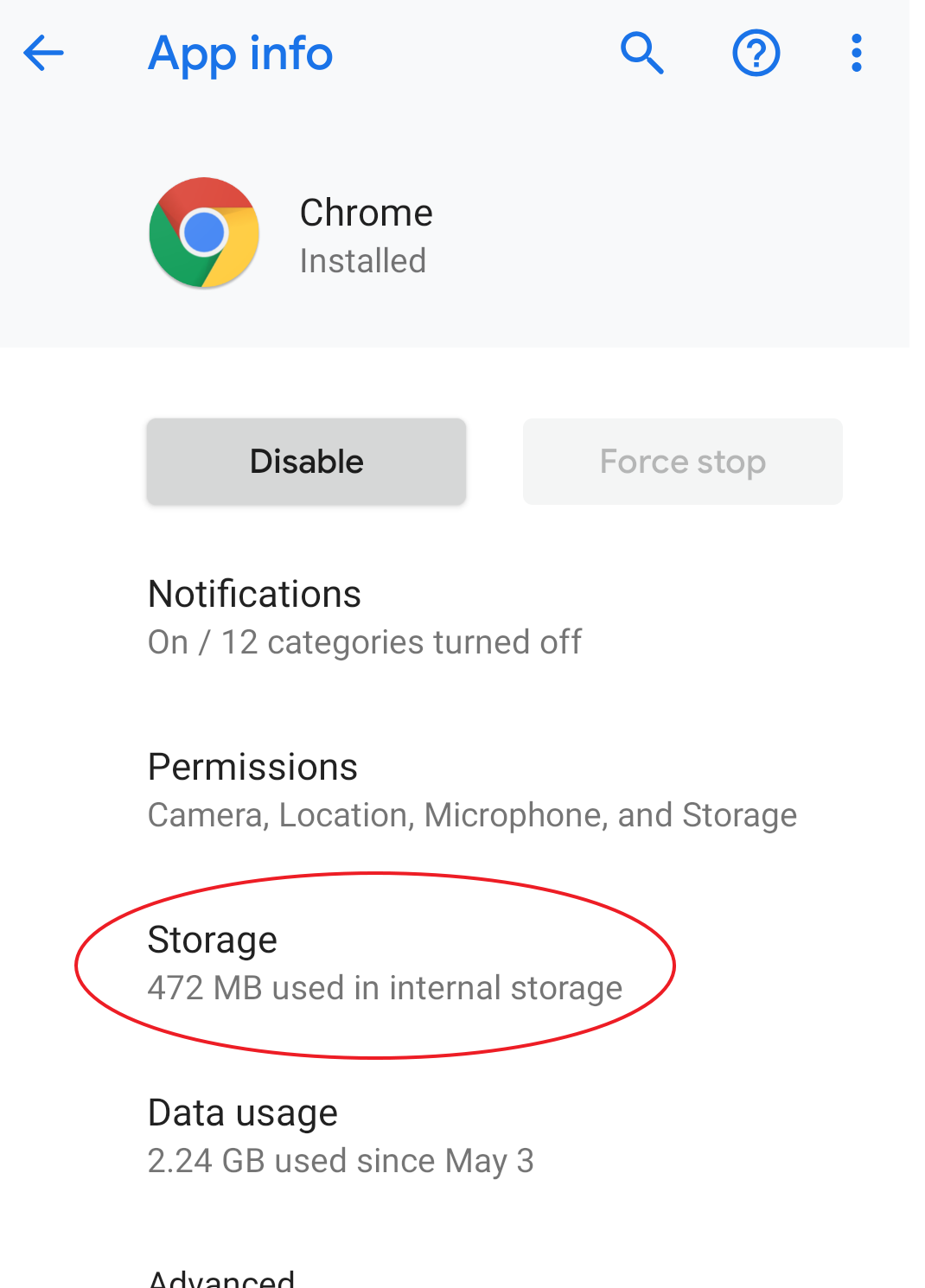 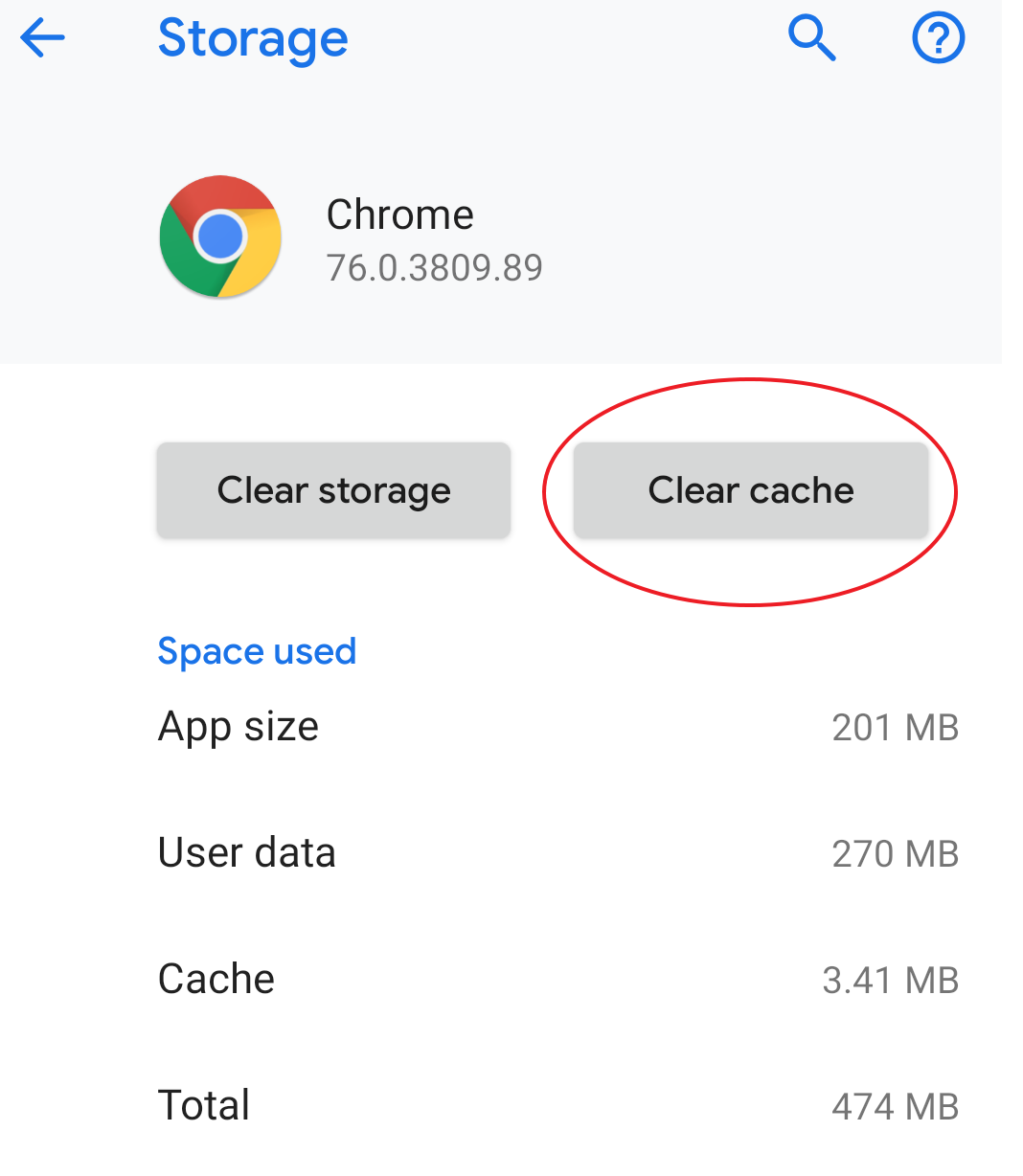 When you return to the Chrome app, the page should reload itself and serve a non-cached version.

Additionally, I found a site that makes it easy to test if you've cleared your cache: https://refreshyourcache.com/en/cache-test/
I am in no way affiliated with it. Note that the method to clear the cache mentioned on that site is in fact outdated and no longer valid.

I found a solution that works, but it's ugly.

Note: if your phone doesn't appear in the device list:

Recent versions of Chrome cache very aggressively. Even cache-busting techniques such as "http://url?updated=datecode" stopped working. You must clear the cache or launch an incognito window every time (and make sure data-saver is off).

Remote Debugging allows you to use the desktop dev-tools:

Whoever loads the page again will see changes.

Keyboard shortcuts such as Ctrl+Shift+R work on Android too, you just need a keyboard capable of sending these keys. I used Hacker's Keyboard to send Ctrl+Shift+R, which did a hard reload on my phone.

Most of the answers were not working for me. Here is a super simple working on my Galaxy S8 in august 2020:

Add "view-source:" just before your http:.... address, navigate trough there to the changed file if different than the html or index.

You will see the unchanged file. Refresh.

EDIT: This method has been deprecated in Google Chrome and will no longer work.

I was able to clear the cache (including subsequent xhr) using chrome://net-internals 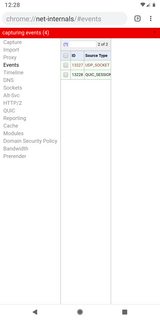 Then click the little arrow in the top right 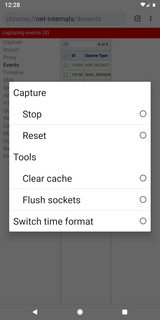 Select "clear cache" from that menu.

Here is another simple solution that may work when others fail:

Today, a fairly simple developer-side solution worked for me when the caching problem was a cached CSS file. In short: Create a temporary html file copy and browse to it to update the CSS cache.

This trick can refresh the CSS file, at least in Android's blue-globe-iconed default browser (but quite likely its twin, the official Chrome browser, too, and whatever other browsers we encounter on "smart"phones with their trend of aggressive caching).

At first I tried some of the fairly simple solutions shared here, but without success (for example clearing the recent history of the specific site, but not months and months of it). My latest CSS would however not be applied apon refresh. And that even though I had already employed the version-number-trick in the CSS file-call in the head section of the html which had helped me avoid these pesky aggressive cachings in the past. (example: link rel="stylesheet" href="style.css?v=001" where you upgrade this pseudo-version number every time you make a change to a CSS file, e.g. 001, 002, 003, 004... (should be done in every html file of the site))

This time (August 2019) the CSS file version number update no longer sufficed, nor did some of the simpler measures mentioned here work for me, or I couldn't even find access to some of them (on a borrowed android phone).

In the end I tried something relatively simple that finally solved the problem:

I made a copy of the site's index.html file giving it a different name (indexcopy.html), uploaded it, browsed to it on the Android device, then browsed back to the original page, refreshed it (with the refresh button left of the address bar), and voilà: This time the refresh of index.html finally worked.

Explanation: The latest CSS file version was now finally applied on Android when refreshing the html page in question because the cached copy of the CSS file had now been updated when the CSS file was called from a differently named temporary html page that did not exist anywhere in the browser history and that I could delete again afterwards. The aggressive caching apparently ignored the CSS URL and went instead by the HTML URL, even though it was the CSS file that needed to be updated in the cache.

Adding a parameter to url fool browser to load a new page. I wrote a fuction for that purpose:

And you just need to call it:

I've struggled with this for a CSS file that wouldn't refresh. But you can type the name of the CSS file itself into the address bar and refresh that. After that it's fine. Chrome on Android 8. Obviously that would be tiresome if you had more than a couple of files involved.

In chrome,simply tick "Desktop site" and then remove tick!!

If that's an option, you can visit the (i.e. JavaScript) resource directly, reload a bunch of times, and that also triggers a hard reload for that resource. Then you can reload the actual page again.

there are few methods to force reload chrome on mobile device:

172
window.location.reload with clear cache
131
How to find and turn on USB debugging mode on Nexus 4
-1
How to do 'hard page reload' in Chrome browser on mobile android smartphone

1369
How to manually send HTTP POST requests from Firefox or Chrome browser
1703
Disabling Chrome cache for website development
1220
How do I get ASP.NET Web API to return JSON instead of XML using Chrome?
504
How to reposition Chrome Developer Tools
148
Chrome browser reload options new feature
395
What's the difference between "Normal Reload", "Hard Reload", and "Empty Cache and Hard Reload" in Chrome?
172
How to force Chrome browser to reload .css file while debugging in Visual Studio?
380
How to find what code is run by a button or element in Chrome using Developer Tools
272
Bizarre Error in Chrome Developer Console - Failed to load resource: net::ERR_CACHE_MISS