How to launch html using Chrome at "--allow-file-access-from-files" mode?

I have the same situation with HERE

And to solve this problem I have to launch html file using Chrome at "--allow-file-access-from-files" mode. I tried next steps many times, but it doesn't work.

javascript html google-chrome
Share
Improve this question
edited May 23, 2017 at 12:17

That flag is dangerous!! Leaves your file system open for access. Documents originating from anywhere, local or web, should not, by default, have any access to local file:/// resources.

Much better solution is to run a little http server locally.

Then simply run http-server in any of your project directories:

Or as prusswan suggested, you can also install Python under windows, and follow the instructions below.

Since Python is usually available in most linux distributions, just run python -m SimpleHTTPServer in your project directory, and you can load your page on http://localhost:8000

In Python 3 the SimpleHTTPServer module has been merged into http.server, so the new command is python3 -m http.server.

Easy, and no security risk of accidentally leaving your browser open vulnerable.

Search for the path of your Chrome executable and then, on your cmd, try :

EDIT : As I see on your question, don't forget that Windows is a little bit similar to Unix, so when you type "chrome ...", cmd will search for Chrome in the PATH, but in general the Chrome folder isn't on the PATH. Also, you don't specify an extension for your executable... So if you move to Chrome's folder, this command will probably work too :

You may want to try Web Server for Chrome, which serves web pages from a local folder using HTTP. It's simple to use and would avoid the flag, which, as someone mentioned above, might make your file system vulnerable. 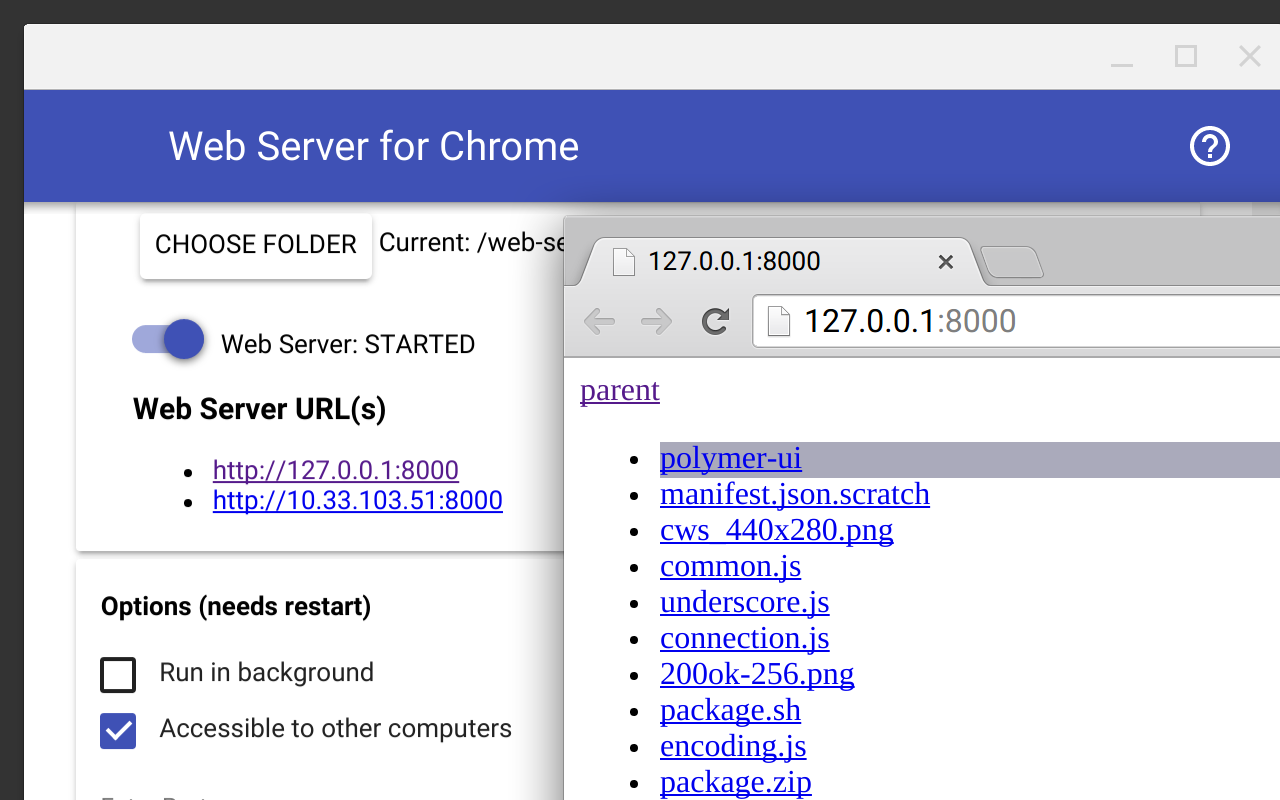 As of this writing, in OS X, it will usually look like this

If you are a freak like me, and put your apps in ~/Applications, then it will be

If neither of those are working, then type chrome://version in your Chrome address bar, and it will tell you what "command line" invocation you should be using. Just add --allow-file-access-from-files to that.

Don't do this! You're opening your machine to attacks. Instead run a local server. It's as easy as opening a shell/terminal/commandline and typing

If you are using a mac you can use the following terminal command:

Quit (force quit) all instances of chrome. Otherwise the below command will not work.

Executing this command in terminal will open Chrome regardless of where it is installed.

save above lines as .bat file

Depending on the file which will be put into filesystem, as long as that file is not a malware, then that would be safe.

But don't worry to write/read file(s) to File System directory, cause you can tighten that directory security (include it's inheritance) by give a proper access right and security restriction. eg: read/write/modify.

However you can customize it by using "--user-data-dir" flag.

And this is a sample:

Hope this helps anyone.

And then just click on the bottom which says go live, thats it. Screenshot

Not the answer you're looking for? Browse other questions tagged javascript html google-chrome or ask your own question.

1959
Disable same origin policy in Chrome
939
"Cross origin requests are only supported for HTTP." error when loading a local file
321
What is a faster alternative to Python's http.server (or SimpleHTTPServer)?
135
Chrome can't load web worker
105
Disable-web-security in Chrome 48+
96
How can I make XSLT work in chrome?
14
Swagger Editor offline installation
16
Can't open some html files in chrome (mac)
22
Cannot access cssRules from local css file in Chrome 64
19
How can I access the DOM elements within an iFrame
See more linked questions

965
How to allow only numeric (0-9) in HTML inputbox using jQuery?
594
How to allow <input type="file"> to accept only image files?
1342
How to manually send HTTP POST requests from Firefox or Chrome browser
1158
In Node.js, how do I "include" functions from my other files?
1372
How do I reformat HTML code using Sublime Text 2?
1220
How do I get ASP.NET Web API to return JSON instead of XML using Chrome?
738
How to set a JavaScript breakpoint from code in Chrome?
1418
How does Access-Control-Allow-Origin header work?
1
Allow chrome to access local files for cordova testing